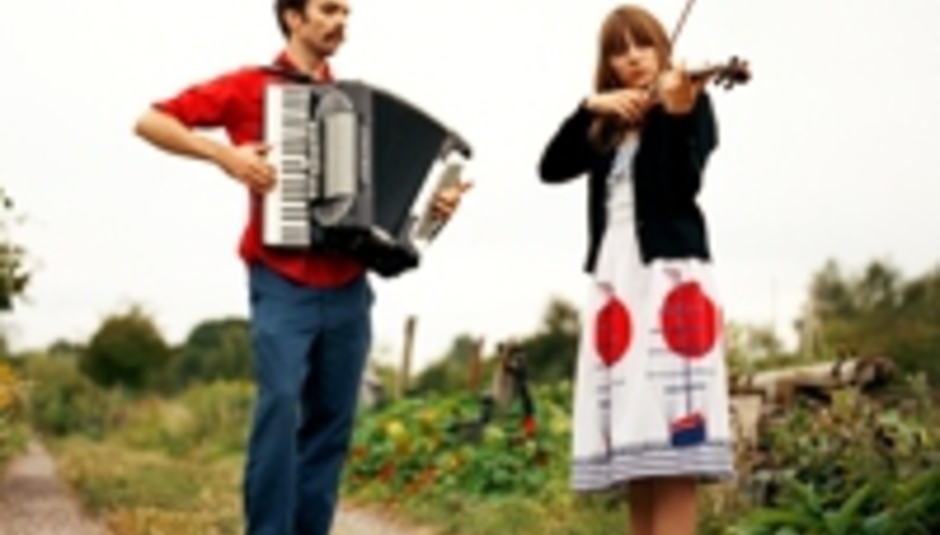 A Hawk And A Hacksaw: "I want to go to Transylvania"

A Hawk And A Hacksaw: "I want to go to Transylvania"

A Hawk And A Hacksaw is Jeremy Barnes and Heather Trost. To date, the pair has three albums beneath their belt: 2002’s self-titled debut (later re-released, in 2004), 2005’s Darkness At Noon, and last year’s acclaimed The Way The Wind Blows LP, released through the excellent Leaf label. Click here for the DiS verdict.

The duo are touring the UK from this Saturday, May 5, with the Hun Hangar Ensemble. Full dates – sponsored by DiS and Wire - can be found by clicking here, or by scrolling to the end of this here article.

Jeremy Barnes answered a few questions ahead of the tour.

How did you come across the Hun Hangar Ensemble? Is this forthcoming UK tour an exciting one for you? Have you played live with them yet? What should those that have seen you as a duo expect?
We met them in Budapest, at a venue here called Fono. They listened to our songs and liked the style. We drank some wine and ate goose skin and bone marrow. It seemed to work. We are excited, yes, about the tour. I have never had a pig carcass on stage with me before.
Our sound with the Huns is different from the duo - I suppose it is of an older vintage. I am playing the drums less, and the cimbalom has become the main percussive element.

There’s an EP in the works, too, so presumably this is a relationship that’s got legs, as it were?
Indeed, I suppose it has legs, although the only show we have done was at a small village in Hungary where they were commemorating an 1848 battle with the Serbians.

Included on the EP is a 20-minute documentary - how was that experience, being followed for such a project?
We filmed all the tour footage ourselves. Yes yes.

Have you been at all surprised at the reception for both your previous LP and the Beirut record last year? Has an appreciation of Balkan-influenced music been brewing for a while?
I am not surprised by the reception, but I am surprised that people are not searching out more Balkan music - Taraf de Haidouks, Trifan Trifanov, Rembetika, old Kelzmer recordings, etc. In general people should investigate more non-western music, whether or not it is in fashion at the time.

How is being part of the Leaf family? Do you find the label’s incredibly varied roster particularly refreshing? Do your own musical influences generally come from genres beyond those you operate within?
I think that the best record labels are the ones whose roster looks like a great record collection - the kind that is not obsessive with only one genre. I think leaf fits into that very well.

You’re touring Europe following the UK dates - where do you generally find the best crowds? Presumably playing primarily instrumental music aids an artist, rather, in crossing language barriers…
In general, England is one of our favourite places to play. It feels a bit like coming home. I enjoy the Welcome Breaks much more than Little Chef, but the Italian version of Little Chef is miles ahead. I like to imagine Keith Moon walking around London with a top hat.

Have you found the internet - social sites like MySpace, for example - an invaluable aid in spreading your music?
I don't really understand what it all means, but sometimes brass bands get in touch with us, or one-man bands and such. I like to just wait and see who will contact us. Someone from Mongolia or Peru, hopefully. I haven't really figured out how to use it in the fashion that it is intended to be used.

What does 2007 hold for the band after these dates? Are you already thinking ahead to album number four?
We are living in Budapest for now. It is great, and there is some amazing music here. I want to go to Transylvania. We just got back from Belgrade and I would like to spend more time there. I want to go to Istanbul. I miss my family. Somewhere in there we are going to do a record at one point.

A Hawk And A Hacksaw’s UK tour dates are as follows (all with The Hun Hangar Ensemble):

Check AHAAH out on MySpace, here.