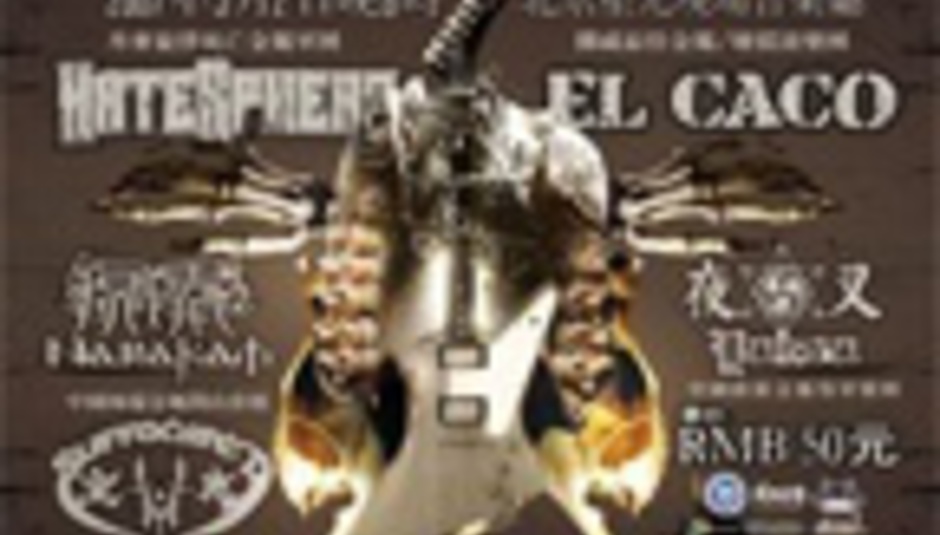 Here’s the deal: HateSphere are a metal band from Denmark; they are “666% pure Danish fuckin’ metal”, actually. They have a MySpace page, right here. They have an album out through SPV called Serpent Smiles And Killer Eyes. You can buy it, now, if you like.

Here’s the why: the band – Jacob Bredahl, Peter Lyse Hansen, Henrik Jacobsen, Anders Gyldenohr and Mikael Ehlert – are touring China. Right now. Today. In fact on the day in question, May 2, they’re playing in Beijing. Wow.

We asked the band to provide us with something of a diary – or a blog in your internet yoof speak – of their experiences in China. Below is part one. Yeah.

We had our release party (in Denmark) last night, and what a party! More than 300 people showed up, and all were in a good party mood. No wonder since there was free beer from 9 to 11… everybody got pretty wasted

We showed our new video, ‘Forever War’ to the crowd, and of course played the new album – loud! It seemed like people enjoyed it. We also had a competition, so the clever ones could win the new album.

All in all, it was a good night.

Earlier on the day we had a signing session in the local guitar shop, which was pretty crowded, too. One lucky guy won a signed Schecter guitar – and he actually had a show himself the very same night, so he was very happy to perform with his new guitar. Yihaaa!

So, to our travels: my army bag is packed and I’m ready to go to China and rock the fuck out. Just need to finish up interviews here...

China? We don’t know what to expect. Hopefully it’s gonna be a hell of a ride. We are actually the first hard band ever to play five shows over there, so it’s metal history, ha ha…

We are all so excited about it! I am pretty sure that it’s gonna be something very unique. I will keep you updated as soon as we arrive and have played the first show.

Our schedule looks something like this:
May 1: Midi Festival, Beijing
May 2: The Star Live, Beijing
May 8: Zhengzhou
May 10: Xi-an
May 12: Shenyang, afternoon show

I´ll be back! Cheers for now…