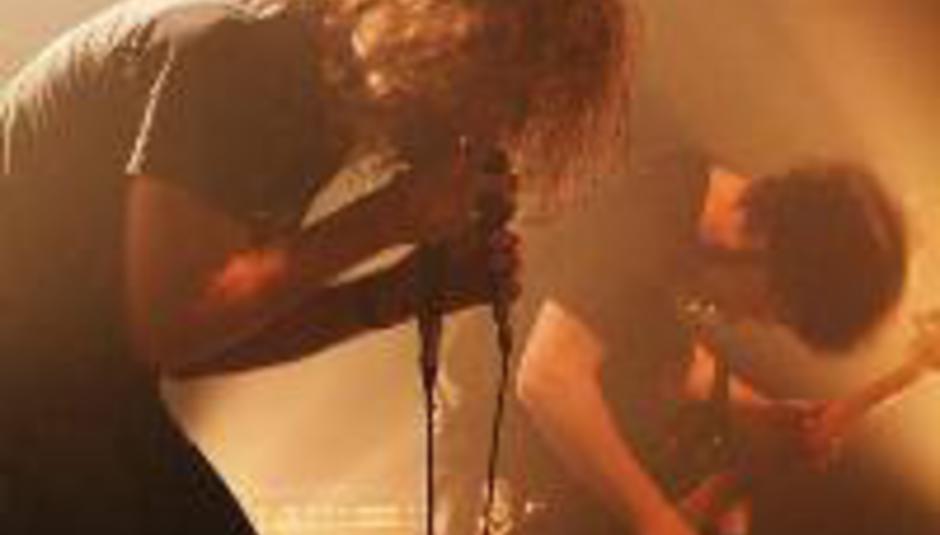 Wolf Eyes are a band your dad won’t like. Unless your dad is Thurston Moore. Sometimes I wish he was my dad. My dad, sadly, has fondness for few bands beyond Emerson, Lake and Palmer and old-school Genesis. Genuine sad face.

The Michigan trio – Nathan Young, Mike Connelly and John Olsen – released their second LP for Sub Pop last year. Human Animal is an endurance-testing, patience-torturing, sonically-punishing mind fuck of an album; it is to popular music what a trio of toddlers armed with semi-automatic machine guns are to a pre-school classroom. It. Is. Wrong. Yet so very, beautifully, disastrously, peerlessly right. Just don’t play it at a family barbecue.

Widely regarded as the chief denizens of the noise-core scene, a band that many other exponents of the fringe genre both admire and maybe hope to emulate, Wolf Eyes began as Young’s solo project. Aaron Dilloway joined in 1998, leaving in 2005, and Olson became a member in 2000. By this time the band had already released a number of cassettes and a split 12” with one-time-member Andrew W.K.. Connelly, also a member of “sound assault group” Hair Police, joined the band in 2005.

With a stunning amount of material behind them, Wolf Eyes are one of the most productive bands you’re ever likely to stumble across in the most indie of record stores. Last year, they were also one of the hardest-touring acts around, clocking up too many air miles to mention. This year they play two DiS-sponsored events in July: Birmingham’s SuperSonic festival, with Mogwai and Qui, and the Dour Festival in Belgium.

DiS caught up with the three-piece in a London pub ahead of their show at the capital city’s Underworld venue for the fourth instalment of Either/Or.

No Fun Fest or a load of fun fest?
John: B! Loads of fun, yeah? Have you been to a No Fun Fest? They’re loads of fun, killer. The No Fun Fest is loads of fun (link).
Is that a yearly thing?
John: Yep. We’ve done it the last three times. Three times a lady, player. We’re not ones to turn down a good time! And it’s totally fun.

Self-release or leave it to a label?
Nathan: I guess we prefer doing it ourselves. It’s nice to do both, but one’s not really a preference.
John: If we can bust ourselves, we straight will. Now we’ve got the time, our next thing will be done through ourselves.
Nathan: Ideally when you work for a label you want them to work for you… you’re hiring them, as it’s our money in the end. That’s ideally what you want – you don’t want someone trying to control you.

Hair Police or NWA’s ‘Fuck Tha Police’?
John: That’s a tough one man, but I’d go with Hair Police.
Mike: Thanks man, I appreciate that.
John: They’re both amazing, though…
Nathan: If Connelly wasn’t here I might’ve said NWA.
John: Did you see them last time they were in London?
No… who, NWA?
John: No! Hair Police…
Oh, no… I’ve seen them at ATP though.
Mike: You know I’m in the band yeah? You’re all talking like I’m not here! Yes, we played ATP in December (Thurston Moore’s The Nightmare Before Christmas).
John: What would you say, NWA or Hair Police?
Me, well… present company accepted I’d say NWA.
Nathan: Well, NWA is pretty good.
John: But Hair Police always got something stupid to say…

Beer: American or European?
John: Duvel, man. Belgian stuff.
Mike: There is a lot of good beer in America, just not the stuff that’s exported. Look for micro-breweries, beers like Harpoons IPA.

Battles: prog-rock for dads or future dance music?
Nathan: Both!
John: It’s Braxton’s son, so we’re biased… the drummer plays with his cymbal really high, and they’re nice guys. We’ve played with them a few times, but never in America. Nobody knows about them in the States. It’s the difference between tech and The Flintstones – and we’re ready to roll some rocks.

Festivals: do you prefer an indoor stage or outdoor stage? You’re playing a few outside… SuperSonic, Dour…
John: The Dwarf Festival? Wherever there are more girls at. You play an outdoor festival in Paris, oh boy. You’re hoping you had a third eye…
Nathan: We’re trying to do a little less this year. Last year we toured a lot.
John: We’re playing with Negative Approach in Detroit, at the end of May, before we come back here. We don’t play Michigan that much anymore, although it’s great not playing at home so much. Every year, in the past, we’d play twice a week at home. But pretty soon your friends are, like…
Nathan: “I’m not sure I’m coming out this time, let me know how it is…”
John: Google me the YouTube! When it gets to nine o’ clock, and ladies are looking at their watches…

The pop single, as it is today: a worthwhile medium or a dead format?
John: Have you heard ‘SexyBack’ by Justin Timberlake? I think that’s pretty effective. Yeah man, the single. We got double play on our single, ‘cause Nate cut out the song and cut over it – it’s two for one, a cycled single. Downloading? I have no opinion on that either way… I couldn’t care less, really.

Visit them on MySpace here, or at their official website here. Previous Either/Or articles as follows: