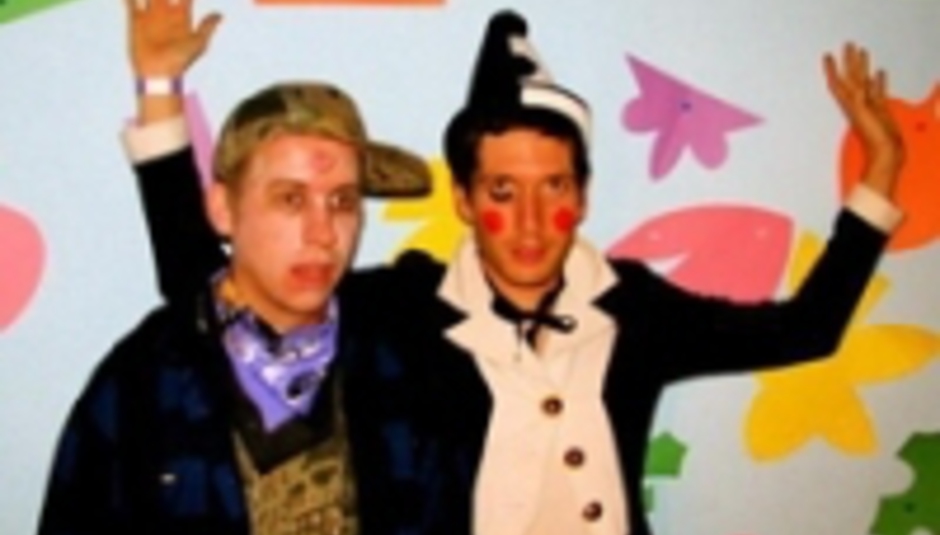 A short brutal romance: so invigorating. After three London appearances on a debut UK tour in 2005, the brief affair with Wives was over.

The Los Angeles trio’s debut long-player, Erect The Youth Problem, was a tantrum-ridden new-wave punk masterpiece that had a brilliantly self-destructive quality. And so, whilst divorce seemed suitable for those bitter gentlemen, No Age, consisting of former Wives associates Randy Randall and Dean Spunt, is a change of tact; the pair’s rasping punk of old now fused with delicately distorted melody.

DiS joined them on their recent UK jaunt, at Shoreditch pocket-pillager The Old Blue Last, to discuss their reincarnation.

London witnessed Wives’ swansong (review). Is it nice to be back?
DS: Yes, it’s awesome to back. I feel there is a lot to accomplish this time, and in a way this is finishing the business that we started. I think we may have left it unclear what our intentions were.

Was there ever an intention for Wives to be such a short-lived venture?
DS: I think in our sets it had a brutal element, but we never intended to come over and break up. That was unintentional.
RR: It feels really good to be back and have the chance to play again here, because we weren’t at our best with Wives.

Are there any focused aims with No Age, and have you achieved any?
RR: Not really. We’re interested in building things and then destroying things. I think No Age allows us an area to elaborate on ideas that maybe take more time to talk about than I think Wives allowed us, as opposed to just fucking everything up and leaving it destroyed.
DS: There are definitely a few more breadths to No Age.
RR: It’s like listening to someone yell something truly urgent, but then when someone has something a bit more in depth and meaningful, a little more thought goes behind it; it needs that time. I think we’re giving ourselves the space to explore more ideas.
DS: With Wives, we wanted everyone to hear. We wanted to say, “this is Wives”, and for people to pay attention. But now we’re more focused on making the music, and that if people are interested that’s cool.
RR: I’ve learnt you cannot force things down throats. I tried, and I did, but it doesn’t make you feel very good at the end of the day. Then again, maybe they liked it. Either way, sometimes a sledgehammer works and sometimes a scalpel works. It depends what the task is.

Nice analogy. The Get Hurt EP is far more lyrically sparse and has a far more delicate touch than the work of Wives. Was that a conscious decision?
DS: Really, it’s a completely different band with a completely different approach, so I think that makes sense. Randy and I were in Wives, but I think the direction of the music is coming from a different place, one that just made sense. I said a lot in Wives, but also, physically, there’s the fact I’m playing drums and singing now.

Is there still a temptation to play Wives tracks, or has that been firmly left behind?
DS: I am firmly okay with not playing any Wives songs. Being 25 and in London right now, everything is different.
RR: I think the last time we played those songs it took a lot out of us; our heart wasn’t really there.
DS: We were the best Wives cover band we could be at that point […]
RR: […] because the spirit and the soul of Wives was left in Texas. We put a lot into the band and it was good for what it was and I’m glad that we did it, but at this point I just think we can leave it behind.

Do you think No Age is going to last longer than Wives, then? Is it a case of taking a concept and moving on, or is this it for now?
RR: No Age allows us to look at many concepts, ideas and projects.
DS: When we started, though, we didn’t want to put any limitations behind us. I don’t think we have confined ourselves to just one idea.
RR: Wives were a rock band, whereas No Age is a creative collective that exists more as a concept. We’ve curated a group art show in Los Angeles under the guise of No Age, and we’ve been working on film projects for visual art that fall under the name of No Age. It makes sense, whereas Wives would have been out of place.

No Age continue to tour these isles, off the hind of debut UK release Get Hurt (reviewed here). We insist on both accounts. Dates as follows: