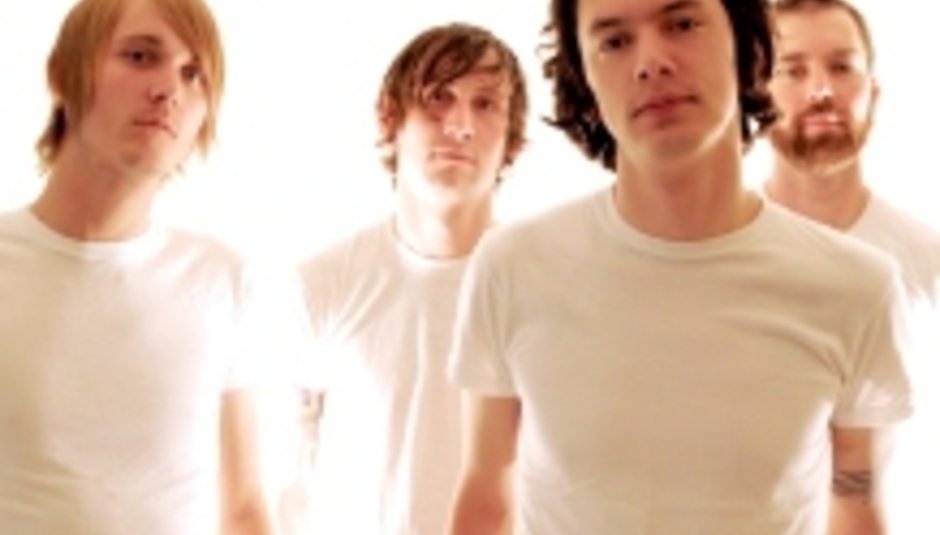 These Arms Are Snakes: proactively unprecedented

These Arms Are Snakes: proactively unprecedented

‘Unconventional’ doesn’t really do These Arms Are Snakes singer Steve Snere justice – the man regularly appears possessed while on stage, week in and week out, night after night after night. About him, a trio of musicians grind out electronica-tinged alt-rock from another dimension – elements of hardcore can be identified, but this is no chest-beating knuckle-dragging act. TAAS are innovators; they operate on a purely proactive level, resistant to writing their music in a reactionary fashion. Appropriately, they’re never likely to be vogue; this is music of few compromises, of jagged angles and twisted edges.

Yet in person – off stage – Snere is an absolute gentleman: in a north London pub he’s all smiles with DiS as said band mates – Brian Cook (bass/electronics), Ryan Frederiksen (guitar/electronics) and Chris Common (drums) – lazily sip drinks before yet another headline show, another exercise in executing the unprecedented. Hours from now Snere will be singing from atop a step ladder; at the moment, though, he’s entirely down to earth.

“We love it here,” says Snere of the UK, a country the band are steadily building a sizeable fanbase in. “We’ve toured the States so many times that we know people in every town, and they’re able to take you around to all the good bars. Here, we love London, and Exeter, but we don’t really know what to expect from anywhere. Sometimes we can play a town to loads of people, but return there months later and play to nobody. I just don’t know what that’s about. It can be really weird.”

Seattle-born TAAS are returning to the UK this month for a ‘co-headline’ tour with Chicago instrumentalists Pelican – click here for our interview with them. Although billed as a co-headline tour, obviously one band will play last, and in this instance it’s the Hydra Head-signed lyric-less quartet. But attendees in prior to the main event are sure to be entertained: TAAS don’t do subtle at their shows.

“I think we are picking up new fans,” says Snere. “I’m seeing people at our shows these days that I’ve never seen before, especially since the release of Easter. We’ve almost always gone on tour as the support act, with bigger bands, so it’s taken a while for us to realise who our fans were.”

“It’s way nice to be able to play to loads of people at larger shows,” continues Cook, “but you’re never certain what percentage of those people care about you. That is changing, though. We did six weeks in the States with Isis, and that was cool.”

The aforementioned Easter, released last year, is the band’s second album, and the first to be recorded with the current line-up; its 2004 predecessor, Oxeneers or The Lion Sleeps When Its Antelope Go Home, saw the kit manned by Minus The Bear’s Erin Tate (production was handled by Matt Bayles, at the time also a member of MTB). Previous to that, the band released an acclaimed EP, with yet another line-up, called This Is Meant To Hurt You, and a split with Harkonen. The split aside, all the listed releases emerged via Delaware’s Jade Tree label.

“Even at this point, we’re never just going through the motions,” says Cook, returning to the subject of touring. “We never take anything for granted. I guess it is repetitious – you’re always out of your comfort zone – but we never wake up and just go through a series of motions. We have peaks and valleys – a lot of the time I think everything sucks, but then I’ll wake up one day and we’re in New York and it’s, like, waaaheeeey. Although we do associate Florida with that feeling of urrrrgh, I wanna go home…”

“We are used to travelling now,” says Snere. “I feel totally at home coming over to the UK.”

“We constantly remind ourselves of where we are,” says Cook. “Some days, we’ve got it made. I could complain because we’re not playing sold-out theatres or that shit, but the Pelican tour will be our fourth time in Europe, and we’ve been to Australia and Japan and New Zealand… so when you think about it, everything’s cool.”

Easter is where much of the band’s current set is drawn from – as their latest LP, this would seem obvious, but anyone who has seen TAAS live already will know there’s a feverish demand for their older material at each show, particularly for tracks from This Is Meant To Hurt You. While TAAS have been known to sate the appetites of said hardcore contingent, rarely are songs played straight: the epic ‘Drinking From The Necks Of Your Loved Ones’, the EP’s closer, is drawn-out and distressed, Cook and Snere contorting its frame into something significantly more nightmarish. The soundtrack to serene dreams these songs most certainly are not.

“We were surprised at how well Easter was received,” comments Cook, “although it did seem to split opinion more than the first album. I actually remember seeing a piece on DrownedinSound, with all these pictures. I don’t remember what it said, though! I just remember the pictures…”

The mixed reception to Easter was easily predictable from a fan’s perspective – the band’s slightly altered line-up is obviously a factor in slight alterations in sound, but more than anything else TAAS are a band in a state of perpetual development. Their backgrounds – members served time in Botch, Nineironspitfire and Kill Sadie – imply that they’re unlikely to write music that repeats itself from record to record. It’s a truly tough record to second-guess on a first listen, even if you’re familiar with what it’s following.

“Some people get it, and some people don’t,” remarks Frederiksen. “It’s kinda balanced out. It is a record that I think people will come back to after leaving it after those first few listens. It’s tough to judge, really.”

“I am really, really happy with it,” says Snere. “I know people who have told me that it’s tough to take first time, unless you’re concentrating. It’s very different to what’s come before – we have a different line-up, and we had way more time to work on it. We had three months to really decide where we wanted to go, and having our own drummer was obviously amazing. We managed to determine what sucked before going into the studio, where we also had way more time. This time we had a proper idea of what we were going to lay down in the studio, whereas for the first album we were a lot more vague – that was really just about us getting this material we had on tape, just flushing things out.”

“For Easter there was more time to experiment. I’d be like, ‘Oh, I want to try this pedal,’ and I would,” adds Cook. Common worked as producer on Easter alongside his band mates, meaning that the four-piece were able to work flexibly, without being in a room with a producer with ulterior interests, or rather with less of a vested interest in the eventual recording.

“We have made a record that you need to sit down and be engaged by,” concludes Cook, “and we deliberately made it more mysterious, more weird or harder at times. You have to shift yourself, and you do either get it or you don’t. It is a record you have to invest time in, and we’re excited that it works on that level. It’s not as immediate as the live shows, but the songs do take on other guises live – we’re totally different beasts when on a stage.”

Witness the band’s awkward to pigeonhole alt-rock in the flesh later this month when they tour with Pelican – click here for full dates and here for the band’s MySpace page. Photograph by Robin Laananen.