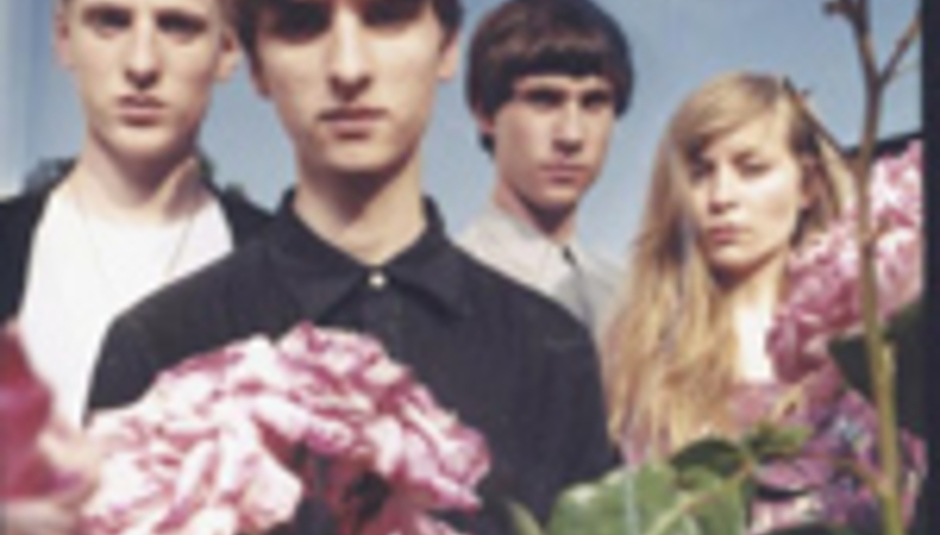 “Systems are dying. It’s all about the movement. Up and down, left and right. There are no lines anymore...”
Slaven Bilic

Facts: These New Puritans are from Southend. They are aged between 18 and 20 years old. They appeared on the Digital Penetration compilation. They have released one EP, Now Pluvial, on Angular Records. They are currently recording a debut LP and sporadically playing gigs. Now, I have two other things to say about them…

Firstly, I bow down to them, their way with rhythm and words, and their superiority to almost every other band ever. They carry a rare approach that it’s not the music itself but EVERYTHING that matters… all or nothing… playing music is no different from Renaissance science or 18th Century architecture… you can choose to draw influence on the whole of history or you choose none. With this attitude it is impossible to make bad music; the worst result could only be incoherence… with too many ideas, too much to experiment with that proper articulation becomes impossible; and even that’s a result superior to any of today’s generically bound fashionistas. TNP are exceptional purely because they cannot and will never belong to any scene, even though their release on the Digital Penetration lumped them in with the ‘new rave’ crowd. They recognize that drawing from the same narrow influences as your contemporaries is tantamount to incest; the gene pool narrows... weakness is exaggerated… the genetic flaws become clear to all… extinction is inevitable… musical Darwinism in perfect order. TNP are one band with ideas above all this. One listen to ‘En Papier’ or ‘C 16’ from their debut EP reveals as much.

Secondly, they’re a lot more friendly and witty than their words appear on paper. Most of the forthcoming overt statements were actually pronounced in a twilight manner; somewhere between irony and complete distaste, but said with such masked charisma and intelligence that you just can’t help believing their own hype. What I mean is… they’re no more self-centered than every band staring down the trembling barrel of an outstanding musical career should be. And, as one previous interviewer labeled them Fascists (due to a combination of top buttons, haircuts, and silly statements) I’m not surprised at their seeming distaste for questions, press, and other people in general.

Anyway, the interview. TNP talk like they play; singer Jack is wordy, drummer George is loud and confident, synthy Sophie is quiet but present, and bassist Tomas is fuzzy. And when I listen to them talk I feel as I do whilst they play: doubtful of my ability to fully comprehend the depth of their audio output. Brothers Jack and George field most of the questions and the following text is an amalgamation of them both as there seems little point in differentiating between whosaidwhat when it’s clear the strain of thought is emanating from the band itself, not the individuals sat around a tape recorder. It suits them; no compromise of communication, no concessions. After some initial niceities, mostly revolving around an old Ordnance Survey map of their native Southend-On-Sea, I chanced upon days before in a second-hand shop (I gave it as an icebreaking present), I try to gauge their depth…

Why sign to Angular and Domino then?
Loyalty… like the Shaolin assassins. Discipline… and loyalty. “Go with what you know” in the words of Frank Zappa. We get the best of both worlds: people who like our music and people with lots of money.

The reason I rate you is that you seem to carry a wider vision than most bands. Just the website, for example, covers music, literature, film… That was Now Pluvial. The whole website, and downloads. It all makes an oblique sense. But that era has ended – we’re beginning a new one. Why not stretch out and try and cover everything?

Yes! Some bands that don’t progress throughout careers – U2, Oasis, etc… Seems you’ve progressed more in under a year than most bands do during their entire careers.
Well, it’s not hard. Most bands just don’t think it through. They get some guitars and they sit around and jam. Then they play a gig! A GIG… It’s this whole strain of guitar worship I don’t understand. We’re only gonna play good gigs now not… shit ones.

Can I make you admit to musical influences?
Yes, but a lot of other interviewers like to ignore them. They don’t fit into the story they like to tell about us. At the moment it’s bands like Wu-Tang Clan, Frank Zappa, J Dilla. We find lot of American hip-hop find quite interesting.

A lot of bands don’t stray from the obvious generic guitar influences, but you seem to cover most genres… Or even ignore genres…
Yeah, and they’re mainly shit. I don’t like any bands at the moment. They either cover the most generic influences or they rely on pretending they’re literary… when they’re not. We try, instead of relying on other people for influences, to create our own world. It’s just a typical band thing now. Name-dropping of literature has is clichéd as saying we like the Smiths… but we hate the Smiths with a passion. And the Beatles.

How about the Stones, or Led Zeppelin?
Never heard of ‘em…

Did growing up in Southend have this outsider effect on you?
Yeah, it’s an insular environment. Its own little world. It’s like an island.

Well to The Casual Listener, you do sound similar to bands like The Fall, PiL etc…
Well, you can say what you like. I do like those bands. But I think maybe it’s because people haven’t heard of our influences. Bands like Einstürzende Neubauten, ‘80s industrial music, etc…

How about 2007 then? Bands you like as of now…
I suppose The Violets and Gang Gang Dance… there are some good, noisy New York bands. Apart from that, not a lot – it’s a wasteland out there. I really don’t like indie music.

So how would These New Puritans describe themselves?
A good point. You should write we are... musical and lyrical assasins. Like the Shaolin assassins. Say drums, guitars and bass and you’re halfway there… We’ve just bought a sampler, so now we’re samplists too.

They played a gig afterwards. The sound was terrible and they cut their set short. It was completely irrelevant, of course. The only matter of pressing importance now is that the unholy trinity of confidence, intelligence and justhavingafuckingclue is back in modern music. An album is being recorded presently, due for release sometime in 2007. For now, please start preparing complete redefinitions of the term ‘music’.

These New Puritans can be found on MySpace, here.