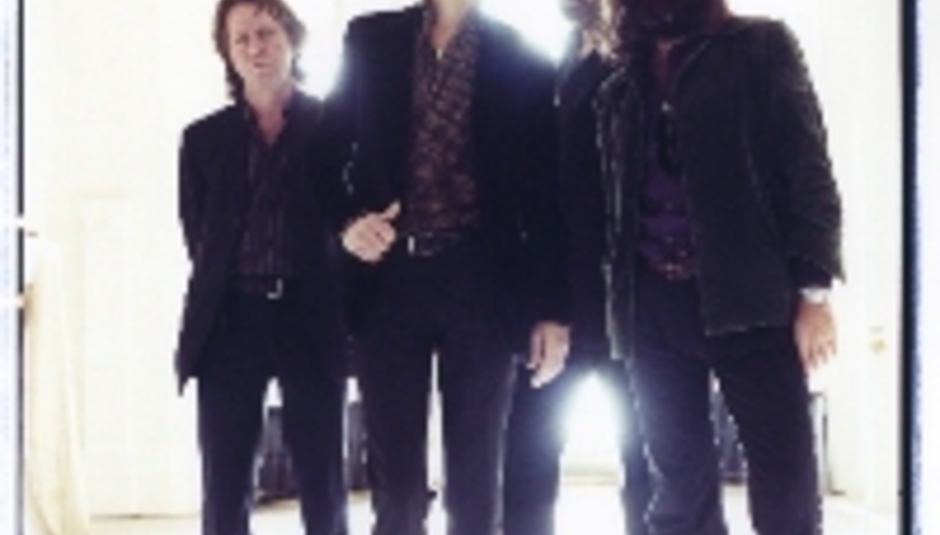 A blindsiding project, not a 'side project': DiS meets Grinderman

A blindsiding project, not a 'side project': DiS meets Grinderman

Grinderman: there’s something about the name alone that carries certain connotations. Rawness, aggression, weirdness; there’s definitely something about the moniker that pricks the hairs on the forearm and dries the throat. And that’s before the four-piece’s music’s been sampled.

Although the name is new to record store racks the world over, the members of Grinderman have been playing together for many a year. They are, in no order, Warren Ellis (also of Dirty Three), Jim Sclavunos, Martyn P Casey… and some dude called Nick Cave. Maybe you’ve heard of the quartet; it’s fairly fucking probable the latter, at least, rings a bell comparable in size with a small African nation. Every one of ‘em’s a Bad Seed; every one of ‘em’s got more on-the-road stories than Kerouac’s ghost. Wikipedia state’s they’re “garage rock” in their current incarnation; clearly their self-titled debut album hasn’t made its way to the online encyclopaedia.

Because that’s not the whole story; stories with such massive back stories are rarely so one-dimensional, so black and white. Grinderman is an evolution, a progression, a development; it’s happened naturally, organically, slowly. These songs have been housed within the band’s collective belly for month after month into year after year; they’ve been brushed by inspiration and re-plastered by on-tour travails as the four have toured Cave’s ‘solo’ show about the globe. This ain’t a garage band; it’s bigger, bolder, bluer than that. But it’s no straight-up blues act either – yeah the songs are hung upon hooks of fair maidens’ fingers, but for all the ‘woman done me bad’ overtones this kicks like a mule tethered to Richard Hell’s drinking arm.

Did Hell drink a lot? Doesn’t matter any: point is that to pin Grinderman down, to push them into pigeonholes as simple as those that pop up when an album’s filtered through iTunes (‘rock’ is the best it can manage in the case of Grinderman), is to sell them so short that they’ll take offence to the tune of coming around your house and drowning your pets. Perhaps. Succinctly: this is neither a punk-rock nor blues project, it just is.

Says Sclavunos, in London alongside Ellis and Casey a good month prior to their album’s release: “Grinderman is neither blues nor punk. The punk thing doesn’t have anything to do with it. Punk-rock as a freedom? Can’t that freedom be an aspect of a lot of musical movements? Like free jazz, and early rock and roll, psychedelic rock, you know… you name it. To say ‘punk-rock’ implies a certain style, and certain connotations come into play. And we’re not a blues group, although we have a deep, abiding love for the blues. We love and respect it, so it probably did inspire many aspects of the record… but it’s not a blues album.”

And that concept of the ‘side project’? Yeah, don’t bother with that, either; there’s no definite line marking where the Bad Seeds – at least these four – end and Grinderman begins; the bands run in parallel, with both facing futures full of possibilities. Grinderman is not the beginning and the end of this adventure; it’s the former, certainly, but its epilogue is a long way from being set in stone.

“This definitely isn’t a side project,” says Sclavunos. “It has its own legs and does what it wants to do; it exists autonomously and simultaneously.”

“People have got to be imaginative, and not be moronic about it,” adds Ellis. “I’d like to give people the benefit of the doubt. And we’re not a ‘super group’ either, as we’re all in the Bad Seeds.”

It was during Nick Cave’s solo dates that the Grinderman ‘sound’, if you will, came to be realised: heavy on organ and deep of groove, yet visceral like the fizziest protest punk this side of The Make Up. There’s nothing particularly political or spiritual about Grinderman: it’s a record to get up and down to, to wallow in and writhe away from. It’s a record for dancing and ducking, diving and skiving; it’s a record for grinding to. Says Ellis of the record’s gestation:

“We’ve been playing together, in this line-up, for a number of years. We liked the sound that was coming on – we were doing Nick’s solo shows – and wanted to see what would happen if we went into the studio. We’d been pushing the songs of Nick in certain directions.

“I guess you also forget that the live stuff you do… people aren’t as up to scratch with that as your recorded output, so for a lot of people, unless they saw the Nick Cave solo show, they might be unaware that this has been happening. I mean, we’ve been playing this all over the world. Nick’s been doing a solo show for some years, and that’s why it feels like this is dumped on everybody… but it’s been brewing away for ages, and now it’s led to this. It certainly didn’t come about through frustration at the Bad Seeds – Nick’s writing a new Bad Seeds album, and the band’s very much there still. But it all seems so kind of natural – last year we toured so much with this band.

“It’s not a new band – people know Nick, y’know. It seems like a continuation of a musical quest, of a musical development and that. Like I’ll go and do the next Dirty Three record, and doing this will have helped me. The day you feel like you’re not bettering what you’ve done, maybe it’s time to stop… that, or you’re satisfied doing the same old crap over and over. I don’t sort of demarcate, like, ‘this is here and that’s there’, when I’m going into a session. I record the same way whatever I’m doing – I see this as informing the next record I make.”

While it’s a certainty that the men of Grinderman will be pursuing other musical pursuits prior to any second LP, they’re nevertheless confident that Grinderman will have a successor. “I think we’d all like to do another Grinderman record, the way we feel right now,” says Sclavunos, easily the most physically imposing of the assembled trio; like Cave he’s tall – very tall – but his demeanour is spiky. You’re never quite sure whether or not he’s walking you up the garden path, so to speak. Most probably to mug you and leave you beaten in.

But what’ll happen if Grinderman exceeds the success these musicians have already enjoyed?

“You mean what are we going to do when it goes number one?” asks Ellis. “What do you mean, ‘Not necessarily’? You little motherfucker!”

Now we’re laughing – I’m happy that all four men in the room are doing so as one, as while Ellis is throwing – pitching, really – sachets of sugar into my chest, he’s doing so with a broad smile slicing his ample beard in two. The last thing any sane man would want to do is get on the wrong side of these three – while there are flashes of tenderness to be found across Grinderman, the album’s opening brace – the singles, ‘Get It On’ and ‘No Pussy Blues’ – are aggressive in the extreme, compositionally. They’re works of confrontational fuzz, of super-amplified angst at the protagonist in question’s measly lot. This is not a band for your soft-rock loving friends and family. They will disown you for offering it to them as a gift. They will shun you at gatherings and festive occasions. It’s unlikely you’ll care, mind.

Are you worried, at all, that magazine critics will undoubtedly focus on Nick, and perhaps make the mistake of assuming this is a side project?

“I certainly hope that people don’t have to read a magazine to come to their conclusion about the record,” says Sclavunos, “but magazines do help, sometimes, to guide people to things they otherwise wouldn’t consider.”

Ellis adds: “I mean, you just do what you do… you’re not writing for someone else to tell you what it’s about.”

And what about the nature of music consumption today? People will pick and choose songs from the album, rather than listen to it as a cohesive whole…

“You put records together in a sequence that you think makes sense,” replies Ellis. “We come from an era when that mattered, when there was a shape to albums. You can’t do anything about people’s listening habits. We’re just stubborn and put things out the way we know. Whether we put eleven songs together in a connected or unconnected way, people are still going to take the ones that they like anyway. At least for the people that like it in this presentation – and we do – it’s there, y’know.”

Sclavunos concludes proceedings – the band has to get in a car and head elsewhere for further questioning. “You can’t control people’s listening habits any more than you can successfully interpret the lyrics to a song. We’ve done our part, and now it’s out there in the public. They can make of it what they will, as they do.”

That they will. Unless they’re absolutely enamoured with the safe, mainstream rock of Virgin radio and Q magazine, chances are they’ll take a shine to Grinderman. That, or they’ll have a right shiner in the morning.

Grinderman’s self-titled album is released through Mute on March 5 – the singles, ‘No Pussy Blues’ and ‘Get It On’, are available now through the very same label. The band play the first ATP weekend this April, curated by Dirty Three. For information on ATP click here, and for Grinderman’s MySpace page click here.