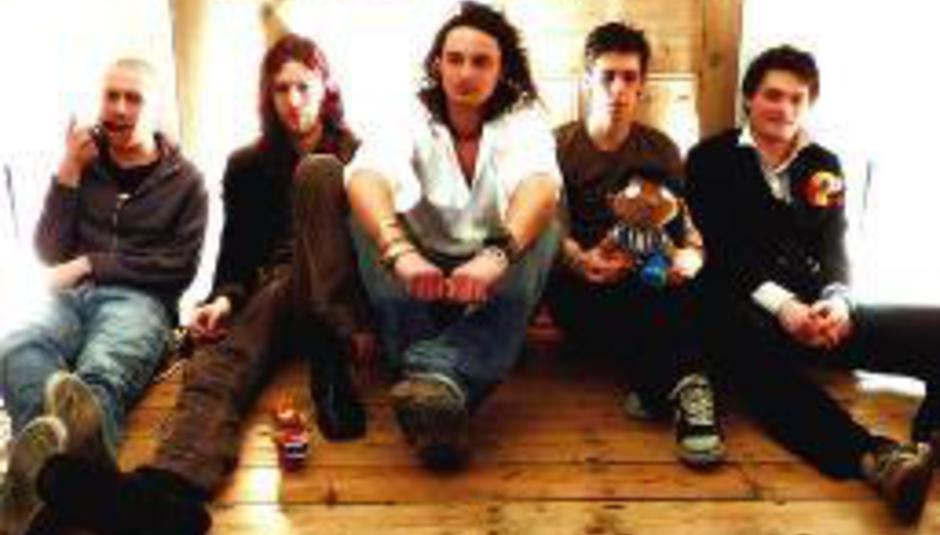 twentysixfeet are a capital city collective with skyscraper-proportioned ambitions – one listen to their widescreen electro-punk-rock is all it takes for the uninitiated to be overcome by cricket-click beats and guitars that go so beyond eleven. Then there’s the vocals – sublime one moment, supremely coarse the next. This is a band that demands to be taken seriously: they’re amazingly accomplished on a technical level, and live they all too often leave mouths agape in utter disbelief.

But do not take these words for it: the five-piece – Dan, Matt, Beorn, Ed and Alex – are playing the DrownedinSound.com-presented DiScover Club, at London’s Notting Hill Arts Club, this Saturday. The free-entry show, run in conjunction with Rough Trade Shops, opens at four in the afternoon – do please click here for further details. You are therefore encouraged to take a trip to west London this weekend – those that make the minimal effort to ride the lines that make up the city’s Underground are sure to be rewarded with an experience to remember. Somewhere between the epic metal of Deftones and the laptop-driven post-rock of 65daysofstatic, twentysixfeet are quite unlike anything else you’re likely to have witnessed before.

Before you head out to get down round Notting Hill way, though, DiScover twentysixfeet…

Hello the band known as twentysixfeet! First up: does the name have to be written that way? You and people like 65daysofstatic, you don’t half mess with my spell checker…

(All answers by Ed.) Hello. Yes, it has to be spelt that way or we don’t answer; we just turn our collective back and ignore people. Gets the message across, like. ‘tsf’ is acceptable however.

Secondly, who is who in the band? Who does what, and how and when did the band get together? I’ve seen you around London a few times, but do you get to tour elsewhere often? Do you think that London is the place for new bands to find their feet, or in this age of internet availability, is where a band’s based not so important?

Well… Dan plays guitar, messes with the laptop and sometimes wears ill-fitting trousers; Matt plays bass and stamps about; Beorn sings and works on his massive ‘guns’; Alex hits drums and tries to communicate through grunts; and I, Ed, play guitar and attract flies.

The current line-up has been going for about a year and a half. London is a great place for new/young bands, but there is the risk of getting lost between the cracks and you sometimes feel like the tide of identikit music-by-numbers bands will wash you away. Sometimes not – it depends on your attitude, I guess. We went on tour in October last year with Immune, and we’ve played all around the country in many odd places. Got as far as Paris and turned back due to Ed’s Farmer Giles...

The internet is amazing for DIY purposes – we’ve met many people all over the world who can plug into our sound, which would have taken a lot longer otherwise – but often people who use it are no more discerning than people who listen to the radio, so it has to be a mixture of talent and bald-arsed luck to catch people’s attention.


The band’s pretty, well, all over the place, certainly live – clicks and licks and beats and pieces. How do YOU describe the noise the five of you make? Are there certain acts that you’re compared to on a semi-regular basis? And are these comparisons flattering?

The main bands we get compared to are Radiohead, Deftones, The Mars Volta and 65daysofstatic… All of those are pretty flattering, really. We recently got compared to Faithless playing prog. Now, if that is not the single most insulting comparison you have ever heard of, I will sex a Rottweiler’s mouth.

You’re able to conjure a very heavy sound, a very dense sound, yet the electronics that cut through the guitars are usually quite, well, crickety… if that makes sense. I guess I’m talking about balance – the band could, clearly, be very metal, but there’s a balance that stops songs becoming made simply for the mosh. There’s much more to them – is it easy finding this balance?

No, it’s not. It’s a constant battle of ideas, instincts and very ugly insults. We have ideas and they get stretched all over the shop – sometimes we get the mix we are all happy with and sometimes we grind the dissenting person down until they weep. It’s all good fun.

I, personally, am always trying to turn us into a Celtic Frost tribute act, but no one seems interested most of the time.

Two Hours Of Passionless Tango (review) came out last year – were you happy with its critical reception? Most reviews I read were favourable (I think Rock Sound knocked it a bit, but that’s it) – do reviews mean a great deal to you at all? What’s going to follow the album up… or the mini-album, if you like? What other releases can punters purchase from you?

Yeah, it mainly got good reviews but it also got reviews that didn’t really know where we were coming from. But that’s a reviewer’s prerogative, innit. The Rock Sound thing was funny because the next month they reviewed a live show and said we were ace, which kinda proves the point.

We don’t have anything else out at the moment but we’re going to be releasing a single in April or May called ‘My Dead Organ’ – it’s a bit of a commentary about some of the people you meet in this business that you’d really be better off avoiding full stop.

We’re always writing new stuff and hopefully we’ll have enough for an album by the summer. We’ll see where it goes from there.

Are people ever taken aback by the band live? I know the first time I saw you I wasn’t expecting everything to be so… intense? Are you generally more comfortable on stage than in a studio? Relying on electronics/computers as you do, you must have fallen foul of the odd computer cock up…?

We played in Romford towards the end of last year and the bouncing around on stage turned the laptop off. That was, erm, interesting. We all like being in the studio but playing live is a far more instant gratification: it’s been said a million times by a million bands, but playing a show is something that affects your mood and attitude for days after. We just put as much into it as possible. As long as you manage to hold it down.

It’s still early in 2007 – what does this year hold in store for twentysixfeet?

Looks like the single, then a tour, then an album, then as many festivals as will have us, starting with a London-based one next month. Then another tour over summer and then maybe Europe proper. Apart from that, not a Scooby.

twentysixfeet can be found on MySpace here; they, alongside October All Over and An Emergency, play March’s DiScover Club at the Notting Hill Arts Club, London, this Saturday March 3 – click here for details and to add the date to your gig calendar.