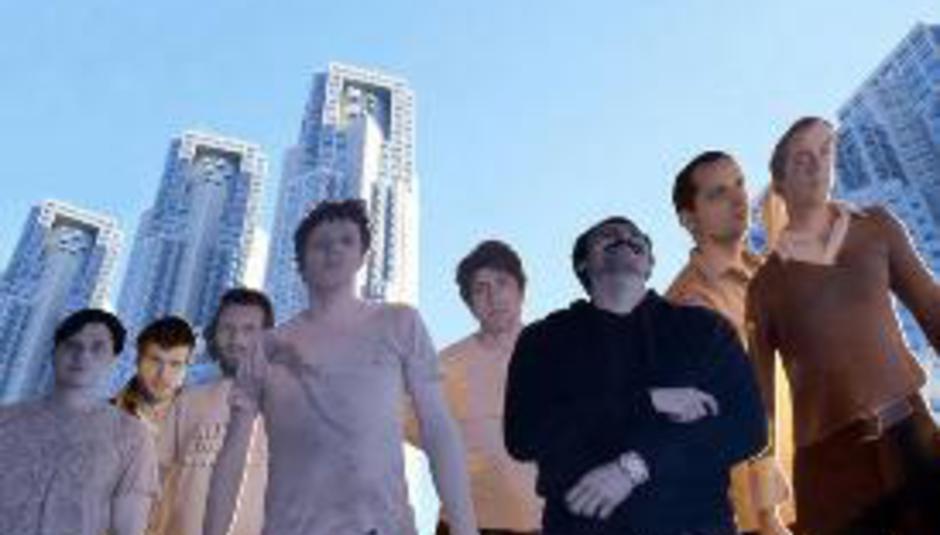 !!! are a band whose reputation precedes them – scintillating live performances have left onlookers slavering for on-wax renditions of what they’ve just lost their minds to, and their Warp-released album of 2004, Louden Up Now (their second following a self-titled effort through GSL three years earlier), left critics and substance-swilling acolytes of their incessant dance-punk fully sated. But three years is time enough for opinion to shift – in hindsight, Louden Up Now perhaps wasn’t the peerless, damn near unprecedented record the likes of this writer felt it was at the time; perhaps, if we’re all absolutely truthful, it didn’t totally deliver on the promise of the septet’s gigs.

Myth Takes re-sows the seeds of love. It pumps the heart full of adrenaline and pulls the head through tunnels of flashbulbs of purple and pink and ochre; it tosses the listener into the middle of a dancefloor and unleashes all manner of madness about them; it’s the best house-party album in the world… ever; it’s the hedonist’s aural handbook to A Good Fucking Time.

DiS meets the band’s vocalist, Nic Offer, in London ahead of a date with labelmates Maximo Park; the remaining members – John Pugh, Allan Wilson, Mario Andreoni, Tyler Pope, Justin Van Der Volgen and Dan Gorman – leave us to our tête-à-tête beneath the hotel bar’s buzzing television. It’s Sky News, or something; probably something about bombs or death or misery. There’s next to none of that about Myth Takes.

Myth Takes is going down a storm in the DiS office. How’s the reception to it been, generally?
It seems like we’ve finally made a record worthy of our reputation. We’ve always had a pretty stellar live reputation, but everyone’s always complained that the records haven’t matched up to it. I feel like this one does, and also like we pushed ourselves on it. We forced ourselves to communicate with each other, and to get further out and challenge ourselves. I think everything worked, and that’s how we have to make the next record as well – we need to face up to challenges and get through them.

The record’s a lot denser – a lot thicker – than the previous long-player – how’d that come around?
Justin, the bass player, produced this record, so we had someone central. The other records were shipped around to different people; this time everyone was able to get their ideas across better. I can’t say enough about communication, and how it pushed this record over the top – people were able to get their ideas out.

Was it a totally positive experience having a member of the band produce the album? Is it not sometimes good to have an outside opinion on the material?
We don’t necessarily have too much to compare it to. In a way we wished the producer wasn’t one of us, because sometimes it’s better to have an outside authority. But at the same time he ultimately… it’s so hard to find people that understand where we’re coming from and what we do, so inviting some other person in can be touchy. So in a big way he was the only choice for us, and he’d just finished the Outhud record, which we felt he’d done an incredible job on. Not only is he one of the best producers out there, but he’s one of us, so it made sense to use him… and it kind of works. I do believe it switching things up though, so as not to get stuck in any ruts, so if something else did come along… We make it up as we go along, so we’ll see what happens.

Do you think, with Myth Takes, you’ve finally successfully captured the intensity and ecstasy that’s conveyed in your live shows?
I think we took a much liver approach into the studio. Now we pretty much jam straight into the computer, so if something happens, we have it! I feel that’s more live than anything else – it’s like jazz. The idea’s never fresher than at that moment. We always had that problem of getting way far out there on a jam on a tape, and then trying to recreate that sound in a studio… there are just some little vibe things that can’t always be recreated. But now we have that – like the first song (‘Myth Takes’) is a jam loop with a song written on top of it. If we’d have tried to recreate that in the studio, we wouldn’t have gotten that eeriness. I think that riff was only played that one time – we snagged it right there!

With members based all over the place – in California, Portland and New York – is it hard to find time to get together and practice, or jam?
We don’t jam that much on tour, really, just because soundcheck’s always a hassle, and then there are pesky interviews to deal with (laughs)! But we pick times to get together and then work for a few weeks. We all work at home, and people have computers that we record into. We do have long periods without each other, especially when we’re involved with our other groups. We do spend a lot of time apart, but I think it’s healthy – absence makes the heart grow fonder and all that. You’ve just got to use whatever’s thrown at you to your advantage, and that’s how any band has to do it. Every band is thrown a certain amount of breaks and a certain amount of hardship, and I feel like we’ve done okay considering! I feel pretty lucky!

Where do you envisage Myth Takes being digested? I hear it as a perfect soundtrack to the wildest house party this side of Animal House…
I think Louden Up Now was more of a party/club record, while this one’s definitely got some burning tracks on it. I feel like we’ve always made headphone music – it’s music to be listened to very intently. That’s the ultimate moment in music, when you can lose yourself in it – that’s what I live for, and it happens a lot on stage.

You supported Red Hot Chili Peppers in the UK last year, at massive shows – was that weird, playing before a crowd that, most probably, couldn’t give a toss about you?
I feel like we’re somewhat of a freak show, so they (the Chili Peppers crowd) had to try to figure us out. We only had half an hour, so they were like, ‘What the fuck’ for 30 minutes. We’re always really energetic on stage, and we swap instruments, so I feel like we did as well as we could. It was a challenge and we tried to learn something from it. We’d never done shows like that before – we’d played to a few thousand people before, but those shows were different. Do it again? It’d have to be the right situation? Radiohead? Yeah I’d like to tour with Radiohead! But I think they have a thinking crowd, open-minded people who like dance music. Snow Patrol? I don’t know Snow Patrol. Americans don’t know Snow Patrol! Oh, The Fray? I’ve heard of them. They sound like Coldplay or something, right? Payback’s a bitch, right!

And do you get the impression that there’s a bigger buzz about the band than ever before right now, that there’s a lot of anticipation for Myth Takes?
I think we know it’s a better record, and we’ve built on the last record a lot. I feel like a lot of people are anticipating this record, too, so that feels a bit bigger – we’re doing more interviews!

Finally, what the hell’s up with this ‘punk-funk’ bracket that slips around the band so often? Are you really happy with this tag?
Punk-funk? The thing is that everyone gets saddled with something, and you can’t fight it. The Sex Pistols hated being called punk, y’know. To me it’s just par for the course – the thing is that it’s your job to exceed that genre, to go beyond expectations, and I think we’ve done that on this record. We’ve pushed further than ever before.

Myth Takes is released via Warp on March 5; the single, ‘Heart Of Hearts’, is out now. The band are on tour in March, dates as follows:

Check out !!! on MySpace, HERE, or via their new website.