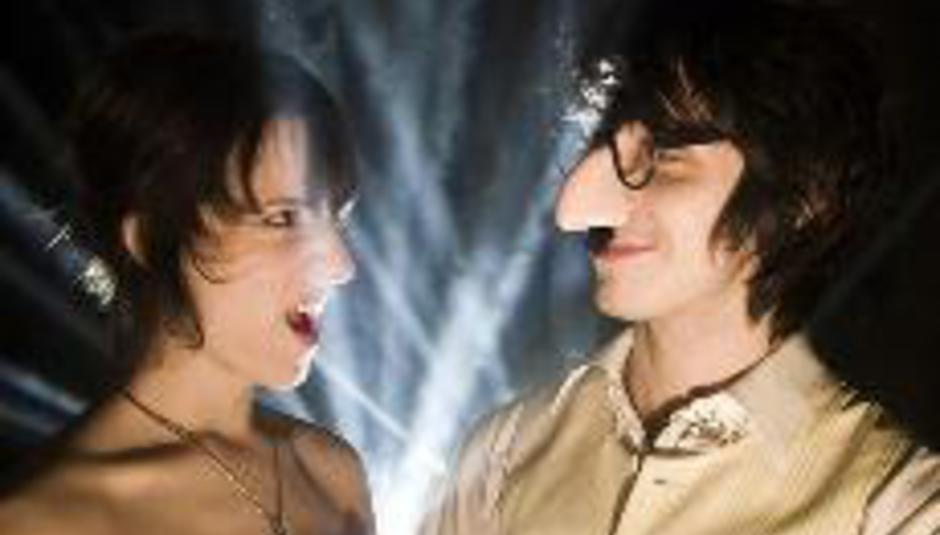 Forget Cassettes is, essentially, Beth Cameron; she is the constant that runs the course of the band’s existence to date, the spine from which its myriad limbs have spouted. The band is currently completed by Doni Schroader, also of And You Will Know Us By The Trail Of Dead, but their forthcoming LP Salt was recorded with a different line-up, as a trio.

“It was comfortable as a trio, and we toured as a trio too for a little while before Doni started playing live again, too, so there were four of us,” says Beth, backstage at London’s Koko venue where she’ll soon open for Trail Of Dead. “In the end Doni and I just worked best together, and that’s the way it started and after going and trying other things we realised that was the best way to do it. So we decided to keep it as a duo, but we will definitely be bringing more people on tour with us, to play more instruments, but the core will remain just me and Doni.”

The pair that departed post Salt are Aaron Ford and Jay Leo Philips; neither are a part of Forget Cassettes at present, but Beth has a never say never attitude to collaborations and recordings – the impression is that Forget Cassettes will continue to evolve from now ‘til album three and beyond, just as it did from their debut, Instruments Of Action. Both albums have been released stateside by Theory 8, but Salt will earn itself an official UK release via new label Tangled Up next week, on March 5.

I ask Beth how Salt found its way to the UK:

“It was pretty much an e-mail and a phone call along the lines of, ‘We’re interested in putting this out’. Tangled Up is part of One Little Indian, and my manager worked on the deal for a good two months before he brought it to me, because you do get people saying things all the time, and he wanted to make sure it was a serious offer that’d be beneficial. Once he thought it was a good time to bring it to me, he did, and of course One Little Indian has a really great reputation here, so it was kind of a no-brainer. A big reason I went with them is that they do put out records that really aren’t mainstream at all.”

What is and what isn’t classifiable as ‘mainstream’ these days depends almost entirely on individual taste – whereas Salt is heavily rocking in places, and Beth’s vocals bordering on the aggressive, there are pop hooks aplenty. Says Beth of where it’s likely to be racked in high-street stores nationwide: “Oh, pop definitely. I definitely focused a lot on melodies on Salt. I worked really hard on the intricacies, the melodies of the instruments with the vocals, and having them match. So it certainly leans on the side of pop.”

Previous comparisons to the likes of Yeah Yeah Yeahs and PJ Harvey aren’t entirely accurate – Beth sings in a guitar-driven rock band, but beyond that there are no real parallels – but the references don’t seem to bother Beth at all. “I think it’s more that people need some tangible evidence, or something to connect with,” she says. “It’s the human stigma – it’s hard to be born out of originality, so we have to connect things. I mean, that’s how we learn as children. It seems pretty probable that it’s going to happen, and although it does annoy me I know in the end it doesn’t really matter.”

She says that her vocals, forceful though they can be, are “not born out of aggression, ever”; looking at her you’d have to agree, as she’s petite and well spoken. A couple of hours later, though, she’s riffing her way through an impressive set, winning over a selection of fans in for the headline band only. She possesses a power that’s well disguised, a voice that can be immensely affecting when it needs to be and utterly restrained when the music about her needs to dominate proceedings.

As a pair, think of Forget Cassettes as the Giant Drag that grew up and got real – they’re fierce and fiery, emotive and engrossing. But they’re unlikely to fill stage time with dick jokes anytime soon.

Salt is released through Tangled Up on March 5; check out Forget Cassettes at their MySpace page, HERE; photograph by Jonathon Kingsbury