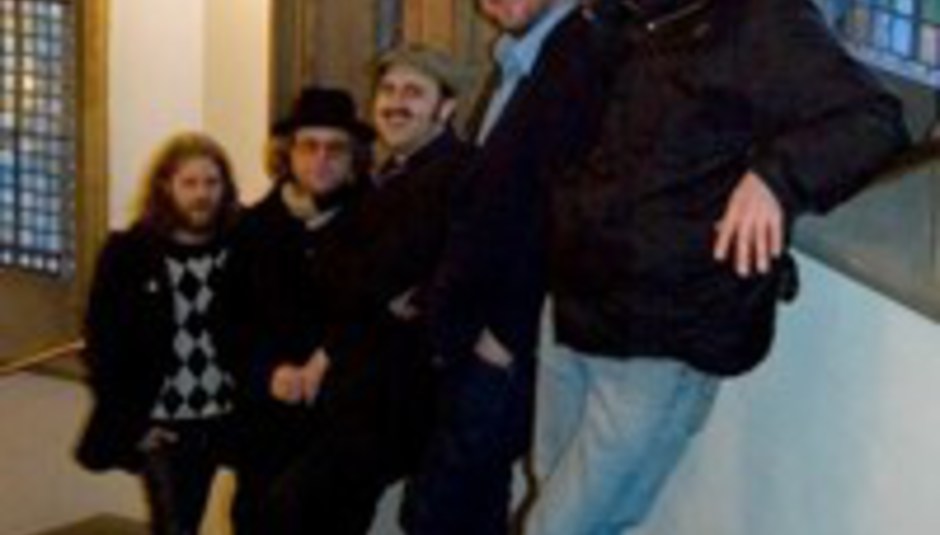 The Hold Steady welcome 2007 having released three albums in as many years; each one has been almost universally welcomed by punters and critics alike. They’ve toured just short of constantly around the recording of Almost Killed Me (2004), Separation Sunday (2005) and Boys and Girls in America (2006), but until this month they’d played just one gig in Europe, opening for Les Savy Fav and Todd in London in 2004. That night, sniffling indie kids, clustered-up clever kids, bartenders and bartenders’ friends on this side of the Atlantic got their first taste of what, for some, would become an addiction.

In December, plans were revealed for shows in Hamburg, Paris and Amsterdam in February, followed by a ten-date UK tour. In spite of the latest album having not been released, tickets for most dates sold out well in advance and another week was added, taking in more English towns; a fifth London date was arranged and the tour would finally end up in Dublin. To anybody who had been following The Hold Steady, the demand for tickets came as a total surprise. When DiS met with the band before the first gig of the long-awaited British tour, guitarist Tad Kubler was as stunned as anyone. _ “[BAGIA] is our first album to be released here, so when we came to Europe we really thought we’d have to start over again, play tiny clubs to fifty people. But the reaction has been incredible… totally unexpected.”_

The band attributes such phenomenal demand to see them prior to the record’s release to word of mouth, the internet and a few gushing advance reviews. As soon as the album was available over here, the music press were sent into a frenzy – with the exception of DiS, it should be noted – and it became an almost daily occurrence to read a five-star review of Boys and Girls… in the mainstream media.

To those that had waited almost three years for their second fix of The Hold Steady live, this tour was something to celebrate. From the centre of the crowd it is easy to spot devotees, or ‘Steadheads’ as the band do not want their fanbase to be known. Cheers of approval and quick glances of celebratory acknowledgement between friends met every note, every beat and every word.

DiS wonders what it is that hooks people in so hard. Tad suggests a lot lies in the vast world created by singer/lyricist Finn: “Craig makes people feel involved in what’s happening with these characters.” He’s concerned about interpretation, though. “People think these stories are about us, after shows in the US we get people coming up to us saying, ‘Hey we’re going back to smoke some crack’, and that doesn’t sound like a good time to me. There’s a certain point where you’re not having a good time anymore, and these characters are trying to get to some place better but maybe not down the right road… When you start going down that road, the house always wins.”

He tells us:_ “It’s a big romantic body of water. Mark Twain, right? You’ve got the oceans and you’ve got the Mississippi: rock and roll was born along that river. At 35 I realised that it was such a great historical place but when I was a teenager [like the characters in his songs] it was just these woods along the banks and you’d score a case of beer and drink it down there. It was very still and very silent and very scary. Bad dudes would hang around there, like transients, and if you took a wrong turn you’d come across campfires and condoms. That river is the lifeblood of America. There was always the idea that if you put together a raft and set sail, you’d get to the Gulf of Mexico.”_

The Mississippi runs through Jack Kerouac’s On The Road, from where Boys And Girls In America takes its name. The Hold Steady’s albums are littered with references to authors, poets and ‘70s and ‘80s rock and punk bands. While it’s not the first time Kerouac has been mentioned by The Hold Steady (see the b-side ‘Hot Fries’), the album’s title is probably Finn’s most explicit genuflection yet.

“It’s kind of the message of the record. Whatever you study, physics or politics or whatever, the more you get into it the smarter you get. With love, you don’t know anymore at 35 than you did at 17.”_

DiS wonders how much of On The Road’s America remains over fifty years after the book ends. “When you’re touring now you just see Home Depots, Petsmarts and Targets wherever you are. My main references come from the fact that I want to make my hometown proud. That’s why I make sure to mention Lake St, City Centre, Payne Ave and so on.” A mention of Payne Ave brings back memories for the band’s tour manager Andy, who recalls it as the home of a “notorious strip bar”.

Some lyrics are lost outside of the US, a German radio interviewer recently misquoted ‘Stuck Between Stations’’s line “Tired of all the dehydrations” as “Tired of all the Jihad nations”. Craig laughs: “She thought we were making some political statement.”

_ “Political songs aren’t our jam,”_ insists bassist Polivka. Would The Hold Steady ever write a political song? Kubler thinks not: “We’re five individuals and we have our own political views. I think for a band to try to condense them into one view is… irresponsible.”

In an indie-rock market dominated by trendy British kids fresh from sitting their GCSEs, one might be reasonably surprised to see five 30-something American guys plastered all over ‘Hot New Bands’ lists.

_ “You realise as time goes on,”_ Galen tells us, “that your options are becoming less and less and for us it was either go work in an office or do this.” He gives a look that says this decision was an easy one to make. Spending time with the band you quickly realise that each member is delighted to be doing this and grateful that they found four other guys to do it with.

The Hold Steady’s sound has expanded with each album and Boys and Girls flaunts a formidable range not as evident on its predecessors. Indeed, it is their first album recorded as a proper five-piece.

“Separation Sunday, we recorded that with just Tad, Galen, Bobby and I,” _says Finn, _“And Franz’s parts were then placed on top. This time we all went in together and worked it out as a group.”

Tad elaborates:_ “There’s a comfort now in how each of us play, Bobby was new, too, for SS. I guess we just wanted to see [on BAGIA] what we were capable of as a band.”_

Does the success of this tour mean British fans will be seeing more of The Hold Steady?

_ “You’ll see us again in the spring, that’s a safe bet. Now that we’re doing more over here, I’m trying to find a soccer team to support to help pass time between soundchecks and shows.”_

After an unsuccessful few minutes of DiS trying to sell Liverpool, Finn looks up: “Hey, if you’re feeling the same way about baseball, might I recommend the Minnesota Twins?”

For now, you can catch the band as their current tour winds up with the following gigs:

Boys and Girls In America is available now on Vagrant; the album’s second single_ ‘Stuck Between Stations’_ will be released “probably in March”. Check out The Hold Steady’s website HERE.