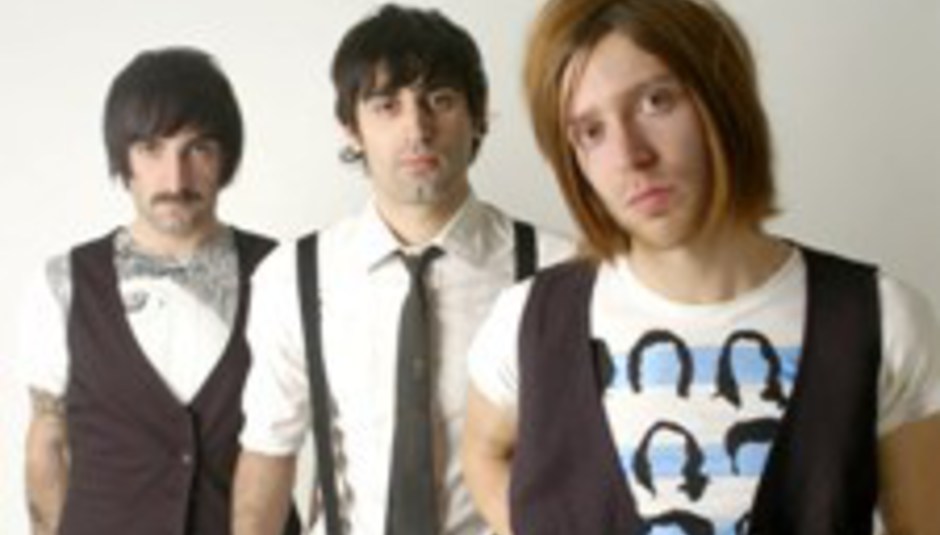 Hot Gossip are an Italian trio whose angular – are we still allowed to use that adjective in relation to guitar music? – post-punk, replete with dance-friendly beats aplenty, has had the DiS office shaking some lately; their debut album, Angles, is absolutely out later this month through the Ghosts Records label. Here is a review, no less!

The band – that’s Giulio Calvino (vocals, guitar, center), Nicola Zenone (bass, right) and Luca Fontaneto (drums, left) – have a handful of excellent gigs lined up for 2007: this weekend they play the Eurosonic Festival (DiS will be there!) alongside the likes of The Je Nais Quoi and Feverdream, and hopefully UK dates aren’t so far away. They’ve already visited, in 2006, and it was good. In the meantime, check out the album – it’s sure to appeal to fans of The Blood Brothers, Be Your Own PET, Brainiac and The Beautiful Newborn Children. And maybe a few bands that don’t begin with ‘b’.

DiS fired a selection of Some Questions over to Italy in the hope of receiving a smattering of responses. Lo! Responses, from Luca Fontaneto...

If you could be drowned in anything, what would it be?
Well, one of my worst nightmares is drowning in the sea, so I could not even think of me being drowned in anything. But, to be honest, most of the time my house is drowned in sound, eheh, so I guess that proves the masochistic inclination of human kind in some ways. Everyone has some vices that they like to drown in.

What are your favourite websites?
I’m all about the almighty net. Thanks to it I can crack tons of extremely expensive music software that normally I couldn’t afford (DiS in no way condones this behaviour). I have a girlfriend and she works for Vice magazine, so all the stuff I see in on the net comes from tips she gives me constantly. I see enormous amounts of photo shoot sites, photographer sites, designers’ sites, disgustingly flickr.com sites and paper dolls sites and… oh man… you couldn’t believe how much stuff these eyes had to see. More than they probably needed. I do have a fixation for everything regarding This Heat and their recording techniques, so I use my time to check stuff out about them. I’m also starting to read articles and chronicles about the origins of house music and its fucking primitive energy. We tend to think house music is a sorta ‘white music’, but its blackness is strong down its roots! Ace!! I don’t have favourite sites or anything like that, though. I’m afraid of organized religion and I apply that to everything, so I wouldn’t feel fine having a favourite site. But probably I’m too cynical, I know.

Do you believe in a god? If so, which one and why?
I was born and raised Catholic, under pressure from the mother of my father who was a Russian woman who took the path of God while moving to Argentina and giving to birth my father. Add to that that I’m half Jewish and you can breathe the atmosphere of my childhood. Then, growing up, I started to think about it and now, even if my parents still consider themselves Catholics, I don’t believe in God or in any other religion, let alone organized religion. That scares me to death. I don’t know if this is the right place to say things like that, or if people reading this will care, but I think that if everyone could have the strength to face reality and see things for what they really are, most of the population would be non-believers. I do understand why people have the need to believe in something, though. As for me, I pretend to believe in rock ‘n’ roll.

Have you hade any near-death experiences?
Well, I have had many deaths in my family, and in that sense we are not a very lucky family. I guess you can consider those as near-death experiences. Every time you lose someone you love it’s like dying a little bit. But once, when I was like seven-years-old, I was on a mountain trip with my father because he likes to ski. So we were on one of those things where you can sit on and be dropped off right on the top of the mountain. While we were half (way up) a big snow storm started and I saw people frightened to death, jumping off this thing and falling in the fresh snow five meters below us. I couldn’t believe my eyes. I had semi icing to my ear, and that’s the nearest-to-death experience of my life. Now it’s been like 12 years since the last time I went on a mountain.

Who would play you in a film about your life?
The guy who did The Italian Job and American History X would play me. Fuck, I have a problem with remembering names and stuff… It’s like Bob Norton, right? (Ed Norton – was he in The Italian Job? – film ed) I really love the characters he plays in his movies. Giulio would be played by Vincent Gallo, with heavy black dyed hair and skinny jeans. Just think how sexy that would be!

What’s your favourite country and why?
My favourite country would be somewhere up in the north of Europe, or the United States if they would not be so fucked up. I feel that I would be more inclined to live in Europe anyway. I love to live in a good mix of old and new. I dunno if I could live in USA for a long time. For the moment I chose to stay here though, ‘cause I have to do a couple more things yet, and witness the birth of an Italian Williamsburg in Milan.

Who is your favourite non-musical celebrity and why?
Terry Richardson because I used to date him and because he is a fucking rock star.

How do the band members stay friends when spending so much time together?
Have you ever heard this? “Enemies are your best friends.” That’s how it is. Plus we are old and we had so many bands before this one that we are used to band dynamics. We try not to step on each other’s sneakers. And playing, touring and being in a band... that’s something that we really love to do at the moment and we focus on that. Friendship is something that comes along naturally: if it has to happen, it happens, it clicks. If not, you kill your best enemy.

What band do you wish Hot Gossip were as good as?
I tell you a new one and an oldie but goldie: The Presets for their sexiness and This Heat for the irony they put in their wonderful works.

What advice would you give someone coming to a Hot Gossip gig?
Get your name on the list so you pay less, and bring diapers with you!

Are you a vegetarian? If so, what are your reasons?
I had been vegetarian for something like 11 years and I did it for the animals. I think that’s the only good reason to become vegetarian, or vegan or whatever. Two weeks ago we were on tour and in Berlin I stopped being vegetarian ‘cause I felt like I wasn’t coherent with my choices anymore. I had the first sushi of my life a week ago and it tasted good.

Do you eat fast food, and if so what’s your favourite?
I don’t eat at fast foods. I love cooking even if I’m not the greatest of the chefs. There is this place though, called California Bakery, where me and my friends go often to have brunch on Sunday mornings. But I go mostly for the place; the food is super okay though.

What’s your fondest childhood memory?
My father and my mother used to take photos of everything when I was younger. So I had this closet full of old Polaroids and pictures of me and my brothers all together in our old house. Now that I think of it, the favourite memories all come from that house, so that old house has to be my favourite one. I’m developing a taste for auto analysis, but I don’t know if I really want to go through it.

What was your worst haircut?
I used to have a little mohawk and I practically lost a good job for that. Nothing terribly punk, but it was so nice, you know.

Luca recommends that DiS readers DiScover Fog In The Shell, Young Lovers and Neon Plastix; he also suggests you try to get yourself along to South by Southwest in Texas and Eurosonic in Holland, “the first ‘cause it’s sick, the second to see us play”.

Angles is officially released in the UK on January 29, although it’s available online now; the band’s MySpace can be found HERE. Be their friend!