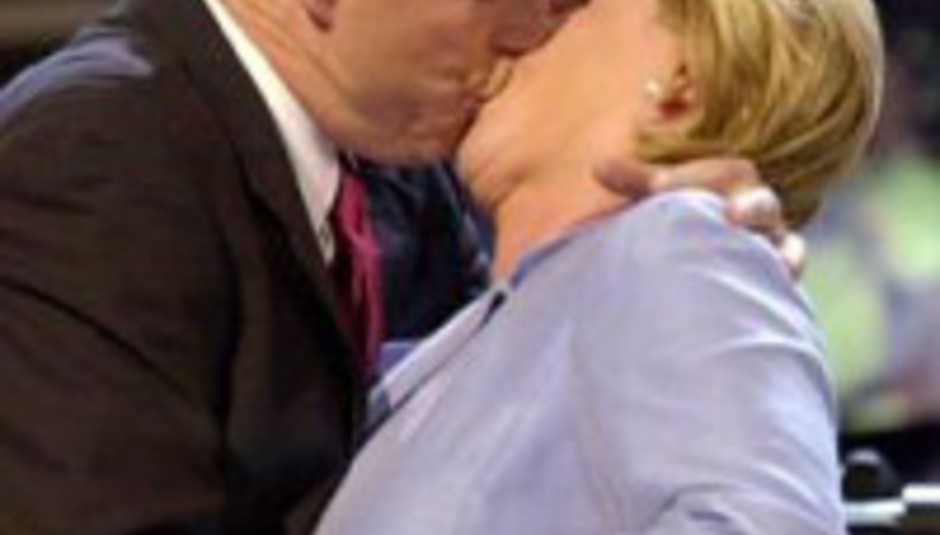 As promised, here’s part two of DiS’s Tips for 2007. Each and every one of the acts mentioned below have been getting the powers that be at the DiSopolis particularly excited of late, and we’re predicting bigger and better things for them over the next twelve months. Might they touch you? They just might…

As with part one – click here to check it out – some of these acts will already be familiar to anyone with their ear even slightly to the (under)ground, but many will be refreshingly unheard of. Or, at least, unheard, which is sort of the point here: perhaps you’ve seen the name around, but now you can click your way through to a site where said act’s wares can be sampled. Are we nice to you or what?

We're firmly behind this Brighton five-piece and their jagged indie-rock in 2007. We first enjoyed them back at In The City in 2005 when things looked bright, but few could have predicted their continued rise in the public eye. With an NME tour that won them friends and fans, a slew of blinding singles and arsenal of more behind them, The Maccabees - replete with their personal, introspective lyricism and a penchant for tight-as-you-like guitar music - soundtracked the second half of the DiS office's 2006. We're confident that when the world at large hears their spectacular debut album, they'll fall in love too. *CR* At the start of 2006, DiS played the host with the most at a sell-out (and then some) event at Camden's Barfly. We were showcasing some of the acts likely to see their stars rise that year, and appearing alongside The Maccabees and Jeniferever was this solo artist, Jamie T. Finally, the Wimbledon musician’s debut album, Panic Prevention, is upon us. It’s released at the end of this month, and is everything we hoped it would be: filled with life, playfulness and intensity, and scarred by the mark of a great, widely-varying talent. Jamie is here for the long-term and we're behind him every step of the way, just as we have been for the last twelve months. *CR*

For fans of: The Streets, Beck, Lily Allen Fields are part London, part Birmingham and part Reykjavik. That taken into account it must also be noted that they are all parts magnificent. As 2005 became 2006, their almost-eponymous debut single 'Song for the Fields' was just the beginning - and we loved that long time. From Icelandic member Thorunn's piercing keys and vocals, to the ear-rupturing dynamic shifts, Fields move above and beyond the standard indie set and mix in influences wide and diverse. Their signing to Atlantic was a smart move that will see them pushed through the right squares and into the right ears. You won't need to keep your eyes open for Fields in 2007 - they'll already be in front of them. *CR* Tipping Klaxons puts us in the same boat as every other music publication in the country, but their position as pop's brightest hopes for 2007 is as good as sealed before they've released an album, it seems. However, rather than jumping on where others have been before, we've taken a step back and sucked in this band as much as we can. The result is, as we hoped, the same as it was beforehand: Klaxons produce fun, danceable pop and, if you can get over yourself and the indie-o-meter on your head, you might just enjoy them as much as they seem to enjoy themselves. That album, Myths Of The Near Future, is out on January 29. *CR* Continuing to build her passionate underground fanbase and winning hearts everywhere she goes, Emmy The Great's blend of cutting, succinct lyricism and delicate guitar tones builds a fire in your heart and spreads a wry grin across your face. Her new single - slated for March - follows a main support tour with Scott Matthews, playing to her biggest audiences so far. Arranged by Fyfe Dangerfield (Guillemots) after their Christmas duet at Bush Hall at the tail end of last year, the single's sure to demonstrate Emmy's true potential, and we're more than a little excited. Even fashion bible_ Vogue _selected the lady as their singer/songwriter tip for 2007, and who are we to argue with them? *CR* A little over six months ago, a post hit the DiS music boards about a great, but next to unheard of, local band. So far, so what. But this time it was different. A Broken Social Scene support slot, a DiScover show in Camden and a record deal (with the ever-wonderful Wichita) later and here we are: Cardiff's best new band. Following in the footsteps of Pavement and Arcade Fire, and towing a healthy sense of humour and style, Los Campesinos! are a joy and a pleasurable challenge. Interestingly (?), it’s easy to accidentally write their name as Los Campesonions. *CR* Crystal Castles seemed to waltz in a startlingly carefree gait into the hearts and minds of the many in 2006. Their first release was a demo on which the title track, ‘Alice Practice’, was indeed just a vocal practice that came out so well they decided to keep it (review). Delicious retro beeps belied a fierce, danceably dark, shrill and penetrating electronic-punk sound, and before you knew it they were blowing away established club nights like Motherfucker on a whistle-stop UK tour, remixing Klaxons and playing Vice's country house festival. If you want to hear how good they're about to get, have a listen to their second single ‘Insecticon’ on their secondary MySpace. *JB* Fragile, joyous and energetic are three adjectives certain to feature in an appraisal of this band-cum-solo artist. 2006 saw the release of Loney, Dear's UK debut album through Something in Construction; Sologne garnered a healthy amount of respect and acclaim upon its October release (review). In 2007, freshly signed to Sub Pop in the US and a major over this side of the pond, Emil Svanängen and his group are ready to convert that acclaim into wave after wave of fans. The new album Loney, Noir surpasses the majesty of Sologne and is certain to open new doors for the band and their Swedish songsmithery. The band will play for free, for DiS, on January 13 at London’s Notting Hill Arts Club (full details). *CR* Recently signed up by Bella Union, Texan troubadour Robert Gomez looks certain to send further success the way of the London label, following standout 2006 albums from Midlake and Howling Bells. Echoing the work of both Sparklehorse and Eels, Gomez’s music is immediate yet possesses the sort of haunting qualities that keep the listener coming back for more. A record full of tenderness and throbbing fuzz-rock, Gomez’s Brand New Towns debut has already received a great review on these pages (click), and 2007 is sure to see his profile grow and grow. The year’s most inspirational heartbreaker? Could be, could be… *MD* Regularly praised by DiS critics and messageboarders alike, Leeds’ iLiKETRAiNS craft the sort of ethereal_ post-post-rock that the average astronaut hears in their mind’s ear while staring down at Earth from an orbiting space station. Newly signed up to Beggars Banquet, the quintet look certain to build upon their already sizeable profile in 2007; a new single, _‘Spencer Perceval’, is scheduled for a March release, and an album and film (!) are likely to follow at some juncture in the next twelve months. If their first album proper is as well received as their 2006 mini-album for Fierce Panda, Progress Reform (review), expect the band to be gracing grand stages previously reserved for the Sigur Rós types of this world come the year’s end. *MD*

For fans of: Explosions In The Sky, Joy Division, TV On The Radio DiS was lucky enough to be whisked to Montréal this year, for the inaugural M for Montréal event. An overriding highlight of this trek was the live experience that was* The Besnard Lakes. Try to imagine the most beautiful avalanche you can, filling a room with glorious noise and soaring vocal melodies. Add to that the intensity of a My Bloody Valentine live experience and the kind of anxious energy that surrounds a funeral and you've got an idea of what The Besnard Lakes are all about. Their album _The Besnard Lakes Are The Dark Horse_ drops via Jagjaguwar in February. We highly recommend it. *CR

For fans of:** My Bloody Valentine, Serena Maneesh, Spiritualised_ A great signal of being a revered songwriter now appears to be the Christian name 'Patrick' and, joyously, Watson is no exception. Having wowed crowds with his performances at Iceland Airwaves last year and securing the support of NME along the way, the Montréal boy is ready to take on the world. Buoying between Jeff Buckley fragility and a Gruff Rhys pop sensibility, Watson has all the components needed to dominate your heart and mind in 2007. With a performance at The Great Escape Festival in Brighton coming this May, you'd be stupid not to let him in. *CR* Ignore those intent on proclaiming them to be 'the new Maroon 5' and nothing more: Cold War Kids eclipse their pop-rock peers, with vocals to die for, melodies that throw a heart into disarray and choruses that render any personal attempts at songwriting completely pointless. Are we overdoing this? Well that's for you to decide, but put it this way: DiS’s editor was heard uttering that they were "the best band I've seen for the first time in 2006. They blew my head off". Which is, basically, quite high praise. If you're yet to investigate the musical powerhouse that is Cold War Kids, get hold of their current EP (review) as soon as possible, or await the glorious debut album, Robbers & Cowards, via V2, two months into the new year. *CR* Now that the Yorkshire mania has receded somewhat, and wave after wave of ¡Forward, Russia! copyists, Long Blondes-lites and Faketic Monkeys have been and gone, the cream is left on the top (notably those three bands) and we're finally able to take the area seriously again. Step to Sky Larkin: three pretty kids with many pretty songs. Think of them as a glorious mixture of stupendous pop melodies, pleasing-to-the-eye personnel and a host of quirks to boot. The band's debut single drops on Dance to the Radio later this month; expect the explosion to begin shortly after. *CR*

Okay, DiS public: any glaring omissions across our twin-episode tips for '07 feature? Many of the next year's might-bes have already been DiScovered in '06 - check out our DiScover Section for features on many an up-and-coming new band, as well as early interviews with Howling Bells and Bat For Lashes, two acts that won over critics in 2006. Ready, steady... DiScuss.