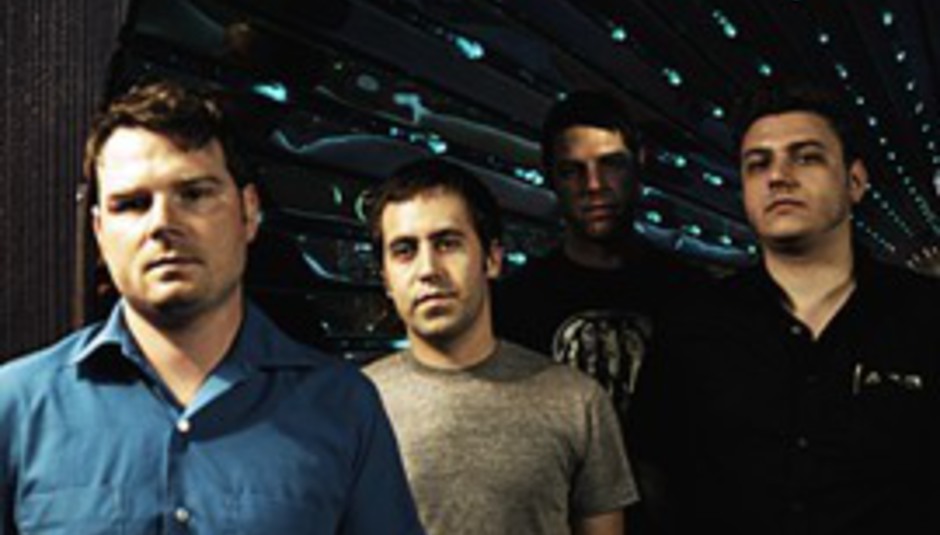 Nebraska-spawned rock quartet Ladyfinger (ne) are sure to get Saddle Creek’s 2007 off to a blistering start. Their Matt Bayles-produced debut album Heavy Hands is due out through the label – not so synonymous with all things emo these days – at the end of January.

Anyone attending a Bronx show earlier this year – in October to be precise – might already be aware of the four-piece, known to friends and family as Jamie Massey, Chris Machmuller, Pat Oakes and Ethan Jones. Ladyfinger (ne) opened each of the tour’s three-band bills, serving as a slice of bread in a Winnebago Deal sandwich. The band list their influences, on their MySpace page, as “bluez, booze and BBQz”. This, we like.

DiS sent off Some Questions and was pleased to receive replies from not one but two members of the band. Unprecedented? We forget.

If you could be drowned in anything, what would it be?
Chris (guitar/vocals): The sea of love
Ethan (bass/vocals): Air... is that possible? Drowning isn't a way I'd like to go out, it sounds like the worst way to die.

Apple Mac or PC? And why?
Chris: PC. Because mine was free.
Ethan: Mac for sure. It's what I learned on and everything seems to make sense. I get on a PC and it takes me forever to figure out where anything is. Plus, it seems to me that Macintosh is always a bit ahead of the PC world when it comes to newer technology. Look at iPods, iTunes, iMovie, etc. That stuff is all available for PC now too, but Mac did it first.

Do you believe in a God? Which one and why?
Chris: Hall and Oates.
Ethan: I like Conan the Barbarian's god, ‘Crom’.

What band do you wish your band were as good as?
Chris: Hall and Oates
Ethan: Not sure how to answer this one. Maybe Weird Al?

Have you had any near-death experiences?
Chris: We have hammer fights all the time.
Ethan: Yes, I fell off of a bridge when I was 14 from at least 20 feet up. I broke my back in three places but I'm lucky... could've landed on my head.

You spend so much time together, how do you stay friends?
Chris: We have a healthy sexual relationship.
Ethan: We've known each other long enough to realize when one of us needs some room to breathe. Travelling with anyone for a long amount of time can be taxing. You just need to know what to expect going into it.

What's your favourite booze and why?
Chris: Rumpleminze. Just shoot a couple sometime. Trust me.
Ethan: Beer. In the States I prefer Old Style brand beer. It tastes amazing and is very cheap. Really, it's almost too good to be true.

What are your favourite drugs and why?
Chris: Most. Well, maybe half.
Ethan: Marijuana goes well with Old Style beer. I've never liked hard drugs enough to stick with them. Pot is relaxing and makes music better (at least I keep telling myself that). It also makes me kinda dumb, which is fun sometimes.

What's your favourite childhood memory?
Chris: Hangin' out at Mel's diner with Richie, Potsie, Ralph and Fonzie.
Ethan: My family had a creek/stream in our backyard when I was a kid. My younger brother and I practically lived there building forts and having a blast just being kids.

What was your worst haircut?
Chris: Buzz cut. Summer time, mid-Eighties.
Ethan: Probably the haircut I have now.

What part of your body is your least favourite and why?
Chris: My fists. Because they evoke so much terror.
Ethan: Right now my beer belly, but I'm gonna work on that soon.

What's festival do you recommend that everyone should go to and why?
Chris: I don't know. I can't afford any of them, even if they're shitty. Although there are a lot of cheap Bluegrass festivals here during the summer.
Ethan: I haven't been to a festival since Lollapalooza in 1994 or ‘95 when Sonic Youth played. Maybe I'm not the best person to recommend festivals that people should go see. Maybe someone should recommend some festivals for me to check out.

Between them, Chris and Ethan recommend you DiScover Mountain High, STNNNG, Mal Madrigal and Ideal Cleaners. And maybe you should: fear those fists.

Heavy Hands is released in the UK on January 29, via Saddle Creek; for more things Ladyfinger (ne), check out their MySpace page here.