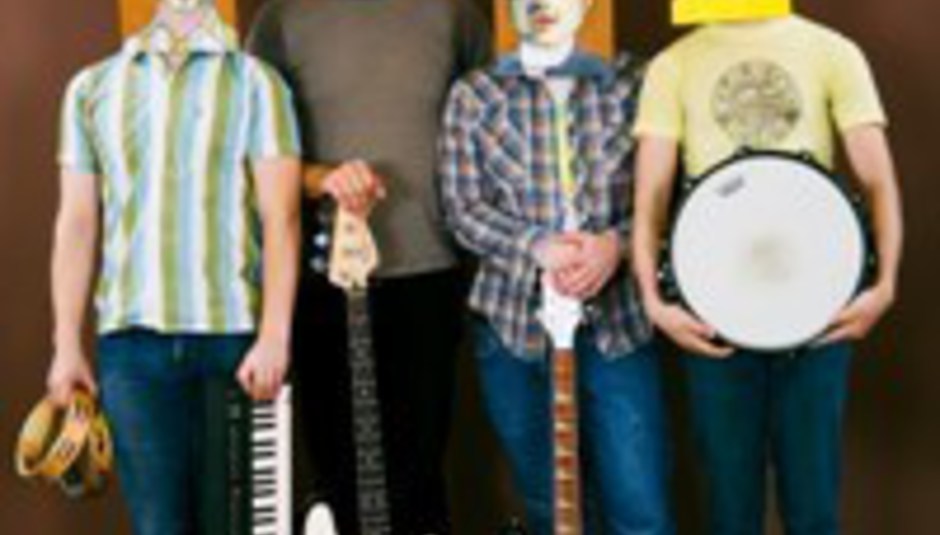 Thunderbirds Are Now! have been getting DiS’s toes all twitchy since the release of their 2005 album, Justamustache. Our introduction to the Detroit quartet - Matt Rickle, drums; Ryan Allen, guitar/vocals; Julian Wettlin, bass; and Scott Allen, keyboards/percussion/vocals – was actually their second album, following 2003’s self-released Doctor, Lawyer, Indian Chief. Before that, the group released a self-titled EP.

Now on album three, Make History, TAN! are gearing up to take the dance-punk crowd by storm. Signed to Frenchkiss – the label run by Les Savy Fav’s Syd Butler – the group will appeal effortlessly to fans of the ‘Fav as well as aficionados of everything new-wave. ‘Neo-post-punk’ is what they’ve been called in some quarters, but we’re not so stuffy: it’s just good music to dance to, innit?

DiS fired a list of questions the way of singer Ryan, and he kindly answered them. Hooray? Yes! It’s another Some Questions…

If you could be drowned in anything, what would it be?
Piles and piles of dirty money.

What are your favourite websites?
Um, er, uh... uhhhh... DrownedinSound.com?

Apple Mac or PC? And why?
Macintosh, because our bassist Julian works at the Mac store and he said he'd get fired if we answered PC. Alternate answer: Commodore 64, solely based off the merits of its Street Soccer and Incredible Hulk video games.

If you could make one already-written book as important and integral to Western society as the Bible, what would it be?
Star Struck: A Novel by Pamela Anderson. Sample line: "Why do my nipples hurt?"

Have you had any near-death experiences?
There was one time a friend of mine and I were coming back from a show in Detroit to find a queen-sized bed in the middle of the highway, which is not normal here in the States (maybe it is in Europe?). Anyway, we had to swerve to avoid it, doing a complete 180 and stopping inches from the guard wall on the highway. We sat there for a moment in silence, contemplating how we survived it, and bust out laughing at the absurdity of it all. The fucked up thing was that somebody was sleeping on the bed, got up and said, "Hey dude, you woke me up". That’s not true.

Who would play you in a film based upon your illustrious life?
People always say I resemble either Elton John or Phillip Seymour Hoffman. Thus, I would like their love-child to play me in a film.

What is your favourite country and why?
I think Canada and Australia has shit pretty figured out.

What has been your most notable experience with fans and admirers?
Once I drank a bottle of Gatorade, finished it, and was about to throw it in the trash when a girl stopped me and said, "Hey, can I have that Gatorade bottle?" I have no idea what she did with it after that.

You spend so much time together, how do you stay friends?
Cuddle.

What band do you wish your band were as good as?
My Morning Jacket.

What advice would you give someone coming to one of your gigs?
Yelling out songs from our first album is not going to get you anywhere.

What's your favourite booze and why?
The kind they give us to drink for free at shows.

What is your favourite fast food and why?
During the day: Arby's; at 3 am: Taco Bell.

Who or what do you miss the most?
A democratic government, sleepovers, Boyz II Men.

What was your worst haircut?
I used to play basketball when I was younger, and in the '80s there was a trend where it was really cool to shave your jersey number in the back of your head... my number was 11. Anyway, I have red hair, and when you shave something in your head, when your scalp is basically pale white, the number doesn't really show up too well. So my mom decided the way to solve the problem was to take eyeliner and draw in the number 11 I had shaved on my head. Now that I think about it, though, this could have been my best haircut ever.

What part of your body is your least favourite?
My saggy tits.

Ryan reckons you should find time to visit Disneyland at least once - "Goofy goes off, yo!" - and that you should DiScover Malajube, Meneguar and Snowden. Luckily for you, we've already DiScovered Snowden - click here.

Keep up to date with all Thunderbirds Are Now! things by making friends with them on MySpace. As you can see, they're playing a few UK shows in February; dates as follows: