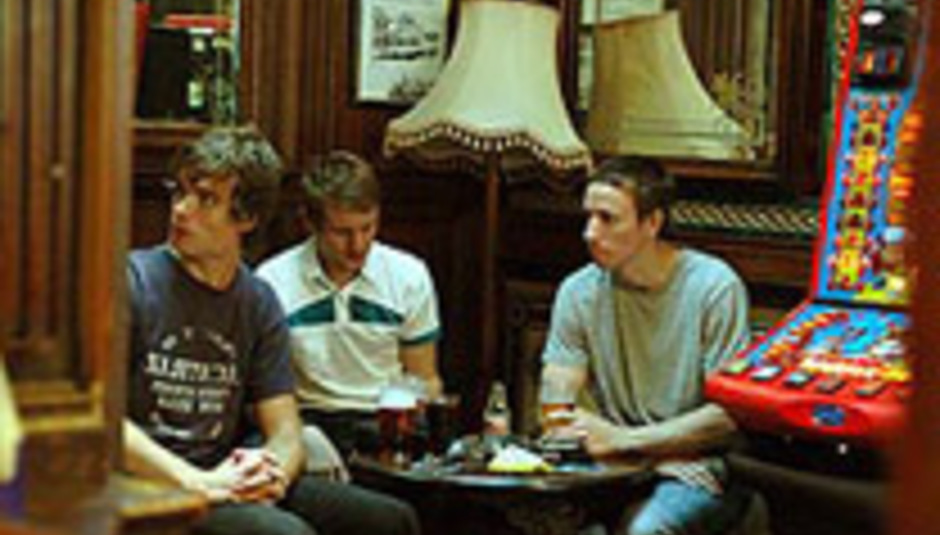 We’ve always known there’s something a bit funny going on ‘Up North’, but recently Sheffield has come into its own. First they famously spaffed out those internet-orchestrated indie-rockers Arctic Monkeys, who went on to sell billions or something. After that we received the more-melodic Milburn, who are expected to also sell billions or else find themselves on the Second Album Scrapheap. Now... now we’ve got the totally unpunctuated Bromheads Jacket.

The Yorkshire trio - Tim Hampton (guitar, vocals), Jono West (bass) and Dan Potter (drums) - do the Sheffield Shuffle and sing about real stuff to funky rhythms and bittersweet melodies. Mike Skinner from The Streets is a big fan. Mike Skinner also likes Deftones. How diverse is he?! For some reason, BJ (or one of them, at least) agreed to answer Some Questions. I think they are mad.

Apple Mac or PC?
Mac. Because Bill Gates is a cunt. If a PC could exist without him I would say PC. I wont ever buy a Mac, though, ‘cause I don’t buy things just ‘cause of the way they look.

Have you had any near-death experiences?
Yep, several. Mostly involving bikes vs cars, or bike vs hill, or jump and losing both.

If you could be drowned in anything, what would it be?
Probably Guinness, or maybe Jon Bonham’s sweat. I’ve never tasted it, but I reckon it’d be a good way to go.

What's your favourite booze?
As above. 'Cause anything black is great.

What are your favourite drugs?
Alcohol and Nurofen. We’re anti anything much harder than that.

Are you a vegetarian?
I would eat meat more if it was meat, but I can’t afford real meat that’s been created humanly, if you know what I mean. I eat seafood and occasionally a burger, just because they are my greatest weakness.

Do you believe in a God?
It’s the young man from Nazareth for me. Originally because I was taught that he had long hair, a beard, and no job and rocked about in sandals all day. Although I know his physical appearance was nothing like what I was taught, I still like the idea of a surfer god that turns water into wine. I suppose if you want to get heavy it’s ‘cause apparently he’s the only one who forgives you if you fuck up. I like the idea of Buddha, but I fuck up too often and I don’t want to go to hell if at all possible.

What has been your most notable experience with fans and admirers?
A guy asking me to write “FUCK THE QUEEN” on his t-shirt. I told him I had, but he didn’t believe me.

What was your worst haircut?
I haven’t had a bad one, ever.

Who would play you in a film based upon your illustrious life?
Jack Nicholson, ‘cause I wish I was him.

Who is your favourite non-musical celebrity?
Michael Moore, because he is one of the most punk non-musicians I think I know of.

Name three things you could not live without.
Music, love, creativity.

The 'Jacket' itself is about Dan the drummer’s hamster, whose fur fell out so they made it a jacket. I’m assuming the hamster was called Bromhead. Yesterday I was talking to a man with blonde hair in his office when he exclaimed: “Last night… I think my hamster came on my hand.” Oh how we laughed.

Bromheads Jacket recommend you go to South By Southwest festival in TeeHaw, Texas, US of A. That’s happening next March and you can bet your sweaty, crab-infested crotch that Mike Diver wants to go to it. If there’s any justice, he will go there and drink lager and see loads of wicked bands. The band also likes some other bands, and thinks you ought to DiScover Oxfam Glamour Models, Wretched Replica and Polinates. What do YOU think?