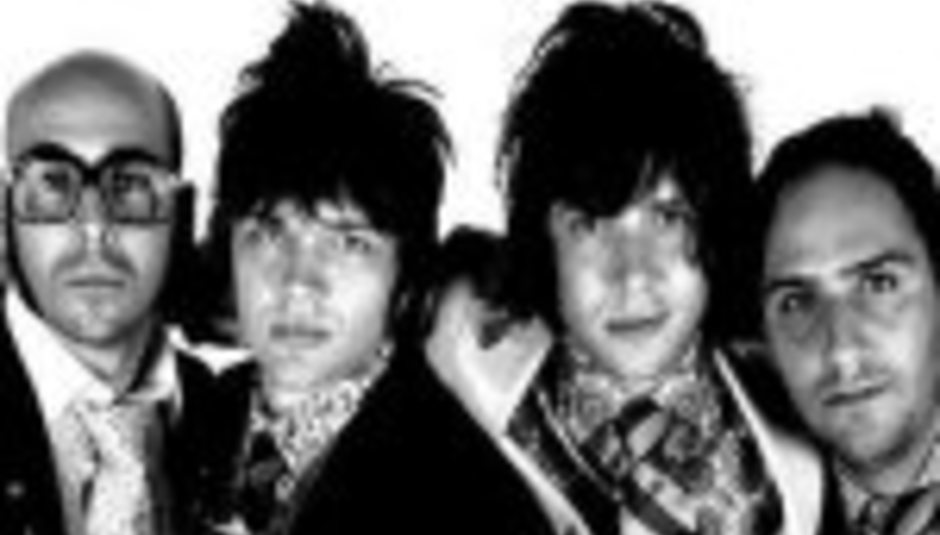 Damian Kulash (front man, main songwriter, guitarist, singer, sometimes producer, often street teamer and general odd job man with OK Go) has just finished cutting up a brand new white double duvet cover from M&S to use as a projector screen for “a bunch of wallpaper patterns: we're obsessed with clashing patterns right now”, and now we're across the road in a quiet little bar with three quarters of an hour before the band are due to open for Brendan Benson at the Edinburgh Liquid Rooms.

“I don't know what time it is. Or what the hell is going on. We got in yesterday after three plane flights and I was at a wedding the night before and was really wasted, so you'd think that would have made me able to sleep on the plane but for some reason I just couldn't sleep on the plane, so when I got here at noon yesterday I crashed out and I think I slept eighteen straight hours or something.”

You might expect that Damian ought to be a little tired from all the chaos, and from the hour-long soundcheck him and his band have just completed. But if he's feeling a bit sleepy he's doing a good job of not showing it, even before he's finished his espresso.

Perhaps unsurprisingly, Kulash shares the same quirky kookiness that is so apparent in OK Go's music and lyrics. The Semiotics graduate also has a penchant for making up words, like “balladiful”, “superdifficult” and “soppy-pants”, not to mention using plenty of words we don't believe are real but the consultation of a dictionary reveals they do actually exist. He oozes intelligence, gets enthusiastic about everything, and he talks like it's going out of fashion.

Their new record, 'Oh No' hit shops in America at the end of August, and will finally see its UK release in January. Produced by Tore Johansson (who did the first Franz Ferdinand album) and recorded in Sweden, they've not lost their unique and often child-like charm but they've stepped things up a gear and made a meatier and more mature sounding album.

“We recorded the whole thing in Malmo. We wanted a producer who would help us focus the sound more. Our last record was such a sort of overproduced pop collage. We had a lot of control over it but we were just like kids in a candy store, you know, “let's try this!” and “let's try that!”, and I think we just overindulged ourselves. We wanted the second record to be much more focussed and much more succinct and to have a more continuous tone. And the songs are still all over the place but at least it feels like one band at one time, and I think it's a much better record that way.”

Shortly after recording the new album, guitarist Andy Duncan announced his decision to leave the band. He has since been replaced by Andy Ross (“We upgraded our Andy”), who was chosen after a lengthy process of asking friends for recommendations and getting some names from headhunting companies, before auditioning a shortlist of around thirty-five people.

“I'm kicking myself that we didn't videotape it because it was so funny. We gave everybody two guitar songs and two keyboard songs to learn and this guy came in and the song called 'There's A Fire' from our first record, and he set up the keyboard through this whole array of pedals and we started playing the song and he just started playing with the effects and for three and half straight minutes it was just this wall of noise, and then at the end he looks up from the ground as if, “did I get the job?” He was hilarious. And we ended our interview by asking if they'd do a choreographed dance with us, and half of the people were just like, “Ummm... Uhhhh....” and then looking at you trying to figure out whether they should say yes or no, like it was a test.”

A video of OK Go performing a dance routine to their song 'A Million Ways' has been floating around the internet for about a month now, and has already clocked up over two million downloads. But it wasn't always intended to be that way.

“The new dance routine was just a dance routine to end our shows. That film is literally just a camera set up in my backyard, and it was just a document of our rehearsal so that we could show it to a bunch of our friends, but after we saw their reaction, we thought maybe we should give this to the fans. The head of the internet department at our label, the first thing he said when we showed the video to him was, “if this goes out first, we're sunk.” And within two months it was, by their reckoning, the most successful internet campaign that they'd ever waged. So now, of course, he loves the dance.”

So what's next for OK Go?

“We are doing a bunch of dates with Rufus Wainwright on the East coast, and then a bunch of headlining dates on the East coast and then we're doing the Mid West, then we're off for two weeks in November, we don't know about December, and we're trying to come back here for January or February. It looks like we might do something with the Kaiser Chiefs in April, but I'm not sure.”

Those lucky Americans have already had a Kaiser Chiefs and OK Go combo, so it seems only fair that us Brits should get one too. The two bands toured together Stateside earlier this year, and it sounds like a match made in heaven.

“It was fantastic. I think I can say honestly that they are the band we feel, as a bunch of people, most similar to. Kaiser Chiefs are like a weird doppelganger for us. They don't have the numbskull, bang-my-head-against-the-wall thing a lot musicians do to me. You know, they're people you can have real discussions with. We get along very well and have a really great time.”

With band mate Tim Norwind out on the road looking for Damian to come and set up, it's time to say good bye to the most charming and eloquent front man you're ever likely to encounter. Eight cracking and energetically performed songs (mixed just right, but that's what you'd expect from an hour-long soundcheck) and a dance routine follow - the latter of which brings the house down and just about causes a stampede at the OK Go section of the merch stand.

After the show, Damian, Tim, Andy and Dan are out and about with notepads gathering email addresses. Yes, boys and girls, OK Go are their very own street team, and they're so adorably sweet with it that many a girl could be forgiven for trying to wrap them up in a jumper like a little lost kitten and take them home for milk and cookies.