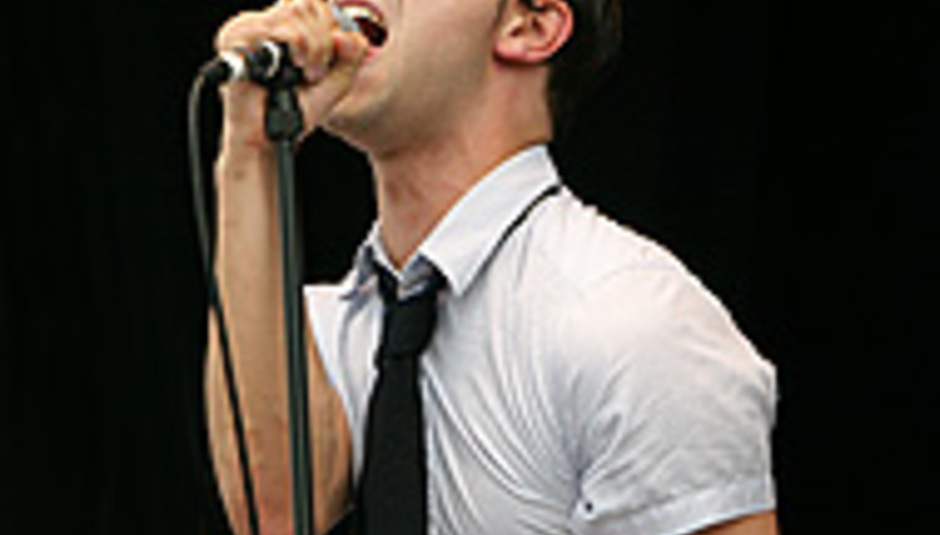 by Colin Roberts August 22nd, 2005
So, you've looked out of the window this afternoon and seen the doom and gloom pouring from the sky and decided that the office isn't actually that bad after all... Well, how about we remind the lucky ticketholders what's to come this weekend by giving you a selection of hot new bands to check out and some old faves for the Carling Weekend: Reading & Leeds festivals.

Death from Above 1979
Bringing the almost-camp, two-man disco noise, DFA1979 are an act to be savioured, whatever your mood/state of drunkness. Hopefully they'll play their ace cover of Bloc Party's 'Luno' to make everything lovely as well. Saul Williams
Saul has been arguably one of Drowned in Sound's artists of the year, with a healthy dosage of articles across the board. For those who have not witnessed Williams before are in for a heady mix of intricate lyricism, perfect beats and outspoken social commentary. A rare gem.

The National
'Abel', The National's flagship tune is fast becoming a staple in indie discos across the land and the accompanying LP 'Alligator' is a highlight of this year's releases. Check out the layered guitar sounds and joyful rhythmic delights at Reading/Leeds this year.

Two Gallants
Having just signed to Saddle Creek, the alt-country-blues magnificence delivered by Two Gallants is waiting to be discovered and enjoyed. Following their star status at this year's South by Southwest festival in Austin, Texas, this is one of your first proper chances to catch the band in the UK.

Test Icicles
One of the most animated, exciting and almost shambolic (in the nicest way possible) acts around, Test Icicles play to insane backing tracks whilst flailing stylishly and generally being cool. It's hard not to like the trio and at a festival, it will be jokes.

The Arcade Fire
Those who have already witnessed Canada's Arcade Fire live will be fully aware what to expect. Their debut full-length 'Funeral' has been one of the truly great albums of 2005 and their on-stage performances are beyond comparison. Expect tears of joy and sadness. The Cribs
It is required of you that you do the following; 1) drink a LOT of beer, 2) get in a dancing mood and 3) go mental for The Cribs - easily the most fun you can have with your clothes on or off.

Sleater-Kinney
For a troupe so far into their collective career, it's fantastic to know that the music S-K are a making today is as vital, if not more than it ever has been. Latest record 'The Woods' is a 2005 female-rock masterpiece and their riotous shows are beyond a comparison. A must-see.

Four Tet
Kieran Hebden produced one of DiS' most-loved albums of all-time in 'Rounds', catch him and his band at Reading & Leeds as a precursor to their headline tour with Explosions in the Sky this Autumn.

Maximo Park
DiS called Maximo Park's debut 'A Certain Trigger', "a magnificent album" and 2005 has been a massive year for the band, scoring a string of Top 40 hits and shifting crate after crate of the afore-mentioned Mercury Music Prize-nominated LP. The Rakes
After seemingly endless touring and writing, The Rakes finally released debut LP 'Capture/Release' this month to critical and public acclaim. Catch their renowned live set over the weekend.

Adam Green
US-born Green has been recording songs with his four-track since he was 12, following which he went on to form epochal anti-folk masters The Moldy Peaches. Now at the still tender age of 24, his delicately delivered, masterful acoustic musings are immersive listening.

Komakino
DiS Recordings' very own Derby darlings, Komakino's debut single 'Say Something' sold out in six hours this July and the band have gone on to play to sell-out crowds across the UK. Bring your thinking hat, your dancing shoes and plenty of water/beer/Jack Daniel's to sort your throat out after singing along.

iForward, Russia!
Part of the rather splendid Leeds rock-action scene, iForward, Russia! are a danceable rock force, a brilliant cross-section of intense, defined pop. Catch them now before they surely go stellar.

Nokia Raw Zone Stage
Aspiring musicians among the festival-goers are given the chance to pick up expert music tips from established acts such as Elbow's Guy Garvey and John Hassell of Yeti. The stars will be offering tips ranging from bashing out the perfect chord to wheeler dealering your way through the music industry to budding rockers in a series of on-site master classes. There will also be karaoke at the Rock Up & Play sessions. Oh yes.
NokiaRaw.co.uk

Leeds Site Exclusives
If you're joining Team-DiS in trekking to Bramham Park for the Leeds leg of the festival, then you're in for additional, exclusive and quite frankly FUCKING DELICIOUS treats in the form of:

Exclusive Thursday night thisGIRL performance
Yep, DiS Recordings' genre-bending hyperactive genii play a show in the Cabaret tent on the Thursday night of the festival. More than an excuse to pitch your tent for that extra night. Error in Movies
Our friends at Type2error bring the multimedia love with exclusive sets from Saul Williams and Youthmovie Soundtrack Strategies as well as video showcases from Type2error (they've made videos for Bloc Party, The Rakes and more dontchaknow) and a silent movie soundtracked by the delightful YMSS boys, which will be familiar to those of you who attended their event at the ICA earlier this year. It all kicks off in the cabaret tent on Saturday night.

Lee Jeans Unsigned stage
iLiKETRAiNS, 65daysofstatic, This Et Al and more showcase the best of Northern unsigned talent on this three-day extravaganza. Pop along and check out the cream of Manchester. And Leeds, Sheffield, Liverpool and more.

Images of The Rakes; The Cribs; Maximo Park by Sonia Melot

DiScuss: Hooray! It's here! Who is popping along? We'll be at Leeds getting silly in fields. Do come and say hello! Who are your picks for this year?