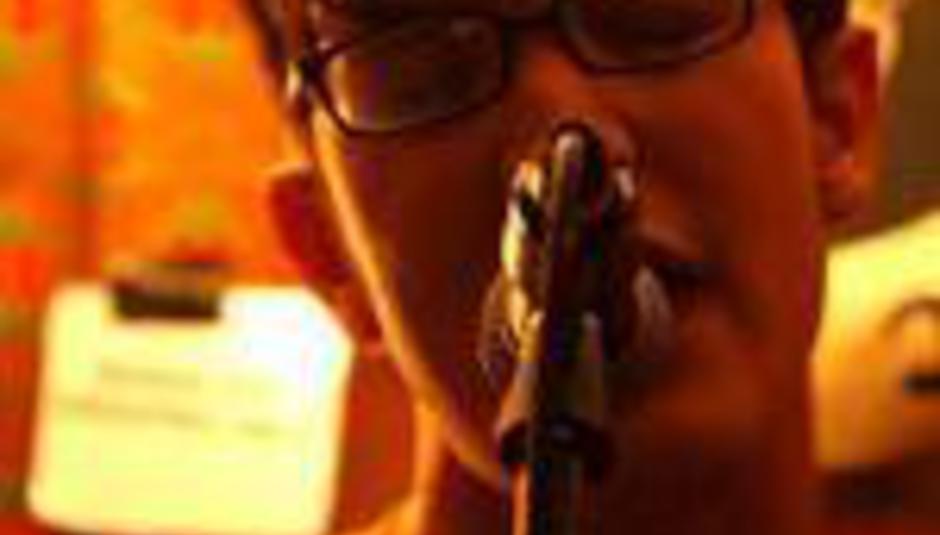 by Colin Weston August 1st, 2005
Today is the day of TMF (nothing to do with that music channel!) and we are excited here at DiS Towers . So, who are we putting on? Here is a reminder of the great acts playing the DiS acoustic stage this year:

Aylesbury bred chart botherer Martin Grech will be headlining this year’s DiS acoustic stage at the TMF festival on August 6, performing a solo set. In an early interview he described himself as 'a combination of Trent Reznor, Thom Yorke and Peter Gabriel.'. His 'Open Heart Zoo' album caused a flutter in many hearts whilst having tracks used in multi-national TV ads all at the tender age of 19. Now in his very early twenties, Martin is back and out to carry on where he left off and will no doubt leave the crowd spell bound on the day.

After hours/days/weeks of talks, counter talks and back handed sweetie bribes we have managed to rope in the irrepressible Chris TT. For those of you who don't know him (and shame on you!), he is an English singer-songwriter who is capable of Rabble-rousing sarcastic rants ('Eminem Is Gay' being one fine example) as well as more serious, darkly inventive stuff. Does he have the credentials? I would say supporting Ben Folds, British Sea Power, Divine Comedy, Elbow, Electric Soft Parade & Ed Harcourt as well as already performing at the Glasto and Truck festivals this year... that should just about cut it!

Coming from Llanelli in Wales we have managed to land Christopher Rees to perform just for you! Fresh from landing the Best Male Solo Artist mantlepiece ornament at this year's Welsh Music Awards (an award he has been nominated for in past, but lost out to some fella called Tom Jones), Chris has agreed to travel to Essex for the day to treat us all to some of his 'ambitious, profoundly passionate, bombastic and sophisticated' music which we are sure will turn more than a few heads on the day!

Manchester starlets Lisa Brown are going to infect everyone with their pop-tastic tunes. Highly rated on the Manchester music scene, these guys will appeal to fans of Doves, Godspeed You! Black Emperor, Sigur Ros and Spiritualized. With their new demo being hawked around at the moment, it would not surprise me if things were really starting to happen come the time of the festival, so keep your eyes peeled!

We also have local talent Stuart Masters. The only returning act from last year, Stuart opened the stage in 2004 and impressed all with his Ben Kweller-esque stylings. His solo material is very different from what he does in his band Lizard Called Me, but still of a very high quality.

And don't forget Sweet Billy Pilgrim. Moving quietly in the musical underworld but that could all be set to change very soon. Their split release with Spoilt Victorian Child has set a lot of tongues wagging and quite rightly too!

Just released his debut single 'I Believe in the Way You Move' and his next single is on Transgressive Records (Subways, Mystery Jets, etc..). Jeremy Warmsley is a very promising Londoner being tipped to continue to stumble into some of the same Beck-shaped foot-steps as Tom Vek. He's been building a name for himself gigging in and recently picked up lots of plays on late night Radio1 and 6music.

And finally, at stupidly late notice, we have persuaded Emmy The Great to perform just for you. Emmy writes sweet'n'wee-soured folk ditties with hints of Adam Green and the shambles of Cat Power. She's a very special and very sweet luminary in waiting who will charm you to the floor, only to flutter her eyelids and restore your faith in all that is beautiful.

Still not convinced? Have you not heard some of the bands we are putting on? Well fear not as we have a free 10 track sampler for you to download by clicking here.

So thats 15 bands in just one afternoon! Add to that the fact that Art Brut, The Others, Days of Worth, The Metro Riots, The Duke Spirit, Smother, Engerica, Electric Eel Shock, Queen Adreena, Raging Speedhorn, Septembre, Sikth and a shedload more bands are on the other stages. So how much does all this joy cost? Just £10 if you buy your ticket in advance from here.