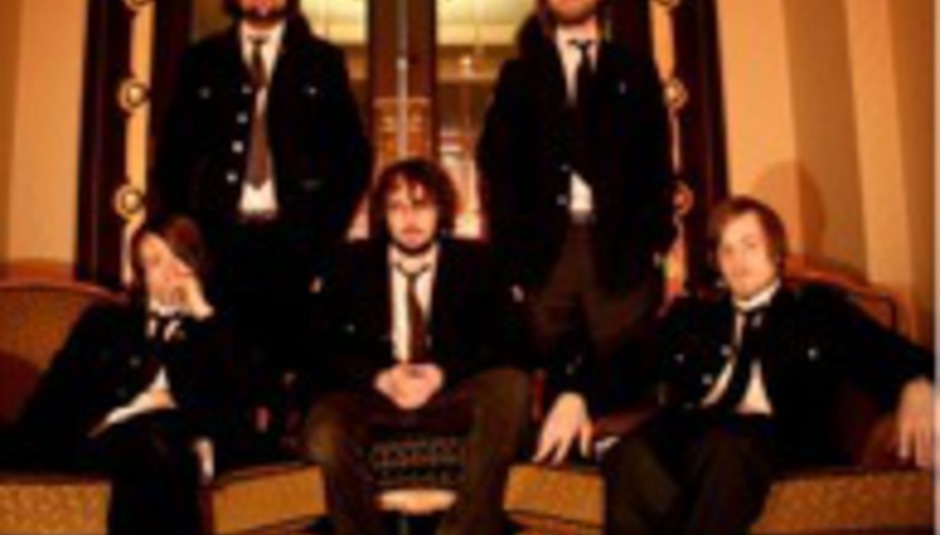 Location, location, location. Sometimes it seems that the confines of an event dictate the actual happening. Indeed, one could be forgiven for seeing the plottings of something a little sinister when viewing five men with a varying amount of facial hair huddled together, wearing a mix of hushed smiles and thousand-yard stares. Considering the panache and underlying gloom in iLiKETRAiNS' material the image could become jet-black, but in the amber-warm welcoming arms of Junktion 7, tonight hosted for the first time by the JD Set (organised jointly between Jack Daniels and Channel 4), the underlying and entirely British beauty that can be found flowing through their loc-emotive post-rock shines like the seven o’ clock sun.

And as the sun sets in the Nottinghamshire sky so does a chapter in the story of iLiKETRAiNS. The band are ready to draw a line under their old material, catalogued most comprehensively on the seven-track Progress Reform EP, and begin expanding their horizons. I ask what the future holds for the five piece - Guy Bannister (guitar and keys), Alistair Bowis (bass), Ashley Dean (images and cornet), Simon Fogal (drums), David Martin (guitar, vocals).

"We will begin recording our new album in December. With the Progress Reform EP we were kinda saying goodbye to our older songs, some of which we have been playing for a couple of years. We are starting to introduce new songs into our sets that will be on the album, although we don’t have anything close to a definite tracklist."

Which, on both sides, could turn out to be a very difficult process. New songs 'SPENCERPERCiVAL' and 'DRWiLLiAMBOYD' are perfect examples of controlled progression, the band’s unique sound streamlined and injected with a fresh sense of vigour, while in their short time together they’ve already built up a catalogue so impressive that the only ‘standout’ tracks are the ones that fall short of the mark of brilliant. 'Stainless Steel' is an eight-minute epic built on the back of their Sheffield heritage and carried by paranoid pleas of “please don’t go into the kitchen, cos that’s were the knives are”, while ’CiTiZEN’ rides on a guitar line as chilling as any Moscow night and 'A Rook House For Bobby' is as anthemic as any song about a chess master is going to get.

It is the last song on that list that has become a call-to-arms for the band, capturing David Martin’s haunting voice and epic songwriting at its best. As noted, the song's lyrics are built around the story of former American chess world champion Bobby Fischer, who is said to have dreamed about living in a house the shape of a rook piece. Other songs are formed around similar topics, and they have almost become a signature of the band, according to vocalist David.

"We’ve always tried to incorporate something a little different into our sound and I do the same with the lyrics. I don’t do it to be pretentious or obtuse - it's just easier to not write about the typical rock topics, and plus it's been done a lot less. It's quite funny actually, because now we get people coming up to us at gigs with obscure stories about architects or explorers that they feel we might want to use in a song, but I'm all for it."

Perhaps inevitably it is this outsider element that has gained the band an impressive cult following. Like kindred spirits Hope Of The States and British Sea Power, the band has thrived on this dedication. They're in regular contact with fans and friends through official mailouts, rather than via mainstream radio play or corporate advertisements.

Yet this isn’t the only thing the band have in common with the two previously stated, especially in the case of British Sea Power: iLiKETRAiNS previously supported the Brighton five-piece at a tiny show at Leicester’s The Musician (review here). While the band received a muted reception in front of BSP’s rabid fanbase, they are the first to note comparisons between the bands.

"I’d say there are definitely some similarities between us and British Sea Power, in both our music and our fanbases, but I think it's due to the fact that both of us weave a lot of different elements into our sounds. I mean, I've heard us both being labelled as ‘post-rock’, but it's not like we all listen to Godspeed You! Black Emperor. At least in our case we all listen to different music, and are inspired by different things."

Call them pretentious, or obtuse, if you wish, but iLiKETRAiNS are one of this green and pleasant land’s greatest musical hopes. It may come to be that they never escape their cult following, but if that’s the case you are highly recommended to drink the Cool-Aid and see for yourself why so many have donated their lives to the cause of this band.