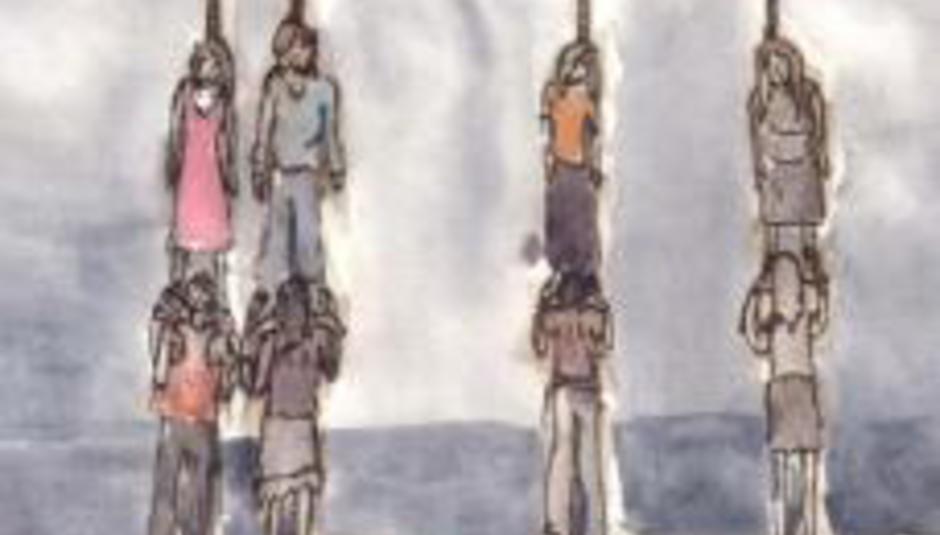 They Don't Sleep are a London-based four-piece whose exquisite take on the post-rock formula – packing more twinkles and sparkles into their songs than many other slow-burning rockers – grabbed DiS’s attention with a self-titled demo EP. Our Matthew Butler was moved to write, “With enough emotional clout to fill the Grand Canyon twice over, these songs have the ability to leave you speechless.” You can read the full review here.

Next came another EP, entitled The Drawing Game; again, we fell over ourselves trying to find the words to accurately convey what we were feeling. “Sit back, strap yourself in and brace yourself: The Drawing Game is an exhilarating listen,” was just one of many congratulatory sentences penned, at the end of which was a positive eight-out-of-ten score. You can read that review here.

So moved were we, indeed, by the band’s latest EP that DiS invited the quartet to perform at this weekend’s DiScover Club, at Notting Hill Arts Club, alongside Jairus and Blood Red Shoes. The band’s pianist/vocalist Glenn Kerrigan kindly responded to a few questions we sent his way, too. So, read this, read about Jairus here, and then get yourself along to tomorrow’s free show. Full details of the gig, which runs from four ‘til eight in the afternoon/evening of October 21, can be found here.

Enjoy, and see you tomorrow, if you know good music from great music…

Please give us a little background on the band: when you formed, where, and what you were doing beforehand, musically or otherwise…
They Don’t Sleep is Glenn Kerrigan (piano/keys/vox), Will Kendrew (bass), William Young (guitar) and Andi Newman (drums). The band started in April 2004 at the University of Westminster where Will, Ben (former guitarist) and myself attended along with members of Optimist Club, Emmy The Great and Tiger Force. Will and I got drunk on girls drinks and listened to The Notwist a lot, and decided to write some songs. As we recruited a guitarist and drummer our sound developed into piano-and-bass-led instrumental pieces. We spent the year gigging and recording our demo before Ben decided to leave the band at the end of last year. We took a while to regroup and recruited William who brought a new creative lease of life to the band. The new material on the EP was written as a collective and the sound reflects that. In the past the music was predominantly piano-led, but now there is much more of a balance between the instruments.

The Drawing Game is your latest release: was the EP totally funded by yourselves? What was available before it? Are there other releases in the pipeline?
Our focus has always been on the live shows but after William joined the band we needed to get some new material down to keep the momentum going to get back at the stage we were at when Ben left . We had been handing out the 2005 demo for free for over a year and we needed something new, quickly. We didn’t really have time to think about trying to get it put out as we recorded it live (with a couple of overdubs) in a weekend with our friend Dave Moore at Pheonix Sound, and we had this product that we needed to get out so we got it made up ourselves. We’re hoping to get back in to do another EP/mini album for a February release.

How has the band’s recorded material been received, generally? I see that there’s a couple of good reviews on DiS, at least. Is feedback generally positive?
Feedback has generally been encouraging. It’s our first recording, though, so we still have a lot of opinions and ideas about how we want to approach the next one.

What about live? Do you think you’re a band that comes into their own on stage, or are you as comfortable in a studio as you are in the live environment? Have you played many corners of this country? Abroad? What are your touring plans for the near future?
We are definitely more familiar with the live environment compared to being in the studio, but I think every band thrives on the energy of live performance. We’ve always felt it to be the context in which we want people to experience They Don’t Sleep, so we’ve always concentrated on getting out about as much as we can. We’ve done a couple of small self-organised UK tours, and hope to expand on these in the future.

Have you played with any bands you really admire? Are you generally booked onto ‘post-rock’ bills, or are you able to play with an assortment of bands, style-wise?
We’ve played with a lot of good (and bad) bands… The Appleseed Cast was a notably enjoyable show as were the couple of dates when we supported 65daysofstatic. We have also become friends with a lot of bands at a similar stage to us. Guys like Tired Irie, Optimist Club, Her Name is Calla, The Strange Death of Liberal England, Brenda and The Pirate Ship Quintet have all had to put up with our drunken hooliganism at some point of the last few months, so thanks to them.

Are you comfortable with the post-rock categorising, or do you feel that the genre’s a little too easy to apply to any band that plays their guitars a little slowly, or that might own a copy of Young Team? If you had to pitch your band, in a line, to a promoter/whatever, what would you say?
I do think that the ‘Post’ umbrella would probably be physically big enough to protect most of England from any rain this winter and that it is used carelessly, but I don’t mind it too much. I think that while there are definite elements of post-rock in our music there are other influences from outside the bracket, from genres as far apart as hardcore and classical. That keeps it exciting in our minds, and hopefully other peoples’ too. If I was pitching to a promoter I would probably say… “listen to this if you can be arsed”. (Click here to have that explained.)

Is there any interest from labels brewing? From a personal point of view I can’t imagine the band being unsigned for all that much longer? Have you had any interest in the past from labels?
We had a fair bit of interest after the last demo before the line-up change and we are just getting back to that point with this recording so we’ll wait and see. We’re at the stage where we are definitely looking for the right people to work with in the future.

Have you had the chance to hear either of the bands you’re playing with on Saturday? Looking forward to the gig? Played it – the afternoon show – before? What should readers expect from your live set?
I’ve heard both the bands and we are RoTa virgins so we’re really looking forward to it! It’s also going to be a slightly belated birthday celebration for myself, as well, so don’t be surprised if the whole of the venue gets invited back for a party…