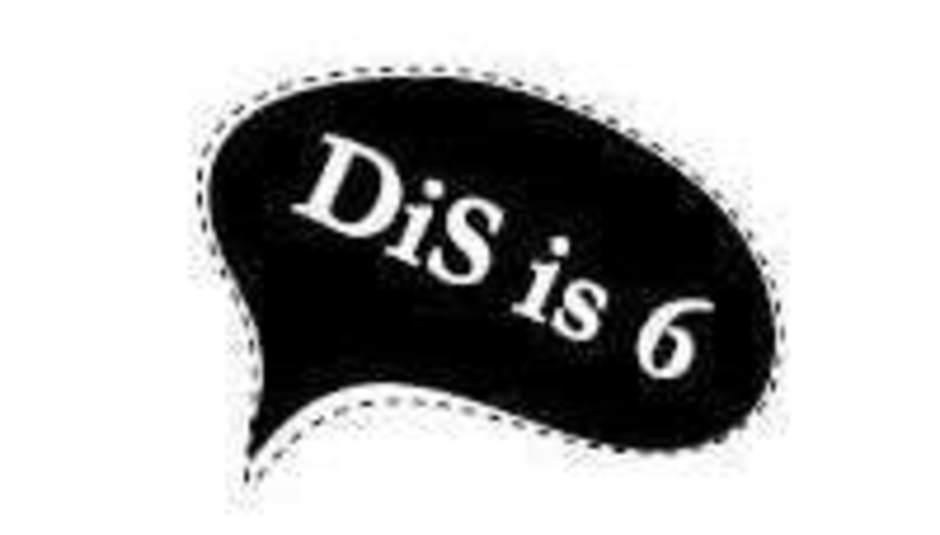 As an aside to our continuing countdown of DiS’s favourite 66 albums of the past six years – i.e. the records that have moulded and inspired DiS over its six-year lifetime; we’re six this month, you know – here we present to you a collection of top sixes from the collection of wonderful individuals we like to call The Team.

Every regular DiS contributor was invited to submit their personal top six, the half-dozen albums that have meant the most to them during DiS’s existence. Below are the results, in alphabetical order. A couple of writers have kindly expanded on their selections; those that didn’t initially are invited to explain their choices using the comments below.

DiS’s countdown of Our 66 will continue next week, when we’ll run through the records at numbers twenty to eleven; believe us when we say there are some really special albums in the top twenty, and a number of surprises! For now, though, enjoy the picks of our much-loved and appreciated writers (note that the 1-6 order isn’t necessarily indicating preference; it’s simply for ease of digestion)… 1 DJ Signify
Sleep No More
(Lex – released 2004; review)
Most hip-hop acts present themselves as dangerous by broadcasting menace with tales of urban violence and sexist bragging; with two turntables and a bag full of beats, DJ Signify heads straight for the cranium with samples and arrangements that sound like they're scoring the activities in Jason Voorhees's basement. With Sleep No More, Signify created the aural equivalent of a horrific nightmare, a kind of parallel universe which, while looking like our own at its darkest, was a place where the monsters were clearly in charge. Be afraid. Be very afraid. 2 Amon Tobin
Out From Out Where (pictured)
(Ninja Tune – released 2002)
Tossing jazz in a bucket for bit and taking a trip into the future, Tobin created the perfect soundtrack for walking around the urban metropolis. Out From Out Where sounds like it was constructed specifically to score William Gibson's sprawl series; it's all hard edges built on multicultural brick-a-brack, with beats gorgeously sliced and diced to perfection. Not the man's most seminal work, but still essential.

3 The Mad Capsule Markets
010
(Palm Pictures – released 2003)
Cistm Konfliqt got more press and Osc-Disc arguably received more kudos; a pity, because 010 kicks the hell out of the pair of them. The bass is chunkier, the riffs more ferocious and the drums are everywhere they wanna be. Two more albums like this and the MCM could've broken big in the West; as it is, sadly they are no more. 4 The Twilight Singers
Blackberry Belle (pictured)
(One Little Indian – released 2003; review)
If you were to compare all The Twilight Singers albums, really, the edge goes to Powder Burns, but for the Afghan Whigs faithful, this 2003 platter is the moment when Greg Dulli announced his return to making music and all was once again right with the world. The piano bars that open ‘Martin Eden’ still choke up the throat and make the neck-hairs stand on end.

5 Tool
Lateralus
(Zoo – released 2001; review)
One album every five-years could be seen as taking the piss if the much-awaited record wasn't as gargantuan as Lateralus. This album should be Exhibit A in the argument against "why people prefer their entertainment simple"; insane time signatures, inside-out mixing, asymmetrical song-structures and riffs that can only be described as triumphant. Lateralus is the reason the superb 10,000 Days received such a lot of stick; we're still so in love with this monster.

6 mclusky
mclusky Do Dallas
(Too Pure – released 2002)
In 2002, the British music press were touting the likes of The Vines and The Hives as proof that punk rock had risen once again to destroy manufactured pop. Really, they should've been looking no further than Wales; mclusky Do Dallas is addictively pop riffage disguised as chainsaw-biting punk; a bike-chain in a bubblegum wrapper. There's no filler on this disc at all: nearly every track is a bona-fide classic. We really dropped the ball on this one. Nice guys sometimes finish last. Damn! 1 Interpol
Turn On The Bright Lights (pictured)
(Matador – released 2002; review)
Forget The Strokes for being the guiding light away from nu-metal and boring acoustic dadrock: this was the record that influenced and will continue to influence many generations.

2 British Sea Power
The Decline Of...
(Rough Trade – released 2003; review)
Just for writing songs about the Lake District, and attractive men called Theodore, and brilliantine mortality - whatever that means; but most of all for restoring everyone's faith in original, tuneful and thoughtful home-grown music.

3 The Cooper Temple Clause
See This Through And Leave
(BMG – released 2002; review)
There were six of ‘em and they had strange hair. They also had a mish-mash of influences and weren't afraid to use them, sometimes in one song ('Panzer Attack'). Sadly, things never were as good after, but boy did this album make 2002 a better year. 4 The Rakes
Capture/Release (pictured)
(V2 – released 2005; review)
Who'd have thought that a half-hour monologue of everyday, nine-to-five humdrum set to Joy Division- and PiL-flavoured riffs would be so rousing? Me neither, but even now I stick this on religiously every morning before setting off for work.

5 The Coral
The Coral
(Deltasonic – released 2002; review)
Scousers they were, but with no overtly ridiculous emphasis on being humorous. Or The Beatles. Or, indeed, on meeting any stereotype. Instead, they'd obviously spent their formative years raiding their siblings’, parents’ and grandparents’ record collections, otherwise how else would they have conjured up such a fabulous cacophony of psychedelicpunkskiffleblues madness?

6 Adult.
Anxiety Always
(Ersatz Audio – released 2003)
Electroclash always was doomed to failure – it could have begun and ended with this record. Siouxsie Sioux meets Kraftwerk with a bit of Can dementia thrown in for good measure. Husband and wife they may be but don't let that put you off, as this album crosses all emotional boundaries from bitter and twisted rants to sensitive coos of pleasure. 1 Will Haven
Carpe Diem (pictured)
(Music For Nations - released 2001; review)
After suffering from vast periods of indifference as an indie-kid teenager, this album was my route into really heavy music and the reason you see so many metal reviews on this site.

2 Alkaline Trio
From Here To Infirmary
(Vagrant - released 2001)
My first emo album. I played it when I got dumped, sang along, cried a bit, got emo. You know the deal. An incredibly funny but dour album.

3 Slipknot
Iowa
(Roadrunner – released 2001; review)
Their debut album just sounded like pop music to me, but this was anything but. This album was the sound of violence. It was beautiful and vindicated metallers nationwide as it hit number one. 4 Oceansize
Effloresce (pictured)
(Beggars Banquet – released 2003; review)
I'd followed this band from being an amazing unsigned band all the way through to the album, and what an album. Their expansive post-rock opened yet more doors for me.

5 Hell Is For Heroes
The Neon Handshake
(Chrysalis - released 2003; review)
This still stands as the most polished piece of British rock I own. Some great songs with some awesome production means that I'll surely be listening to this in a decade’s time.

6 Opeth
Ghost Reveries
(Roadrunner - released 2005; review)
My love of classic prog’ and death metal came together in the most marvellously majestic fashion last year. I remember playing one song in the DiS office and everyone wondering why I played five. It was just a very long song!

1 Subtle
For Hero: For Fool
(Lex – released 2006; review)
About as hard to pin down as fly attracted to a light, For Hero: For Fool is too much of a mess to even attempt to dissect its various genre inhabitants. Be sure however that when ‘The Ends’ climaxes, 50 minutes of your life will have elapsed and I’ll be damned if you miss them. Oh, and the artwork looks like that. Yes way. 2 Edan
Primitive Plus (pictured)
(Lewis – released 2002)
All mediating along each guest rapper’s loves and hates of hip-hop, it is Edan’s sampling however that proves to be beyond compare. On occasion, it is unfathomable how he mangles his choice, bizarre excerpts into something avoiding tackiness. As such, the album is spellbinding, its warm '80s-inspired production even serving to make this one of the more comforting hip-hop releases of late.

3 The Silver Jews
Bright Flight
(Domino – released 2001)
It’s not their best record - hell, it’s probably not even their third-best record – but when David Berman delivered from the brink ten more musings, it was enough to rejoice. Luckily, a poor ‘Joos record is still bloomin’ marvellous and when he manages to rhyme “Tennessee” with “ten I see” on, err, ‘Tennessee’, you know this record has you be'en the horns.

4 mclusky
mclusky Do Dallas
(Too Pure – released 2002)
I don’t profess to having any deeper meaning to Do Dallas then the guitars make me want to jump around and when Andy Falkous simply whispers over the bass of ‘Fuck This Band’ the world just seems a far, far better place to be part of. 5 The Wrens
The Meadowlands (pictured)
(Lo-Max – released 2006)
The term ‘criminally underrated’ was invented for The Wrens. Crushed by what can only be described as production hell for every one of their releases, the sound of The Meadowlands is of experience, worn-down experience barely able to hide contempt and pure despair on occasion. If you haven’t got this, your 2005 could have been a slight bit better.

6 The National
Alligator
(Beggars Banquet – released 2005)
It’s quite clear when some bands’ singers feel they have a pretty great lyrical turn; they centralise and repeat it, they make it their song title and they make sure everyone is aware of its brilliance. Matt Berninger, however, penning handfuls of glorious one-liners, is quite content with crooning them in monotone glory, only penetrable to those who are willing to give time to him and this glorious record.