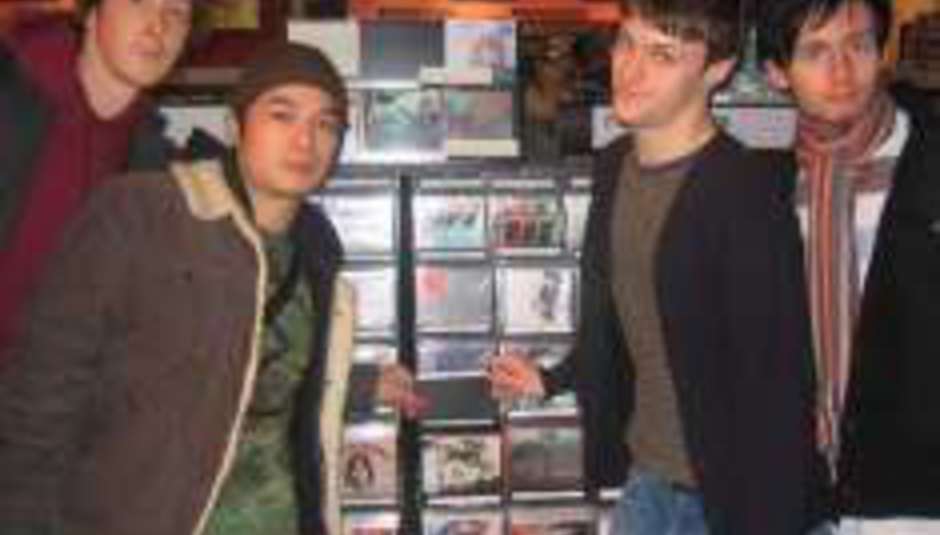 Jairus are a Kentish five-piece whose relatively low profile hasn’t prevented them trekking to many a corner of the world – the band, together since 2001, have crammed into a van long enough to see the sights of Eastern Europe, have visited Scandinavia, and have even ventured as far as Japan. That picture to the right was taken in Tokyo, no less.

This weekend, though, the Big Scary Monsters ‘signed’ outfit (their last EP, a self-titled effort, was released through the Oxford-based label) will be performing a little closer to home – they’re to headline DrownedinSound.com’s DiScover Club at the Notting Hill Arts Club, click here for full details. The band – Adam Bray (vocals), Dan Lucas (guitar, piano), James Gillet (guitar), Mike Ager (bass), and Symon Minter (drums, electronics, samples) – have attracted comparisons to the likes of Refused and Mogwai in previous reviews. That kind of company makes DiS very excited indeed, and so excited were we that we fired some DiScover-style questions the way of Lucas, who kindly responded as follows…

When'd the band get together, and where? What were you doing beforehand, musically or otherwise?
Jairus formed in October 2001 – we were all aged 19 and had all been in various bands for years. The only one that became moderately successful was Dead Life Portrait, the band Symon played drums for prior to Jairus. Aside from being musicians, it was your typical story of people at that age: college students with something to say, aching to make a difference and create the band we 'wish' existed!

You released a self-titled EP on BSM - happy with how it was received? Was it your first release, or are there other records readers should be checking out?
Yes, the EP was released last November, it was as well received as we hoped it would be, as it's slightly more diverse than our first album The Need To Change The Mapmaker, which is still available on Skipworth Records. We thought we may lose a few fans as it's slightly harder to get into than the previous record, but the general consensus is that most people actually embraced the slight progression, which is exactly what we had hoped for. After all, nobody likes it when people expect a band to sit in the same rut for their entire career.

Your live show: would you say this is the ideal place to witness Jairus, or is the band as comfortable in a studio as it is on stage? Have you been able to play with many bands you've particularly admired?
It's definitely a different experience seeing Jairus live – we’re a much heavier live band than we are in the studio. They're two different worlds in fact: as a live band, Jairus are extremely raw and intense, as we all find it kind of boring when you see a band live and they sound exactly like the CD. Live, I think Jairus are a bit more punk-rock than in the studio: it's just kind of turn up, very rarely sound check, and play loud! We spent the first three years or so playing hardcore shows after all! As for playing shows with bands we admire, we've shared the stage with Girls Against Boys, Last Days Of April, Shai Hulud – bands we all love. My personal favourite experience was doing some weekend shows with Unwed Sailor two weeks ago though, as they’re one of my favourite bands ever!

What sort of comparisons do you attract? A listen to your MySpace songs doesn't lead to anything obvious, and your cited influences are fairly diverse...
Jairus have been compared to 'elements' of a lot of bands, but nobody's every really been able to say “Jairus sound like this band...”. Pink Floyd, At The Drive-In, Mogwai, Pelican, The Casket Lottery, Joy Division: that's a list of some comparisons that crop up often!

Have you heard any of the other bands you're doing RoTa with before? Looking forward to seeing them? Future release plans... what's coming up?
I've not heard of any of the bands that are playing on Saturday I'm afraid, but I checked out Blood Red Shoes and really liked them. We're looking forward to playing though, as last time we played there, in January, it was awesome. Future plans include our new album, which we're halfway through writing. That will be released on BSM next year, and we're filming our first video in three weeks! The song for the video ‘If There's An Art To Cowardice, You Must Be Picasso’ will be available on our MySpace page and website by early next week!