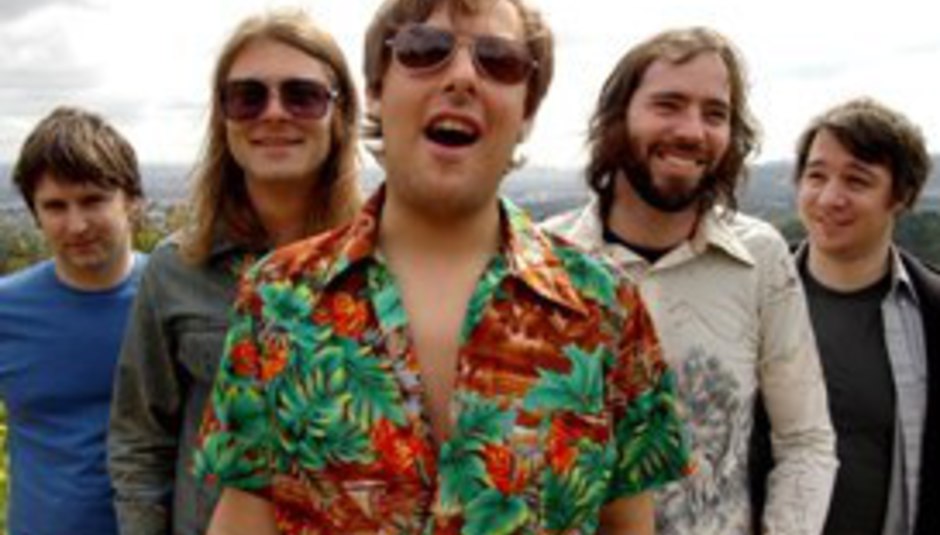 DiS meets Comets On Fire: "A little house party where everyone’s drunk and raging: I love it."

DiS meets Comets On Fire: "A little house party where everyone’s drunk and raging: I love it."

Stylistic specifics surrounding Santa Cruz-spawned quintet Comets On Fire are a little vague to say the least: a cursory scan of online references – your Wikipedias and AllMusics of this world – reveals little but indefinite categorisations and pigeonholes stretched so wide you could shove an extinct Dromornis australis into the space available. They are, quite simply, bastards to sonically pin down.

‘Indie noise rock’ – three entirely different strands of the guitar-based music family tree, there, all converging within the core of five individuals: Ethan Miller (vocals, guitar), Noel von Harmonson (electronic trickery), Ben Chasny (guitar), Ben Flashman (bass), and Utrillo Kushner (drums). The magic these men conjure while stood sweaty and proud upon a stage is truly wondrous: the sound is all-consuming, the effect on all five senses such that the body almost crumples, unable to withstand the incessant force it’s willingly subjected itself to.

It is rock that rolls you, it is a noise that stings and burns; it’s the sound of thundering hooves and pincer movements, hippie-jam-fests scorched by the purest acid. It’s psychedelic and otherworldly, and means absolutely everything in the realm of the here and now. Here, now, Comets On Fire tumble their audience like raked leaves; their occasional deviations into melodic territories comprising but tiny facets of a set that relies primarily on primoridal A-to-B directness. This is pressure on your chest. This is a vice about your head. This is quite unlike anything you’ll witness from any other band of mortal men.

But we’re getting rather ahead of ourselves – the band’s ICA performance of early October ’06 does indeed leave all attendees disorientatedly weaving their way from the venue like fragile shells of their two-hours-previous selves, but we need to rewind a little further back: support act Chris Clark is yet to take the stage as DiS sits down with four-fifths of the band, on a landing beside a ladies’ convenience, for a brief chinwag; it’s a social affair, as DiS’s notes were so swiftly scribbled that they’re next to illegible. Only Miller is absent, on interview duty at the top of the same stairs we’re lounging across.

So, what do you want people to read about you?
Kushner: Is this an actual, serious question!?

Well, these notes I’ve made… I’m not sure any of them are ‘proper’ questions…
Flashman: C’mon, just see what we bite at.

Okay, well let’s wade in with something obvious: how have the band’s fortunes fared since the move to Sub Pop? (The band’slast two albums, 2004’s Blue Cathedral and 2006’s Avatar, have been released via the respected indie label.)
Kushner: Well, I can say that, in the beginning, I was actually opposed to Sub Pop. Like, I wanted to be on a smaller label, and I was kinda coming up with whatever reasons… But they treat us so well, it’s unbelievable. Everything we’ve accomplished, in this band, it wouldn’t have been possible without them. I mean, obviously they’ve a lot of catalogue and money behind them, but they also have, like, thirty people working for them, and these sustained resources to help you as a band. I feel very fortunate and very lucky, especially since we’re all kinda weekend warrior dudes – we don’t tour all the time, but we still get all the benefits that the label offers us.

I guess you hadn’t toured so widely prior to hooking up with them? I mean, I must have seen you play here, in Britain, a good five times since Blue Cathedral’s release…
Kushner: I think we’ve run up quite a tab!
Flashman: Which will be paid back.
Kushner: But yeah, they helped to buy plane tickets, they helped with bookings, they helped us get hostels when we were on our first European tour… I don’t know all that many labels that can offer that level of support.

Are you still crashing at hostels these days?
Chasny: Not so much these days, actually.

And I guess the venues gradually get bigger, too? This isn’t exactly a poxy place, the ICA…
von Harmonson: Well, we’ve played Shepherd’s Bush [Empire] and the Royal Festival Hall, in London…

How was the Royal Festival Hall show? (The band opened for Julian Cope, review here.) Kushner: It was weird. I think that, actually, the bigger the venue, the worse I feel and the more insecure I feel.Y’know, a little house party where everyone’s drunk and raging: I love it. Big monitors and a sound guy, I feel like I fall apart.
von Harmonson: There is a bigger pressure upon you in those professional environments. Y’know, we don’t have a professional air about us.

But I heard that your soundcheck took forever…
Flashman: Things were breaking…
von Harmonson: The power button isn’t supposed to turn itself on.

What do you do if things start misfiring during a set?
Kushner: Well,we just played this warehouse party in Brooklyn, and the power went out in the middle of a song.
von Harmonson: We got this tribal clapping and drum circle kinda shit going on…
Kushner: Then the power came back on and we went back in…
von Harmonson: Y’know, once it starts, it’s not going to come to a halt just because some amp breaks or someone stubs a toe, or something.
Flashman: If someone throws a pedal against the wall…
Kushner: …or pukes on themselves.
von Harmonson: Anyone can be the leader…

So you’ve never been tempted to just march off?
von Harmonson: No, never.

Maybe you could tonight, and make some sort of statement. This is the Institute of Contemporary Arts, after all…
von Harmonson: We didn’t even know what ICA stood for ‘til you said that.
Chasny: I did.

Do you think it’s an appropriate venue for a band that’s been so difficult to piegonhole, though? This is somewhere where art is interpreted very differently by many different people…
Kushner: Sure.
Flashman: We shouldn’t be confined just to art places, though; we should be able to be interpeted differently whereever we are. If someone interprets us a dog shit, that’s fine.

Bearing in mind all the good things that’ve come your way, all the positive press, have you suffered any critical pannings? Do these things matter a damn? You must get people coming to shows after reading reviews, particularly of your latest, ‘mellower’ album Avatar, and being blown away by the noise…
Kushner: Yeah, well, like most bands we’re… Okay, I work at a music distributor, and Noel works at a music store, and we all have big record collections and very different tastes. Y’know, Bruce Springsteen’s a cool guy…
Chasny: I like Bruce Springsteen, too!

But The Killers like Bruce Springsteen. Does that mean people who are into The Killers should be buying your records?
von Harmonson: If they want to!
Flashman: Just because you’re a Killers fan, doesn’t mean you can’t do what you want.
Kushner: I was also going to say that on this last record we spent a lot more time in the studio, and had a much bigger budget…
von Harmonson: …relatively speaking…
Kushner: …and the album is maybe a little mellow for Comets, but our live show is still as retarded as ever. What might be on record and what you see live, it’s very different.

Do you think the live show will always be vibrant, and riotous? Loud and so on…
Kushner: Well, I think the last couple of tours we’ve been on, I’ve really been feeling it. Not so much mentally, but I get exhausted physically. But…

But is that down to a hectic schedule or because of the way you play?
Kushner: Well, there are those two different things.
von Harmonson: Y’know, playing live for me has always been like a bullet train of adrenaline, that’s purged or whatever, collectively released in different ways. I guess, as we get older, I can’t say that we’re gonna fuckin’ play like that when we’re forty or whatever, or that we’ll even speak to each other when we’re forty, but we wouldn’t get out and go play golf or something.
Kushner: I hope that we’ll always keep the live show…
von Harmonson: …we just try to make it fun and exciting.

I guess that’s good, to have totally different experiences when you’re playing a record at home and watching the band with a couple of beers?
von Harmonson: I think about the people that have read reviews of the new record, and the reviewers have written, “Yeah, they’ve kind of mellowed out a bit, and they’re kind of sounding like The Allman Brothers”. Then they go buy the CD and they’re like, “Yeah, y’know, they’re kinda mellow”. And then they come see us live, and they see us all drunk, with our guitars over our heads, knocking each other over.

Have you ever seen fear on a member of the audience’s face?
von Harmonson: Well, we’ve done some big gigs, with Sonic Youth, and you get these fourteen-year-old kids jumping right to the front of the stage once doors open, and when we come out it’s like… (makes a shocked expression)

Kushner: When we did Mudhoney’s ATP, what was awesome is that they seemed to watch every band that they invited. I don’t know how they did that!

And this, the band, is still a whole lot of fun?
Flashman: Yeah, oh yeah.

Avatar is out now on Sub Pop. Photograph by J Bennett.