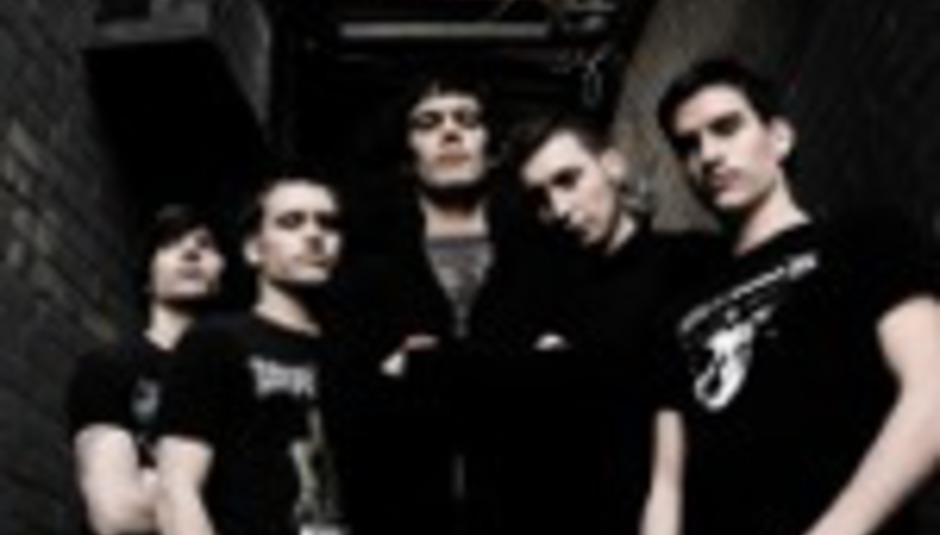 Every year I alight from the M4 at Junction 11 to participate in decreasingly rock ‘n’ roll antics at the Reading Festival. However, if I ever made a serious error and tried to end my journey a junction earlier I might have rolled into a British metalcore extravaganza. Yes, this band is named after part of a motorway, but you must also take note that Exit Ten are bloody brilliant.

The crux of the group lies between the three brothers Steele – Stuart (guitar), James (bass) and Chris (drums) – and their friend Joe Ward (guitar). Starting out many years ago playing covers but quickly moving onto their own material, the band felt they were missing the final part of the jigsaw. As every great second chapter in a biography goes, though, they found their livewire frontman Ryan Redman who cut his singing teeth in a local touring indie-funk band called Ant Salon. The rest is history, but we’re interested in the future as well which is why we decided to have a chat with two of them…

You've been going for a long time. Do you think that's helped or hindered your progress?
Chris: We've been playing together, as in the three brothers and Joe for a long time yes, but, with Ryan we've actually only been around a couple of years. We're a tight unit and we feel we've really got something together and we feel we've achieved a lot so far!
Ryan: For a band our age we can only have benefited from the time that we have been together. The more time we are together as a band, the better. It isn’t something that could hinder us.

I've seen you about five times this year and Ryan, your voice has improved immeasurably. How's that happened? Singing lessons or just practise?
Ryan: I appreciate you saying so, thank you. I would encourage anyone looking to sing in a band to take [lessons]. They help not only with your voice but with your breathing while performing. I’ve never had the money to have them myself, so whatever technique I have has indeed come through practice and I suppose maybe even drama lessons at school.

You’ve just toured with Soilwork. How are you finding it and what have you learnt?
Chris: It’s our fourth tour but you always learn from experienced bands you get to play with. It’s been really good and we've been getting some good positive reactions from the shows.
Ryan: I have learnt that the RAC can’t fix our van and will try to take us home if we break down and that a full English breakfast never gets boring.

It is their incredibly comfortable live performances that help mark Exit Ten out from the rest of the current crop. That, and the fact that they’ve got a few killer tunes in their back pockets. On their recent nationwide tour with Swedish metal legends Soilwork they ought to have been heckled and booed within seconds of arriving onstage but instead, somehow, managed to win the most notoriously difficult crowd over with some glorious melodies and a massive sound that belies their experience and age.

Chris: I think people must look at us and want to make judgements and some people are very quick to dismiss us, but on a few occasions we've had people heckle and then actually message us after the show and say how much they enjoyed it! It’s not a standard formula because of what Ryan’s doing so it just takes some people time to stand there and listen get it and a lot of people seem to appreciate that!
Ryan: I have been expecting some things to be thrown at us. It would be nice: food; beer, perhaps. But above all, pants. Please throw pants at us. Our confidence on stage as a band comes through the passion we feel for what we are doing, and the belief in us all that we can succeed with this. London is like a second home to us these days and there are some fantastic people who have been coming out to the gigs to show their support. This helps us massively, and it has been incredible to have those people helping us sing the words.

As a metalcore band and probably one of Britain's better unsigned ones, how do you see yourself fitting in? Like I said, you went down well with Soilwork just as well as you did with Winnebago Deal.
Chris: We don’t really want to be considered just a metalcore band. We really want to progress and develop our sound into something bigger, but we certainly seem to have that crossover aspect to our sound where we're able to play to different types of audiences, which certainly works in our favour! We don’t seem to really sit that comfortably in one genre and that can only really be a good thing because we're not lumped in with loads of other bands doing the same thing!
Ryan: Not to take away from the very good metalcore bands out there, but we have far bigger ambitions then to just be a metalcore band. We are not the finished product that we aspire to be.

You recorded your debut release with Andy Sneap. How did that come about and will you be recording with him again in the future?
Chris: Back when we were talking to a few labels, Andy offered his time and we jumped at the chance! It was an amazing experience and we'd certainly enjoy working with the Sneap again.
Ryan: He has a Jag with the number plate METAL. We are definitely working with him again!

You seem to have a deep admiration of MySpace and Ryan always talks about it onstage. How do you think you've benefited from the site as a band and as people?
Chris: It’s just a great tool for bands and an opportunity for underground bands to be heard!
Ryan: I thought I spoke about it with a certain air of distaste. Obviously my acting skills leave a lot to be desired! I think the general net surfing public need to be given the least amount of effort to find something on the internet, and MySpace offers that. You know that if a band is even the slightest bit serious about what they are doing, they are going to have a MySpace profile.

With three brothers in the band is there any chance of loads of arguing and hair pulling or is it a united front all the way?
Chris: We bicker, but we're really very laid back, there’s never full-on fisticuffs and black eyes! We all want the same thing so it works pretty well.
Ryan: This is the most sublime family unit I have ever encountered, honestly. It makes it incredibly easy to be in this band. No egos. No attitudes. We always agree.