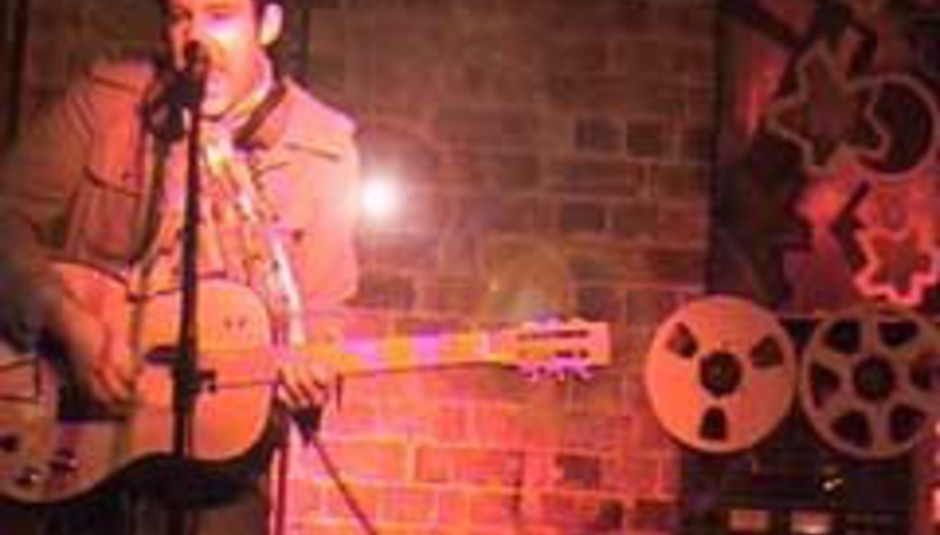 Sometimes laziness gets the best of all of us. After catching Napoleon IIIrd on a humid Saturday afternoon in August, at The Leeds Festival, on the basis of being promised some quality solo-songwriter action and becoming enraptured by what turned out to be an eleven-man pop-indie-folk-rock celebration, I sought out the collective’s spearhead James for a Q&A.

Two weeks later, I managed to drag myself to the computer and wrote some of those Qs; after a similar timespan, James, or Sir Napoleon to you, produced some As.

But don’t go thinking any penchant for postponement or a lethargic nature is present in the music of Napoleon IIIrd, either in the insular surroundings of his recorded materials - represented most recently and comprehensively as two EPs on the Brainlove Records label - or on the live stage, where any claustrophobic nature is blasted away by a euphoric energy and a strong team spirit, even though it’s obvious who the captain is.

I ask James how it felt to be surrounded by like-minded musicians instead of being the sole focus of the spotlight.

“Leeds Festival was great, mainly because I was able to get all my friends to play; we had a bit of a party really. I think that came across judging by the audience’s reaction.”

Which, as the set drew to a climax, was as filled with euphoria as bodies and faces crowded onstage. Indeed, it’s quite a rare sight to see a crowd increase in size more than tenfold as a set progresses, especially for a relatively unknown band, and for them to sing-along, arms aloft, to a song ninety-five per cent of them hadn’t heard. You know something special is happening.

“I wouldn’t say that the crowd’s reaction surprised me - it rather made me extremely happy and proud of what we had all achieved. I don’t think that anyone in the crowed could have enjoyed the set more than I did. It was amazing fun.”

So will this highly-positive reaction, on both sides of the guardrail, encourage James to work with a full band on record?

“I find it very difficult to write music with other people: I generally know what I want from a song and take criticism, constructive or otherwise, very badly. I am a bit of a git like that, I’m sad to say. Saying that, though, I am sure that I will one day write, record and perform music with a band. Just not for now, I don’t think.”

Right now, he might be choosing the right option. Although given new life when being performed in a group, Napoleon IIIrd’s music, with its previously noted insular nature, is firmly the work of one mind. From the sampled rhythm sections, mashed electonics and shouts of “I love this city but I wont walk home at night” in 'Defibrillator' to the layered vocals of 'Celebrity Standups', it’s hard to see how James’s unique blend of pop-rock and folk songwriting could co-exist with the ideas of others.

Only time will tell. The near future: James has a short UK tour planned for December, although specific details of the set-up are few and far between. After that, a single and a full-length will be released, both via Brainlove Records and both in the new year.

Will Napoleon IIIrd rise from his cocoon and fill his music with the same air of expansion as that heard from the live stage, or will he delve into further into claustrophobia and solitude? Sometimes it’s best to wait and find out the answers yourself.