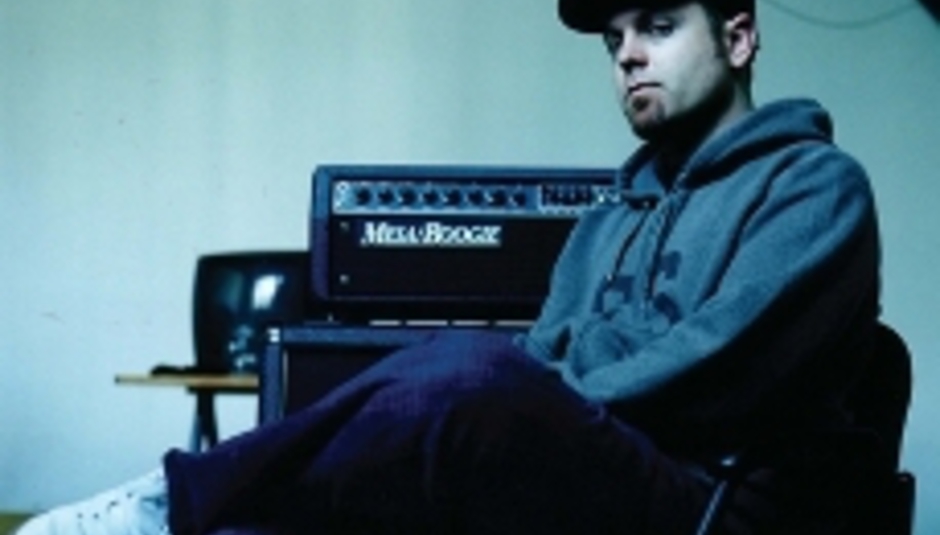 The clock on the wall reads... Fifteen minutes with DJ Shadow

The clock on the wall reads... Fifteen minutes with DJ Shadow

DiS is used to meeting musicians at their hotels, but rarely do we venture so far from the writhing swarms of pavement dwellers that so frustratingly characterise the walkways of the capital’s central streets. We’re in Swiss Cottage, a corner of town remarkable for, well, a cottage. That’s about it – aside from a library and leisure centre, DiS sees little in the way of attractions. Not that we’ve time to dawdle and take in any sights, anyway: we’ve a schedule to keep to, and our fifteen minutes with DJ Shadow have to be made the absolute most of.

The Californian DJ/producer/musician – aka Josh Davis (incidentally, he was born in a place called Davis) – waits for DiS in one of his hotel’s meeting rooms. He’s at the end of a lengthy table, empty chairs surrounding it, as we enter from the other side of the room; beside him is a flipchart, or perhaps a white board, suggesting he’s been graphically explaining the Hows and Whys of his latest album, The Outsider, to pre-DiS interviewers. The pair that leave prior to our arrival had filmed Davis, or Shadow (we’re never really sure what to call him, so from now on we’ll stick to the latter), and he wasn’t wholly prepared. “If I’d have known, I’d have shaved,” he says from below a Nike Air Jordan baseball cap; he seems relieved that DiS has only brought an ancient Dictaphone to the question-and-answer session.

The Outsider is Shadow’s third studio-born long-player, or his fourth if you count UNKLE’s 1998 Psyence Fiction LP, his collaboration with the head of his then label, Mo’Wax’s James Lavelle, as a Shadow album. The man himself certainly does. But DiS isn’t here to dwell upon past glories – or flops, if certain second-opinion summaries of said UNKLE album are to be taken into account – as the release of The Outsider is all but upon us. A significant stylistic departure from Shadow’s previous two long-players, 1996’s Endtroducing and 2002’s The Private Press, The Outsider is very much a collaborative project. Alongside a flood of rappers, including Q-Tip, David Banner and Lateef the Truth Speaker, The Outsider welcomes to its lyrical fold Christina Carter of Charalambides, Chris James of Leeds band Stateless, and Kasabian’s Serge Pizzorno and (now ousted member) Christopher Karloff. It’s a far cry from the primarily instrumental make-up of Shadow’s earlier work.

---
"Change to me is the key element in anything moving forward, whether it be James Brown abandoning his chugging R&B in ’66 to create great funk, or Neil Young getting all weird and people wondering what happened to the beautiful harmonies."
---

“It seems that some people don’t like things to change,” says Shadow, responding to the inevitable ‘but will your fans like it?’ question. “Change to me is the key element in anything moving forward, whether it be James Brown abandoning his chugging R&B in ’66 to create great funk, or whether it be, y’know, Neil Young getting all weird and electronic and people wondering what happened to the strumming guitar and beautiful harmonies.

“Every artist has to just TRY to do something different, to keep going. There are times when… well, it’s like waveforms, like visual waveforms. There are times when public opinions are going like this (he waves his arms like a double helix), and times when my interests are doing this, and sometimes they cross and sometimes they don’t. I’ve been making music – putting out records – for fifteen years now, and that’s enough time to start to see how that works. I think, ultimately, as long as I’m doing what I know is right for me, then I think over time these sort of spiky moments when people are like, ‘It’s great… No it sucks… No it’s great’… over time you’ll see people and they’ll say, ‘Oh, I was always behind the record’, even when I can remember it not being like that.”

The Outsider is sure to divide opinion amongst Shadow’s long-term fans, though, regardless of its maker’s commitment to progression and to continually challenge himself. Certain songs, particularly those comprising the record’s first third, will be hard for those favouring Shadow’s mellower side to stomach. Raps are spat, barked almost, rabid and wild, while beats are solid and punchy – a laid-back stoner record The Outsider certainly is not.

“I feel that there’s some people that would hear, as you say, a ‘barking’ rapper on a song like ‘Turf Dancing’,” says Shadow (the song in question features The Federation and Animaniaks on vocals), “and just go, ‘Whoah, I didn’t bargain for this, I bargained for more kinda backpack rap or something – something that’s easily digested, melodic and doesn’t challenge me’.

“Likewise, more hip-hop-y fans of mine will hear something like ‘You Made It’ and go, ‘Well I dunno man, this is a little soft… where's the b-boy stuff?’. And that’s exactly why I like to have those moments on the record. For better or for worse, this is who I am. I don’t comfortably fit in those boxes – I don’t comfortably fit in the hip-hop box and I don’t fit in whatever the other boxes are.”

Shadow explains the title of his new record using those aforementioned boxes.

“The title refers to the little boxes that we construct as human beings, for other human beings, especially to compartmentalise. It’s sort of like shorthand, y’know – here’s this artist, he is the sample guy, he made an album called Endtroducing that he’ll probably never be able to top, and that’s DJ Shadow, okay? Next artist, blah blah blah… But with any artist, you sit there and go, ‘Hmmm, that’s not all there is’, y’know?

“I feel like I’m just getting started. I always saw this as a thirty or forty year evolutionary process and I think any artist would resent [being pigeonholed], y’know? I just found myself at a place where it seemed that people were trying to define who I was, and I had to define who I was, in very clear terms without sparing anyone the extremes on this side, or the extremes on that side. People were saying, ‘Why don’t you just do a rap album, and then do a rock album six months later?’, but I don’t just listen to rap music, so I want my records to be an honest reflection of what I stand for musically. Despite what some people think I represented ten years ago.”

---
"Anybody who has professed some interest in my music before, there’s something for them on this record. I dunno why music is so rigidly compartmentalised."
---

Although the impact Endtroducing had – on a global, Guinness World Records scale (it’s recognised as the first album to be made entirely of samples) – can’t be overlooked, Shadow’s all too aware of its albatross nature: the album’s popularity led to something like deflation when Psyence Fiction failed to turn contemporary music on its head in quite the same fashion, and although The Private Press was more compositionally adventurous than its predecessor, it still dipped more than a few toes into sample-heavy waters. The Outsider sees Shadow at his most creative on an individualistic level – this is a record that’s more Shadow than any other Shadow record, drawing not from other records and artists but from influences much closer to home. It’s in tune with the Hyphy sound of Shadow’s Bay Area neighbourhood, and many contributing rappers are also natives of San Francisco and its suburbs.

“I feel like anybody, like, who has professed some interest in my music before, there’s something for them on this record,” he continues. “When a movie comes out, there are few theatres that only show westerns or only show science fiction films. Movie theatres will show different genres next to each other, and it’s not like that confuses people. So it strikes me… I dunno why music is so rigidly compartmentalised.”

The incredibly diverse array of vocalists performing on The Outsider should go some way to throwing those looking to exclusively pigeonhole it as X, Y or Z off the scent somewhat. How the lyrics were laid down differed from vocalist to vocalist, with Shadow largely taking a back seat so far as content went.

“Some people said, ‘What do you want me to write about? Give me a theme. You tell me’. Some people approached it that way. Other people said, ‘I’m gonna write something and come back to you and you tell me what you think’. Others just said, ‘Gimme a beat’, and five minutes later it was done.

“In a couple of cases the words were written together. The two songs that I had the most lyrical input into were the Chris James ones. In the case of ‘You Made It’, that song was written very specifically about something personal to me, and I didn’t want the lyrics to be such that I could never connect them to why I wrote the song. I wanted them to be loose enough that other people could interpret what they wanted to, but specific enough that it applied to what I wrote the song for. ‘Erase You’ was a similar thing.”

With time rapidly running out – a representative from Shadow’s label tells us to make the next question our last – we check that there won’t be a four-year gap between albums again, as there was between The Private Press and The Outsider.

“Well, y’know, I consider the first UNKLE album in that, and there were two years between Endtroducing and the UNKLE record, so I know I’m capable of it. But that’s why it took so long to do the next one after UNKLE, ‘cause I worked for three or four years straight, and needed to slow down.”

“My whole thing is that – and this is gonna sound like one of those real showbiz-y kind of statements – I have to remember who I am, and not just who my alter ego is. When I’m in tour mode, or album more, or press mode, people are talking to the alter ego… but I really value my family life, and I really value my accomplishments outside of music, whether it be raising my kids or getting our house built, or getting my college degree. I feel like all of that stuff is part of who I am, as well. I’m just…

“I’m an anomaly. I’m not trying to say I’m better or worse, it’s just that I’m a bit different than most of my peers, and sometimes people have a problem with that. God, that sounds lame. Anyway, forget that – I’m just doing what I like to do, and when I go home the first thing I’m gonna do is make sure my kids see their grandparents and their great-grandparents, and that’s what matters to me. Because they’re in their eighties, y’know, and I don’t want to be on the road, non-stop, and suddenly get the call. I want my kids to see their great-grandparents, and that’s my priority when I get home. I don’t know what that says about me, but…”