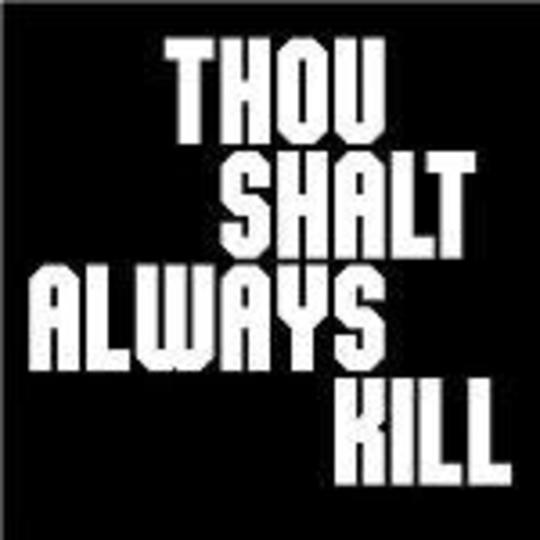 “Thou shall not watch _Hollyoaks”…_ what? What the fuck else am I meant to do on Sunday mornings while chowing down on cheesy beans on toast – mixed herbs, optional – and nursing something of a foggy head following the, sadly inevitable, x-amount-of tinned lagers and pints of ale consumed the previous evening. I am not settling for Something For The Weekend: that Tim Lovejoy, there’s something about his eyes… vaguely vampiric… like he’d rather bleed Helen Chamberlain dry than go at her in a Nuts-approved manner. Yeah.

But I’m digressing from the point at hand, the point at hand being a hip-hop-styled list-a-load-of-things offering – i.e. a novelty single however you dress it up otherwise – that’s, basically, Baz Luhrmann’s 1999 hit ‘Everybody’s Free (To Wear Sunscreen)’ for beat-freaks. The more chin-stroking among you might compare ‘Thou Shalt Always Kill’ to LCD Soundsystem’s ‘Losing My Edge’ single of 2002; whatever you choose to reference, this has been done before.

Although its title is provocative, few lyrics on this collaboration ‘tween bearded poet Scroobius Pip and producer Dan Le Sac are anything but lightly titilating – sure, referring to The Clash as “just a band” (and Radiohead, and Oasis, and The Beatles, et cetera...) is sure to stir up some fire in the bellies of pathetically ghettoised NME-target-audience indie kids, but beyond this poking fun at an obvious some there’s nowt here to get one’s knickers in a twist over.

Occasionally Mr Pip gets political –_ “thou shalt not buy Coca-Cola products, thou shalt not buy Nestle products” – but these references are bleeped out on the radio edit (why?), leaving just that lengthy band-after-band tirade to ruffle the feathers of FM-tuned office workers and evening listeners (Zane Lowe is over this like mumps on an unimmunised infant). Flashes of humour – _“thou shalt not question Stephen Fry”; “thou shalt not wish your girlfriend was a freak like me” – do go some way towards balancing out the purposefully annoying bleeps ‘n’ basic beats that comprise Dan Le Sac’s instrumental backdrop, but there is no way that anyone with half a brain could regard this as anything other than a novelty hit, albeit one a good few rungs up the quality ladder from Crazy Frog and its primarily seasonal cronies.

_“Thou shalt not stop liking a band just because they have become popular,” _instructs Pip early on – on form like this, it’s unlikely he and Le Sac are going to lose a significant percentage of their fanbase anytime soon. And I sure as shit am not gonna stop getting my omnibus fix.

Love Is All at Cargo, London, Thu 15 Mar