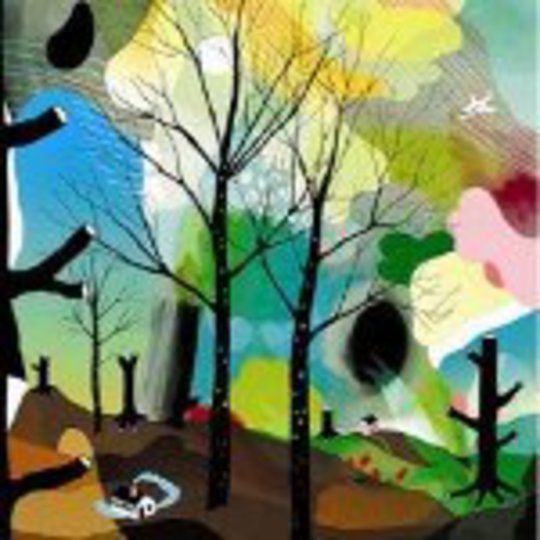 It’s oddly tough to type with a lump in your throat, sometimes, like the welling of an emotion desperate to explode funnels down to fingertips and blocks the thought process from grey matter to touch-typing digits. It’s tough to inverted-commas pen precise feelings about a record – be they objective or, as is more likely, entirely subjective – when said record stirs such myriad tingles and shivers within one’s soul, rippling sensations within enough to render the most professional of critics flummoxed into on-paper silence. This intro is a testament to the immense power of Danish quintet Efterklang, to their ability to leave the reviewer helpless to dissect their work in a formulaic fashion. There’s no succinct summarisation in this first paragraph followed by a neat expansion for another and concluded with a by-numbers wrap. Efterklang don’t work in such a hard-facts fashion, and no critique of their work should be a recycled press release.

This is music with a mechanical heart but the softest skin locking its secrets inside; music that drifts cloud-like through the bluest skies of your mind’s eye, silhouetted migrations and distant windmills blurring at the periphery of vision stained by tears of joy. It’s cinematic yet incredibly intimate, widescreen yet condensed to the size of your mobile phone, available to view on YouTube or your own Tube journey home. Let Under Giant Trees envelope you in such an environment and expect figures bustling and bruising shoulders beside you, above and below you, to disappear like mist once the sun burns it from the earth outside your condensation-trickling windowpane. Lets its spindly vines wrap around you, its robotic limbs to clasp you tight to a chest pulsing with a proud heart. Let its beauty – quite impossible to place in specific comparison terms but affecting like many other masters of orchestral ambience – wash over you like the lapping waves of the warmest sea never captured by Hollywood.

There are five tracks – five different compositions – here, but don’t be fooled into assuming they’re not born of the same beast and suckled by parallel teats: Efterklang have mastered the art of coherency, of cohesion; these songs flow like molten lava through the thickest forest, absorbing and consuming everything before them, purifying inch by inch. Destruction and rebirth: everything’s circular and that same is true of this pre-album mini-album-cum-EP (call it what you will – once you hear it, Under Giant Trees’ status as just a record will be null and void), as the concluding ‘Jojo’ directs the listener right back to the beginning, ‘Falling Horses’.

This is magical, all scintillating interstellar sparkles and the bubbling up of glorious geysers of sound; it’s a recording to ice the heart and keep it still for a full half-hour, those experiencing it for the first time likely to set personal bests for breath-holding. It creaks with aged weariness and blossoms brilliantly; it is alien yet welcoming, otherworldly yet on your doorstep wearing a bright smile. It’s music to witness the dawning of new ages and the end of days as we know them, music to lose all perspective on and to fall into like a first love.

The Man Next Door