All This Could Kill You 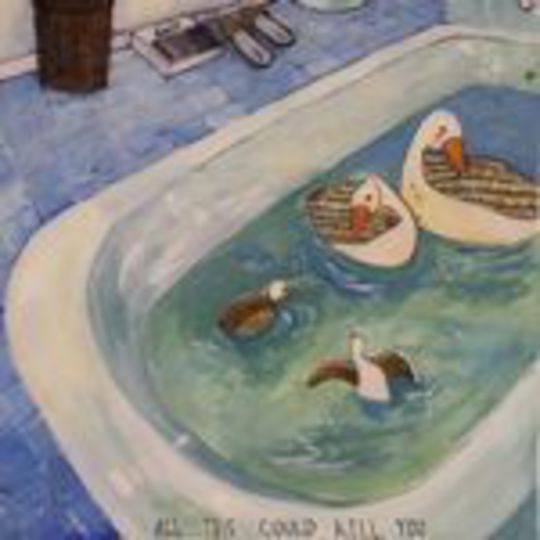 It's only after repeated listens that the magic of All This Could Kill You begins to make itself known. Ben & Vesper's trade appears initially to be in slightly woozy, sub-Smog acoustic balladry, but after you've hit those magic repetitions a sprawling world of exploration and subtle innovation becomes visible on the horizon. There are untapped lines of wobbling accordion, oddly punctuated percussion phrases that out-shape any normal parameters and frankly home-honed lyrics that speak of domesticity and destruction in equal measure.

'The Stomach' balances these weirdities perfectly, with Ben's lugubrious crooning of "the heavy hand of the multi-tasker's union" offset by his calming assertion that "the old world will be shat on". And all to a Neil Hannon-esque whistle (courtesy of Sufjan Stevens, no less) and accordion refrain that ghosts in and out of focus with expert execution. This is the sound of the quietest revolutionary thought possible, knowing truths that, while a little obvious, are just as poetically potent as anything made by much louder exhibitionists.

Don’t think for a moment that All This Could Kill You is a depressingly ‘aware’ affair, though. Listen to the sweetness of 'Nite Walker' and the blanket-like warmth of its sentiment. Ignore the fact that it starts with the hilariously out-of-place line "Dude, I already love you" and just appreciate the reasons for why anyone would say it. Brazen and slightly doe-eyed emoting seems to be a symptom of the familial and wonderfully collaborative atmosphere within this record. Ben & Vesper share not only a bond of marriage, but the singing and artwork duties here. Daniel Smith of Danielson and his wife recorded the piece and knitted. Sufjan Stevens played banjo and whistled. It's nice, all this, isn't it?

When the finished article is one so imbued with these positive elements, it seems only to add spice to include the lyrical and thematic difficulties that the songs do so effortlessly. This record will probably not set the world and its heart ablaze with acclaim and adoration, but it certainly should do. If everyone could express themselves so clearly and with such dignity, this high a watermark would seem somewhat redundant. As things stand, Ben & Vesper are a rare talent with a record full of rare qualities.

Band of Horses at King's Cross Scala, Islington, Tue 22 May