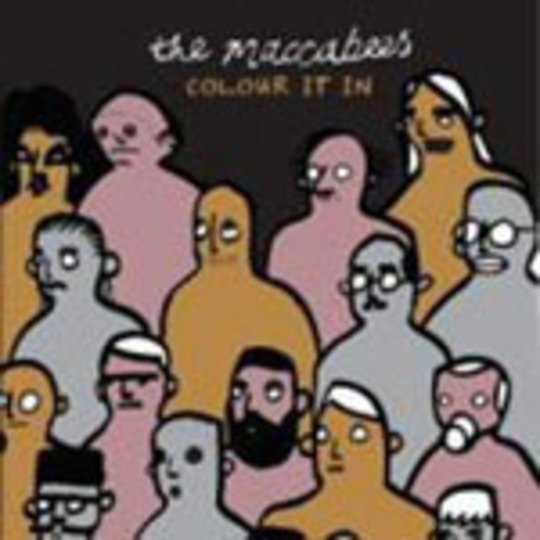 It’s been coming for a while, you feel. Ever since The Maccabees released debut single ‘X-Ray’ into the dark days of November 2005, they’ve been marked by many as a band to watch; understandable, given the quality of their entrance music. Now near enough 18 months have passed, the debut album’s done, and their songs are more likely to find themselves filling the Astoria than throatboy Orlando Weeks’ Clapham bedroom.

The venue upgrade’s deserved, though – every song on Colour It In sounds like a single aside, perhaps, from the none-more-tender ditties that bookend the album, (‘Good Old Bill’, ‘Toothpaste Kisses’). This is why lots of you will have heard half the record already, through 7”s, double As and radio play, and many more will be familiar with a sound that spins and kicks similar to others that have bruk recent into the top 40.

High on treble, taut and revelling in its own tension, The Maccabees’ is a sound that takes its cue from exponents of post-punk more modern than those resting in the pages of Rip It Up And Start Again. Surely I don’t have to name names? It feels like grassing. ‘Latchmere’, ‘All In Your Rows’, ‘Precious Time’, ‘Happy Faces’, ‘Lego’. There are some names worth remembering, a task only made easier ‘cause they all speak with the same mother tongue.

Wipe the sweat from your top lip. This particular gang o’ four (erm, five? – Ed) work to craft builds and drops that should sound as hackneyed as the phrase ‘dizzying highs and terrifying lows’ but somehow just sweep you clean off your feet. The music is agile, fluid, rather than stuck in rock staccato; flying from verse to chorus without a pause to draw breath or drag from taxed cigarette.

Drum and bass interlock to the extent that it sounds like it’s the low frequencies keeping the hi-hats rattling, while brothers Hugo and Felix White apparently have an understanding that allows them to pull together really fucking tight; dual guitars stabbing like pins and needles through the sore sides of your rib cage.

It’s this mob-driven momentum, as well as the humanity dripping from the tonsils of their singer, that sets The Maccabees apart and above their peers. With a lyrical worldview falling somewhere between Ferris Bueller... and Gregory’s Girl, Weeks sounds like a schoolboy who's been dismantled by love and who’s now in the process of putting himself back together again.

So yes, he does sometimes sound like a bit of a pussy, but then so do you, and you, and you, sometimes. What’s important is that you know his woe is real and that he dealt with it by joining a band and writing a great British pop album rather than blowing all his money on drugs and shoes.