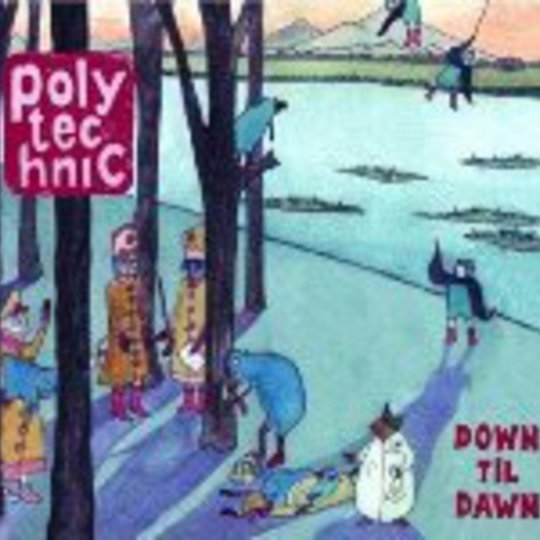 When the elements you perceive a band to have are listed out in front of you, it can make shocking reading when it simply doesn't sound like what you thought it did. The pop melodies of early Supergrass, the swaggering faux-crap aesthetic of early Pavement, the jangly Manc idiocy of early Primal Scream… none of these tenets are really all that noticeable in the long run. Where Polytechnic's debut is strongest is in the way they obscure these sounds and make them golden on their own terms.

The thrust of 'Rain Check' comes across initially as pure Malkmus-ian finger-spazzing, but soon develops into something a little bleaker, more pleading than Pavement were prepared to be. It seems the emotional legs of the song are made more from singer Dylan Giles' anguished and strangled vocals rather than anything so traditional as lyrics (which are, incidentally, as confusing as they are vaguely image-laden). While not as bracing and immediately shocking as the pop heritage they so often reference, there are enough elaborate guitar weaves to warrant the sometimes slight payoff we receive.

Following suit, there is evidence of indie-pop dot-to-dot in terms of the tricks they use on Down Til Dawn (you can't swing a cat for handclaps and 'wooh-wooh' harmonies), but when they're combined quite so sweetly with subtle dents in the mould, it feels more like the homecoming of something we know after some time in the wilderness. Indeed, the intrusive bassline during the chorus of 'Still Spinning' cleverly takes the focus away from what is actually of rather gorgeous melodic interest. We know what we're hearing, but we also like that we’re being asked to hear it in an alien way. This, this is healthy.

It is, of course, utterly conceivable that this record could have been written with some members of Cast about ten years ago, mixed by Ian Broudie and then sold as some sort of Northern Wunderkind package, but this should not detract from the fact that Polytechnic have more know-how than most. And by 'most', one could infer their previous stadium-touring partners Keane, with whom they share an ill-making supports-miles-better-than-headliners relationship. The biggest justice of all would be to see the MEN empty by three-quarters after the support slot, but then we'd see Polytechnic become a spoiled bunch. They are better where they are, safely undiscovered and yielding far greater rewards and respect than most they share a stage with.