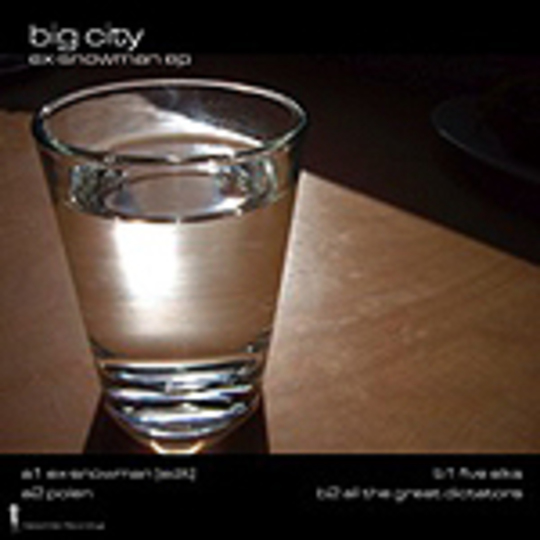 Hey kids! Summer's almost here! You wouldn't know it, what with it being bloody freezing outside at the time of writing, but what the hell - at some point you are going to need some summer music. You know, some lightweight, upbeat and jaunty indie you can imagine playing while you bake in the sun at your local park. Music that's awash with lush, jangly guitars, smooth vocals perhaps an organ or two and some slide-work on a couple of fretboards. Well, look no further: Big City may be just the band you're looking for.

This isn't a slight, by way; the fact that Big City aim for something lush and upbeat and end up with results that don't sound disgustingly mawkish or unbearably twee shows they know what they're doing.'Ex-Snowman' opens the EP, with organs that sound off-centre with the rest of the rhythm section, but somehow seem to work anyway. Then the track switches into a relaxed, cheery number which glides along at a toe-tapping pace. The two b-sides fair pretty well, too. 'Polen' is an acoustic-led rock number, which sounds more focused, the drums and bass more prominent in the mix, and 'Five Elks' trades on angular guitars and pychedelic keys, while the vocals waft at the center of the mix - sounding all for the world like an updated version of The Byrds.

The lyrics are slightly mushy, but the singer's delivery sells it anyway. The band's bio doesn't identify whether Javi or Miguel are responsible for lead vocals, but whoever it is, their voice is perfect for the material; imagine Mark E Everett from Eels without a care in the world, and you're starting to get the picture.

If this slice of psychedelic pop is anything to go by, Big City may be worth keeping an eye out for. This is not to say this band will ever conquer the world (unless one of their songs soundtracks a tragic event on an episode of The O.C. or something), but if their forthcoming full-length lives up to the promise of this EP, it'd be a shame if more people didn't pick up a copy.

Love Is All at Cargo, London, Thu 15 Mar