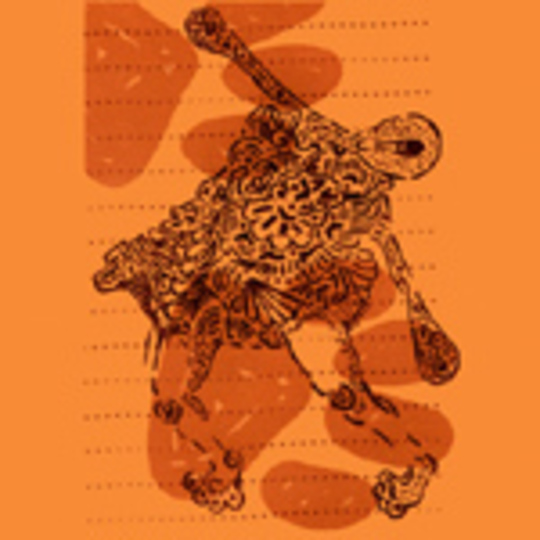 Remember when you first start to read proper books? When you left Puddle Lane behind and began to realise the full multi-coloured wonder of fiction.

And remember the first time you read a Roald Dahl book? My first was Fantastic Mr Fox; so good I read it over and over until I found The Twits and then Matilda. 1990’s Esio Trot was always an underrated pleasure, the story of a not-really growing tortoise that brought childish glee to many a young bookworm.

And so it's with the same childish glee that we encounter Brighton's Esiotrot, a seven-piece part of the multi-legged and complicated southeast label/collective Mentalist Association. They make music that sounds like it’s played out sepia tinged montages of days out on the beach at, say, Eastbourne. And that’s a good thing.

For a practically hand-made semi-self-release, Schmesiotrot is a pleasure. It comes with six interchangeable covers that you can swap depending on mood - as long as your mood is Terror-Twilight-era Pavement or Hefner-esque whimsy. The effort and love isn't just contained in the packaging. The album is 13 vignettes of a semi-charmed life in a quaint kind of Britain that doesn't quite, as much as we wish it would, exist.

“I wish you'd stop going for stupid pretty boys who treat you like shit, and don't know as much about music as you do.”

Although cool enough to feature in this month's Dazed & Confused, Esiotrot are a brilliant outsider's band. Well, not outsiders as such, but more the reliable friend who gets turned to for advice when all he really wants to do is turn the lights off and get naked. Something singer Matthew Rains makes clear on the fantastically jaunty 'There'll Be A Time For Nice Guys' when he despairs, “I can’t believe you’d rather date a man with a skateboard than spend time with me”.

The outsider theme continues, and although the Smiths aren't an obvious musical reference the outsider love of SP Morrissey permeates Schmesiotrot's being. Closer 'Bleach On My Fingers’ even opens with the line “Meat is murder and murder is me and you”.

It's not all about girls, though. 'Frankenflower' is the story of a two-headed daffodil (a freak of nature, but still beautiful) and 'Darren' features the tale of the eponymous 15-to-1 contestant who punches William G Stewart in frustration after an early exit. There's a wit and charm that's just not evident enough in mainstream guitar music.

But as well as being a better-than-functional indie-pop band, full of bouncing staccato guitar lines and self-deprecating lines about pretty life models, the south-coaster's ace in the pack is a three-piece brass section. Brass, when used well (and it rarely is) can make a good song into what Mark Nicholas might call a “right little ripper”.

Opener 'Marianne', the sound of an indecisive sunny day with Your Girl Friday, has its whole guts underlined with a chirping brass line - it's just a pleasure to listen to. Close your eyes and you can see the soft-focused memories in your head. 'Tight White Shorts', again, is enveloped by tumbling brass that sounds like a colliery mine band that's had too much of its post-Thatcher Prozac.

Schmesiotrot is a love letter to loves lost. Yes, at times it feels like you could pick the music out of the air and break it in your hands, but god knows we need more bands versed in the delicate art of Quiet. “I don’t mind what we do, as long as it’s together” they sing on 'Marianne'. We know the feeling.