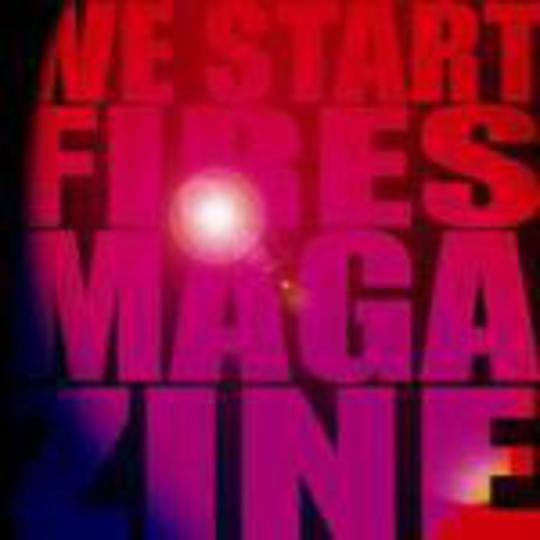 We Start Fires are releasing an album soon – and what better way to celebrate the impending release of an album than with the immediate release of a single? Why, there could be no better plan!

Hence ‘Magazine’, released through Hot Noise and boasting a cover both pink and interstellar. Which is actually quite apt, as the noises contained within it do fall somewhere between cosmic noise and shocking pink pop glory…

I don’t think I can push that analogy any further, so I’m going to abandon it before somebody gets hurt. But it is true, you know! This record does take searing high-speed keyboard effects (which occasionally morph into classical-piano-effect runs, just for kicks) and a sense of high-octane punk energy and shouty lyrics and weld them to a jerky rhythm and descending notes that make for a kind of whirlpool of noise. And it does do this while hanging on to a catchy tunefulness that allows this to be surprising and forceful without ever abandoning the idea of rock music being great fun.

And then there’s a really cool remix with loads of laser-feedback effects. And the remix is of an entirely different We Start Fires tune (namely ‘Blackout’), so it doesn’t leave you feeling like you paid for two songs and only got one and a third.

And the whole mixture of fundamental rock energy and nuclear sound-effects dressing makes for a really quite remarkable whole. Hurrah – once again – for We Start Fires.