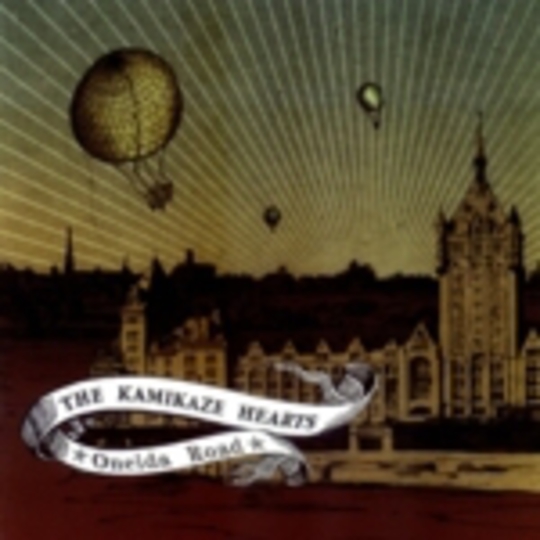 Aaaah, to see the open road before me and feel the breeze in my hair, as the rolling hills of somewhere in America I’ve never been to stream by past the wound-down window of my beaten-up ride and I long to hold my darling Charlene. Or was it Amy? I don’t know: it was late and I don’t hear so well these days, and us alt-country types aren’t so handy with names after the first seven or fifteen bottles.

But my pretend days of rollin’ along to the lo-fi sound of The Mountain Goats have come under threat recently from a new bunch of cowboys. They call themselves The Kamikaze Hearts, and their debut album Oneida Road is a slice of life delivered from a front porch just outside Albany at dusk. Five in number, the ‘Hearts weave soft tales of both security (“no-one locks their doors up here and no-one feels the need / and all night their key chains hang from their ignitions”) and a desire for something more (“we’re talking in the car about the good things we’ll have in the end / but today you’re weeping”) armed with mandolins and a good ear for a harmony.

Whilst this is all standard fare for the genre, Oneida Road finds strength in depth. This is primarily down to the songwriting – no two songs feel the same, each a different combination of loneliness and hope – and also the presence of two vocalists, Troy Pohl and Gavin Richard, with two different approaches: one has the drawl of your stereotypical country musician for those lonely moments, whilst the other is armed with a delivery much like John Darnielle of The Mountain Goats for those life-assessing moments, where a cutting thought is never far away.

And then there's the depth which comes from the dark moments. Take ‘Guyana Central High School Class Of ’78’ as your example, which at first appears to be little more than a gospel-tinged story, but turns out to be an account of the People’s Temple mass suicide-slash-murder (Wikilink) from the point of view of a follower awaiting his imminent ‘ascension’, told startlingly matter-of-factly without a hint of condemnation. Once it becomes clear what simple lines like “sat back in my folding chair and waited with joy for my new life to begin / tried to keep the children calm” actually mean, and that the gospel delivery is actually a reference to cult leader Jim Jones appointing himself as Reverend, the song's true nature is revealed, and would probably be a highlight if only it didn’t outstay its welcome at nearly ten minutes long.

Listening to Oneida Road is like a 40-minute holiday to a simpler place, full of people whose lives probably aren’t going anywhere – as is frequently inferred during the duration – but they’re content nonetheless. Just make sure you’re indoors come nightfall.