The Death of Nightlife 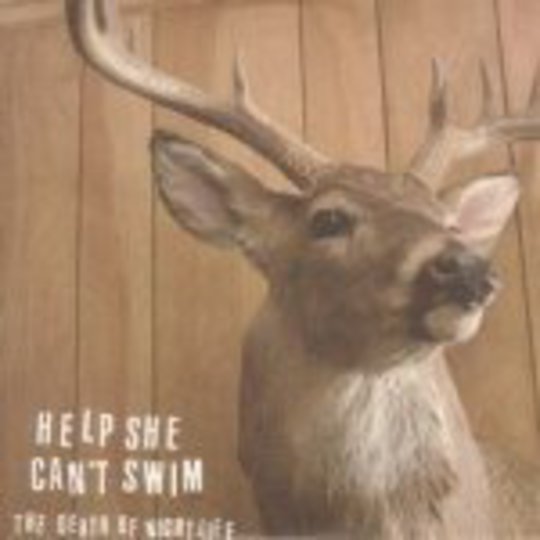 Strangely, given the title of this record, the opening 'Pass The Hat Around' on Help She Can’t Swim's latest is entirely evocative of a middle-England indie disco circa 1999. You know the sort. You'd probably have drunk about six Jack and Cokes and be dancing like a spazzy English student to Idlewild when they were good. Truth be told, it's a lot more, err, prog than the bang-thrash we're used to from these three boys and one girl. Weird, that.

Happily, it's back to business as usual by the time we get to 'Idle Chatter', which features a demented keyboard fizzling that wouldn't sound out of place on the last An Albatross record. It's nice to be reliable. Indeed, we don't see any more departures from the worn (but not unwelcome) template of quite the magnitude of the opening, but we do get some brilliantly spacey touches lurking underneath all that falling over and having fits. Listen to the completely ace plinks of candy-sweet keyboard bobbing like buoys against the wire guitars on single 'Midnight Garden'. It's all a tad more considered than 2004's Fashionista Dance Troupe.

Next, observe how much Help She Can't Swim have calmed down. They are still quite, quite punishing on 'Just Be Social' in particular, but they've learnt the rather vital pop trick of playing that off against shocking patches of calm. The contoured guitar lines of 'Dragged Under A Wave' are exemplary of a new-found clutching of the pop rulebook, but still dirty enough to still be seen biting the edges off the cover. Listen also to how much Leesey Francis' delirious squeals have been reigned in and morphed into a more decipherable caterwaul. This is in no way a compromise in authenticity, merely a sensible step towards clarity.

So that comparison to Idlewild isn't quite so stupid after all, is it? Clear things up a bit on your second record, listen to pop music a bit more, remember that you're still ugly-fun music and then dance about like a dick. You'll be alright, you mark my words. Steer clear of folk-pop though, it's just not for you.