Impressionist Road Map Of The West 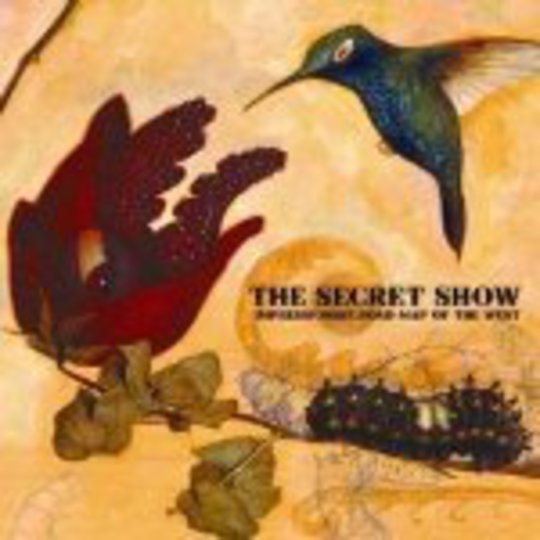 In the world of popular music, there aren’t many things more liable to send the listener into a fit of cold sweats than the prospect of a noisy rocker turning their hand to a more sensitive side-project. The concept conjures up harrowing images of hoary old axe-wielders curled over-earnestly around an acoustic guitar, convinced their watered-down tedium somehow elevates them to the level of serious musician. Of course, Funeral For A Friend frontman Matthew Davies is no hoary old rocker, yet still it's with a certain amount of trepidation that we contemplate his country band, The Secret Show.

However, the initial impression is one of pleasant surprise, not only because of the quality of the tunes but also due to the persuasiveness of the country stylings. ‘Lovers’ serves as a solid, if slightly unspectacular, opening gambit, before the record quickly hits a peak with the fantastic ‘Two Drowned Rats In The Desert’. It’s a true tearjerker, utterly convincing in both sentiment and execution. This is thanks in no small part to the auxiliary vocals of Lianne Francis, whose Laura Cantrell-ish tones lend the whole project a great deal of credibility. And the standard is maintained for tracks three and four, the jaunty, mid-paced ‘The Girl From Chapel Hill’ and the upbeat stomp of ‘We Blaze A Trail’.

However, the album’s miserable title track – consisting solely of Davies’ vocals and acoustic guitar – is a real spanner in the works, a stumbling block from which the record never really recovers. Sounding better suited to a Funeral For A Friend B-side, it lacks inspiration, quashing the excitement the first four tracks have built up and heralding a significant dip in quality. The songs that follow suffer badly in comparison to the record’s promising opening salvo – ‘The Duke’ feels like an unnecessary rehashing of ‘Two Drowned Rats…’, ‘Manana’ is drab and utterly disposable, and by the time we reach ‘The Widow’ it’s all getting rather tiresome indeed. So much so, in fact, that the mournful yet spirited ninth track, ‘Old Blacktop’, feels like a glorious, life-saving mouthful of oxygen after an overlong spell underwater. It’s by no means a classic, but it’s a definite step in the right direction.

The moody ‘Everyone’s A Critic’ serves as a decent climax, while closing cut ‘The One That I Love’ feels much more like an added bonus track, its muffled production lending it the quality of a discovery from a long-forgotten corner of a cobweb-ridden attic.

_Impressionist Road Map… _, then, is certainly stretched beyond its limits, containing more than its fair share of filler. It's a shame, because on the whole the record has a great sound, and there are enough strong songs to have made an impressive EP or mini-album. As it is, this full-length release can only be considered a qualified success.