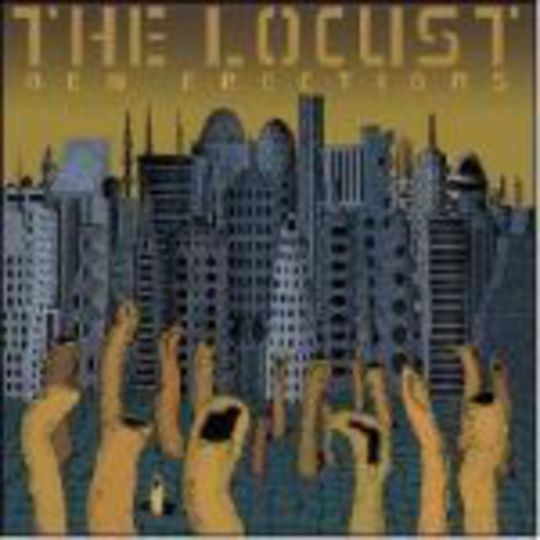 The first striking aspect of The Locust’s follow-up to 2003’s rightfully revered Plague Soundscapes LP – 10/10 in NME, believe it or not – is that you can understand the vocals. Really: opener ‘Aotkpta’ sounds like Boris fucking around with Californian accents and cutting their song lengths into quarters. The lyric book isn’t at all necessary for even the most wet-behind-the-ears of newcomers to this freak-rock collective to understand what’s being screamed through pig-shit-thick swamp water and pea-soup smog: “We’ll bury this city in trash”.

But The Locust have always been noted for their alarming musical turns – just as soon as the listener’s settled into something relatively easy listening, given the band in question’s past, ‘We Have Reached An Official Verdict: Nobody Gives A Shit’ shows up, all dragonfly shrieks and Transformers death, and tips a few buckets of aural horseshit all over the place. A minute and 22 seconds after it arrived, it’s gone, but again don’t get comfortable: this isn’t an album of rapid-fire seizures a la its predecessor. You’d go so far, in fact, to say that The Locust have excelled themselves on New Erections: they’ve written ‘proper’ songs.

Of course, the ridiculous is still fantastically realised and brutally executed: the blink and you’ll miss it fit of fucked-up foaming-at-the-mouth franticness that is ‘Full Frontal Obscurity’ is terribly comic and completely terrifying in equal measures. Vocals snake about each other while drums slow, gradually, over a minute-something of sweaty sludge-core camped up with Rocky Horror histrionics. ‘Scavenger, Invader’, meanwhile, isn’t a song by any stretch of the definition: it’s an inhuman grind, the sound of Terminator’s killer robots achieving their goal of global conquest, throughout the ages.

But those ‘proper’ songs, they remain the USP here. After all, as acclaimed as The Locust are, they’ve spawned copycats enough to render their once-acerbic three-fingers-in-the-ass assault on the senses something of a so-so experience from time to time (particularly live). They had to change, evolve; they had to leave the pretenders where they belong, in their litter and blood and body parts-strewn wake. And with New Erections they might just have managed it. It won’t sate the appetites of those wanting nothing but devastation, but anyone approaching The Locust’s new(ish) direction with an open mind is certain to be rewarded.