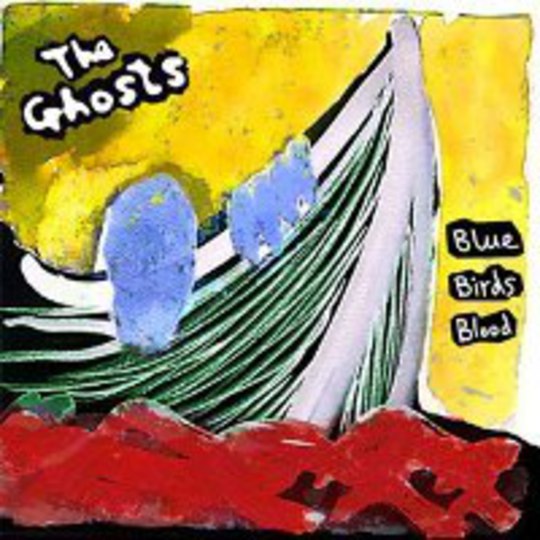 It's not immediately obvious, but something is bothering Blue Birds Blood. There's a seed of something wrong gnawing and nagging just below the surface, tangling nerves and pestering your stomach to get rid like a sailor bailing out a leaky life raft. It's fine above board - the mood is dreamy and softened by alcohol, with reverb to match - and the ballroom band plays on, seemingly oblivious.

Except they're not: at least one member is aware of the liquid death slowly creeping up from below deck. It's like someone's had an anxious word in the singer's ear just as he's about to amble into the first track, but for now he's bravely elected to keep quiet and let his set unravel as has been suggested, serenading the passengers while the doors to the ballroom are locked and until the vessel concedes enough nautical feet to cripple it.

Let's take album opener 'Penny Falls' as a case in point - it starts comfortably enough, acoustic guitar lazily tripping through four notes, just about distracted. But then the vocals arrive and the song actually shivers, like its skin has been touched and softly broken. "Push it in and pull it out, wanna be where nothing hurts at all". In itself no new sentiment, but when sung like it is here the hairs on the back of your neck stand up in earshot of such weary resignation.

And this is where the record's charm arises from. Mathew Sawyer's otherworldly yowling is what's hurting this beautifully bruised record, giving you the voyeuristic joys of masochism in real-time. When he sings, for example, on 'So So Glad You Could Come', he sounds like he's politely welcoming guests to an evening soiree with an axe sticking out of his face. "Stand up knowing that there's something in your head... stand up if it wants you dead _[then, weakly] ooooh."_ The barely-stifled pain that follows him to the heart of every song makes it sound like he's braving a recent death in the family, and for some reason this is funny - probably tickling the same part of my insides that gives me the giggles I have to stifle at funerals.

The majority of the record continues in the same vein - delicate melodies drenched in reverb, sweet sentiments sung not by some professionally trained, toned, tanned lothario, but by an everyday oddball with a wobbly throat. This should immediately provide an answer for the question: "Is there a place in today's music scene for MS&TG?" Yes. And stop talking in acronyms.

Sawyer has that rare ability, like Television Personality Daniel Treacy before him, of writing songs that sound like they were written for the prettiest girl in your year at school, who had little confidence and fewer friends and whose words got lost in her train tracks. Appropriately for an album of such compact, well-formed pop, it's in the small touches that this is most evident - the mumbled "No thanks" in 'Don't Want To Hang Around' and the strange love gurgles hidden in the lining of 'Love Will Come To Town'. Add these up and it becomes clear that* The Ghosts *have made a record that is startlingly human. The pervasive air of calm desperation in evidence makes it transmit like a soundtrack to lives that run on having skipped their tracks, regardless of whether those tracks are for trains or braces. And when you give him song titles like 'Paris In The Spring' then, well, you know you're onto a winner.

The aptly named 'Heartbreaker' is another stunning example of this, punctuated as it is with piercing damsel in distress cries and fraught stabs of string nicked from Jaws. It's the most ferocious track on Blue Birds Blood, until the chorus cuts in, derails the clattering brilliantly, and throats and violins can relax in the sunlight for a few seconds. The effect in the meantime is of someone quietly staggering along, knifing themselves in the heart. Like Michael Myers seduced by Pauline Lewis, it's a signal of intent from the house band of wounded memory, playing the songs that lurk quietly between the beams of sepia-drenched attics and the buried pages of musical photo albums, scratched black-and-white film reels of women untied from railway lines.

As it was I found Mathew Sawyer's Ghosts not in some forgotten loft space, but in the smoky cellar of the Buffalo Bar, at the corner of Holloway Road and Upper Street. Playing at 'The UK anti-folk (almost) Summer Solstice' back in June, it was the first time I had seen Mathew Sawyer onstage since he played drums for TV Personalities' car-crash comeback at the Barfly last March. Thrust to the front of the boards, he showed he could be trusted to provide the sort of songs that used to be meat and drink to Treacy, but even that gig couldn't hint at what he'd produce here. Blue Birds Blood is a forgotten box of cobwebbed pop tinder, its songs waiting loyally for the noisy tumble of shrapnel through the rusted guts of old penny slot machines. Get it and treasure it.

P.S: All these words and I haven't even mentioned _'Dont Ever Die Johnny'...a travesty. Its stark, harrowing lilting makes for a song which is worth a million Coldplays or Snow Patrols, and could conceivably draw tears from St Paul's._

Don't Be A Doctor

You Are One Of The Few Outsiders Who Really Understands Us