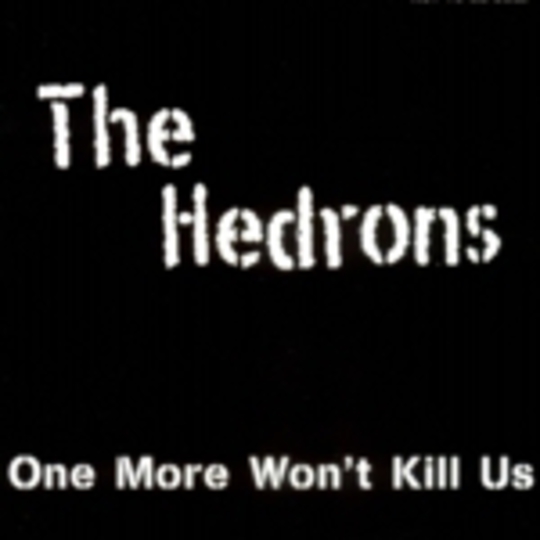 If you see anything proclaiming The Hedrons to be indie-punk, don’t believe it. I picked this up on the off-chance that it might be an all-girl equivalent of Idlewild’s Hope Is Important, or something at least equal to The Distillers. It is not.

Instead, One More Won’t Kill Us is more pop than punk, more like industry pretenders The Like than the sadly defunct Sleater-Kinney and, crucially, without much lasting impression. With one exception, each song sounds like the last: one guitar plays lead whilst one hits power chords, most songs share the same tempo and each time the backline threatens to drown out sweet-voiced vocalist Tippi.

“Don’t pretend that you don’t like my bad charm,” she sings on ‘Bad Charm’, despite rarely coming across as having anything other than good intentions, but on the one instance where she does get going, the whole thing makes a lot more sense. ‘Couldn’t Leave Her Alone’ is the one song which bears repeated listens after the sugary harmonies give way to a straining, throaty Dalle-esque yell and, for three minutes, The Hedrons sound a little more alive. Tippi croaks “she can beg for the bones” and BAM!, the pop princess becomes grrl-rock's number one threatening seductress for all of two seconds.

But in its wake the rest of the album sounds even more frustrating. It’s like being taken to an alternate dimension and shown how this album could have turned out, but then being cruelly returned to a land lacking purpose; the elaborate guitar solos and no-nonsense lyrics sounding suspiciously like someone, somewhere, joining some dots. I can think of only one way to illustrate this.

Have you seen Josie and the Pussycats? That surprisingly successful tale of an all-girl pop band, where they’re generally nice-as-pie and some of the songs are written by the guy from Fountains of Wayne? In it, there’s a token punk song where they all snarl and the words are tough, and that’s what this is. Through all of their tales of standing up and fighting, there are enough “wuh-uh-uh”s and simple rhymes to keep it more girl band than grrrl band. Not that pop’s a bad thing, but the constant contradiction leaves a messy end result.

There’s the slightest glimmer of hope in here for the future, and it’s hardly a crime against music at a time when the FHM High Street Honeys can reach the heady heights of the Top 40. It’s still not good, though.