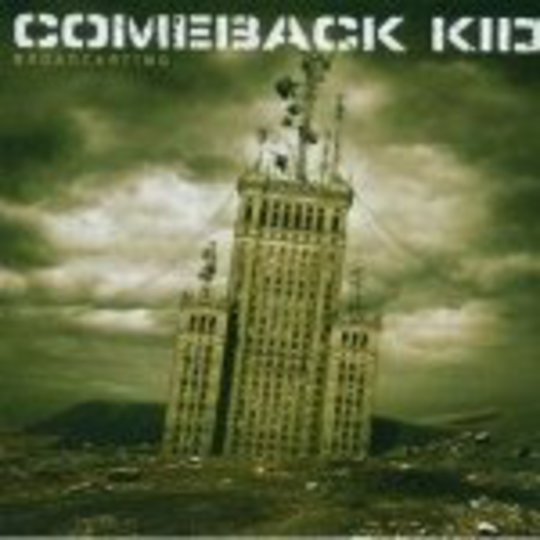 Whatever happened to the word hardcore? It used to be such a cool word to drop; spawning images of Black Flag, Minor Threat, Gorilla Biscuits and all the greats that preceded its descent into quasi-melodic metal with the odd punk power chord. Now it’s this John Belushi of its former self; bloated, mal-aligned and a bit shit really. Contrary to all this, I look forward to hearing each and every ‘hardcore’ record. Not as a masochistic form of self punishment – I’ve got K-Fed’s wretch-inducing effort for that – but for the slightest of chance that I may stumble upon a return to form that might awaken the genre from its piss addled grave. Or something.

Alas, despite Comeback Kid’s impeccable credentials, Broadcasting fails to deliver the spine shattering return I crave. But that is not to say this is not, at the very least, an extremely accomplished album full of quality songwriting and gravely voiced theatrics that may act as a stepping stone to turn your average Taking Back Sunday fan onto better things. It’s just a bit bland and predictable.

Following the departure of singer Scott Wade on good terms last year, CBK founder Andrew Neufeld has stepped up to the plate. As vocalist of the much venerated Figure Four, he was never really going to do much wrong. Screaming aside, the remainder elements of this album our decidedly average. Like being invited for a threesome, only to find it’s the kind where you run the risk of crossing swords. Not ideal, but you can live with it. There are, however, far better things out there than this. Any Rise Against effort, or that of Bane – who Andrew has clearly modelled his vocal delivery on – Every Time I Die, or even their post-hardcore Canadian brethren and tour buddies Alexisonfire.

The prime benefit of Comeback Kid over, say, Gorilla Biscuits: at least you can go and see these guys when they tour this March. It’s better to live for today than to yearn for all that cool old shit your Dad used to skank to when he was your age.