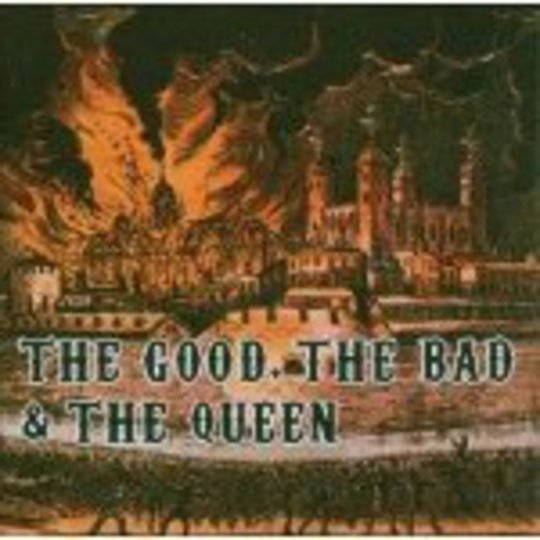 In October DiS reviewed 'Herculean', the debut single taken from Damon Albarn's latest project The Good, The Bad & The Queen. It was very grey, very gloomy and refreshingly restrained, and this writer liked listening to it, because it sounded very much like London looked at the time. The first album from the assembled talents of Messrs Albarn, Allen, Simonon and Tong continues in this wise, weathered vein; plugging away to throw together a meticulous soundscape of the ailing capital.

Like tyre marks scorched into the Westway or absurd graffiti scribbled under the arches of Chiswick Bridge, every man here leaves his mark on the music, in his own way. Drawing on the decades of London experience accumulated by those men, this album performs a rare feat: as the band quickly disappear into the spaces of their own accumulated memory, they manage to track down the city's scuffed heart 'neath layers of re-laid tarmac and gutted litter.

TGTB&TQ stalks into life with the sort of song that respects and learns to revel in the martyrdom of grey days, moored tugboats, muddied puddles. Leaving its creators fiddling through frets and puffing on a Hammond, 'History Song' creeps like you're walking home half-alive through the early hours, a rat back from the lash. It's one of the most direct tracks on the record, before any discernible purpose and narrative is submerged and half-lost in the fumes leaking out from the speakers. Crooked rhythms creak under Albarn's ominous premonition that "If you don't know it now, then you will do" and rim-shots stack up and stagger; 'History Song' sets the band up from the outset as cold voyeurs, detached from the hurried masses.

Throughout the record, lyrics pitch the songs in view of situations that are empty and actions that are isolated and mundane - at the banks of abandoned estuaries, "tide end towns", "the old canal by the gas works", the 1980s. There are more - other tracks find the narrator 'Behind the Sun', "away in the hills", in submarines, "on the scrubs in the night". Every track on the album, in fact, has a reference to one of those places in quotation marks up there, and in every one it sounds like the band is lurking in the shadows that their music casts.

Some shadows are thrown taller than others. The glorious 'Kingdom of Doom' joins 'History Song' in intoxicating like petrol fumes. The way 'Three Changes' rattles along, driven by Tony Allen's drumming, is one of the few moments where the band seem to cut loose from the tight alleys and backstreets they skulk in, while the album's/band's/project's/whatever's title track brings the whole thing to a furious, clattering, ecstatic crescendo. 'Herculean' is still my favourite TGTB&TQ song. Occasionally though, Albarn's alley cat howl starts to grate as it washes over the music like a lukewarm bath. There are times when the tempo starts to lag and sag, too - most notably in the couple of minutes stretched between the closing moments of '80's Life' and the start of 'Northern Whale'. It is in some ways necessary, I suppose, that these songs should suffocate slightly as the quartet toil to faithfully recreate that atmosphere of grey weight.

But for all its momentary highlights, this is a record that doesn't tend to grow on you as much as sink and seep into your skin: and it does this slowly. This is 'cause, to my ears at least, it tends to expand laterally rather than progress along any kind of linear path - every song sounds haunted by the traces of audio scored in by the tracks that preceded it, like oil-slick vapour trails meeting the Thames Barrier and banking up along its horizons.

That said, there are hooks and words that immediately jut out from the fugue - any song whose opening gambit is "Friday night in the Kingdom of Doom/ Ravens fly across the moon," has my ears won, straight up. This song ('Kingdom of Doom') is especially impressive, a jarring knees-up as performed by the cast of Funnybones, interrupted by haunting swirls of white noise and the draughty tinkling of chimes and bells.

These little strikes of ambient noise that colour the record are vital to TGTB&TQ's cause: it isn't rhyme schemes or quick turns of phrase that make the record worthwhile, it’s the way that the band carefully picks up and dusts off those moments that slip through the cracks of sped-up London time and end up lost in the hustle and bustle that makes a city obvious. The devil's in the detail, so to speak. It is with a sense of regret and withering nostalgia gleaned from sound-tracking the places that time forgets every single day that this album is built, and that purpose is fulfilled, if perhaps too rarely surpassed, on The Good, The Bad & The Queen.