Sleep Is For The Week 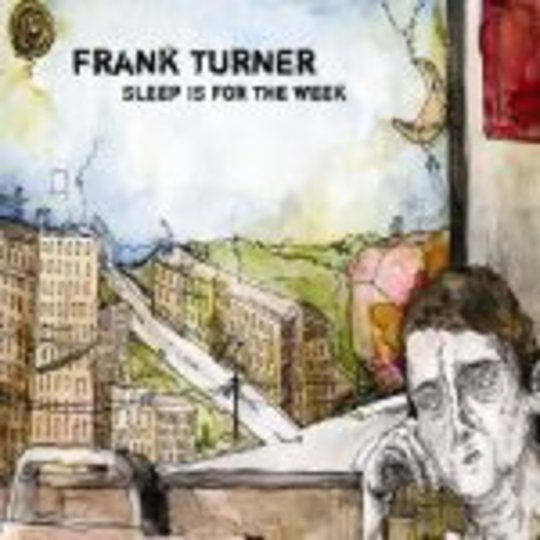 Punk-rockers retiring from rollicking waves of blood and sweat to calmer, folk-stained waters is nothing new: just recently, Bad Religion’s Greg Gaffin made the move from amplified aggression to understated reflection (he’s a doctor too, you know), and more noticeably Sam Duckworth successfully transferred his talents from the hardcore-styled bands of his teenage years to his Get Cape. Wear Cape. Fly solo guise. Now it’s former Million Dead singer Frank Turner’s turn to prove to a cynical listening public that he, too, can adopt a softer vocal tone and strum an acoustic with all the passion evident in his old band’s blistering live performances.

And, for the most part, Sleep Is For The Week is surprisingly good – not surprisingly because there were any doubts about its maker’s potential as a solo artist, because Turner’s always exhibited the sort of self-confidence and carefree attitude synonymous with personal fulfilment, but surprisingly because this record is so well realised and rounded. It doesn’t sound like a debut; it sounds like the work of a man who’s been playing this style of music his entire life. Hardcore? Punk? Traces of neither are present, not at a surface level.

Sleep For The Week is a folk record in a traditional sense: these are songs for sharing, stories for campfires and sleepovers, sentiments of universal affectability with minutely detailed individualistic twists that make them Turner’s own. He doesn’t have the most powerful of voices, but Turner plays to his strengths throughout: clear pronunciation a world away from this month’s most-tipped slur-rappers, a slight sadness – undefined but palpable nevertheless – come the end of many a line, and a tenderness unbecoming of a man who once screamed himself hoarse under burning lights for a living, dodging crowd-surfers night in, night out. The aforementioned Duckworth might hold Billy Bragg up as a hero, but Turner’s made an album more suitable for comparison with the man rightfully recognised as one of the UK’s finest purveyors of modern folk.

Subject matters vary wildly, but not once does one of the album’s thirteen tracks lose touch with the reality that’s become Turner’s most-productive muse. ‘Ladies Of London Town’ tells a tale that most males of Turner’s age can relate to – “There’s so many beautiful girls in here tonight, I can hardly stand it… They never go home with me” – and ‘Father’s Day’ remembers awful self-hacked haircuts and how a teenager’s actions can be deemed irresponsible at the time by a parent, however righteous the alleged wrong-doer of the palaver may feel at the time. The latter ends with another blindsiding statement that packs a punch purely because of its immediate connection to each of us: _“For better or for worse, I am turning into you.” _

A couple of overly-earnest efforts aside, Sleep Is For The Week benefits from excellent consistency and coherency; come the closing ‘The Ballad Of Me And My Friends’ - a live recording featuring gang backing vocals from a wealth of friends, followers and the odd DiS reader (yes, your names are listed) – many an emotion has been evoked, and a bundle of memories have been remembered. Melancholic at times but never irredeemably morose, the record’s shifts in mood are well-managed and the songs perfectly sequenced: ‘A Decent Cup Of Tea’ is crushing in its diary-page frankness – no pun intended – but the very next song’s uplifting arrangement is a well-timed pick-me-up. And so it goes, for thirteen mostly excellent songs, until only one conclusion can be drawn: Sleep Is For The Week really _is_ good. To some that’ll be a surprise; to Turner’s already amassed fan base, it’ll simply consolidate their existing opinion that he’s a star in ascendance.

He does like to wear a very silly hat, though.