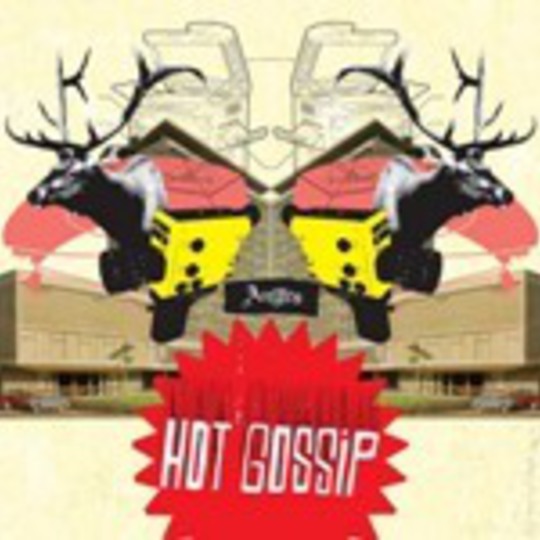 Snaking their hips out of Milan’s grimiest back alleys, Italian trio Hot Gossip are sure to cause a stir on these shores with their dance-punkin’ pop ‘n’ roll, neatly packaged here as their debut album Angles.

Blink-and-you’ll-miss-‘em brief blasts of power-pop-hooked post-punk are matched ounce for ounce in terms of potency by slurry vocals that imply a sense of urgency without ever really making the reason for such a rapid jerking of ones toe tips entirely apparent. It’s all a little derivative of many US acts – think, in particular, Thunderbirds Are Now! and Enon – but any echoes of across-the-sea acts past and present is effortlessly overlooked when the listener is presented with such overwhelming energy.

And it’s this – Hot Gossip’s impossible to temper forcefulness – that proves to be the three-piece’s primary aspect of appeal; their songs flash past so swiftly that only a couple of crunched chords are caught each time, but it’s the speed of delivery that keeps the ears occupied even when details are lost in the blur. Repeat plays produce standouts – ‘(Things Happen) On A Tuesday’ proves to be a moment of relative calm third or fourth time around, and the breather’s welcomed – but at just 30 minutes long in total, it’s unlikely you’ll slot Angles into your stereo without letting it play from beginning to end.

A dancefloor hit-to-be in the homes of the discerning punk-pop-rocker, Angles is a relatively fuss-free frenzy of insatiable beats and dizzyingly delivered rhythms. It’ll engage your feet and leave your brain time to turn off almost totally; that, to this writer at least, equals near-perfect pop fare.