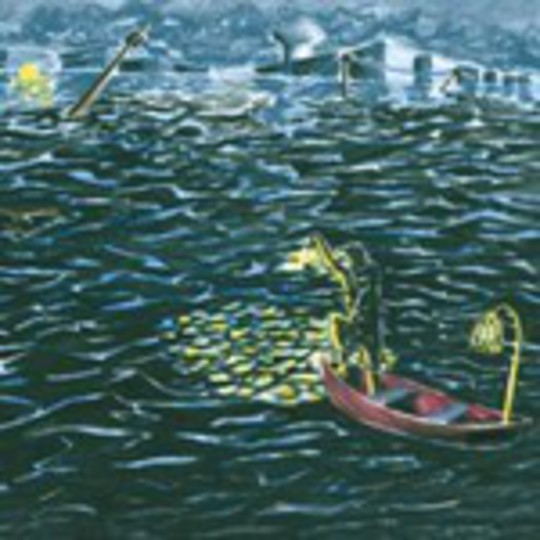 As tired as the post-rock genre is, records like All Of A Sudden I Miss Everyone are keeping the artform alive, if only by a thread as withered and delicate as the soft sections of Explosions In The Sky’s latest. Although the Texas quartet expand on the suffocatingly – albeit deliciously so – uniform motif of previous album The Earth Is Not a Cold Dead Place, All Of A Sudden… unflinchingly holds true to the band’s tradition.

It doesn’t break any padlocks, pick any keyholes or add any new instruments (save the isolated keys on ‘What Do You Go Home To?’), and you’ll be able to recognise the elongated loops and dots of their signature sound in an instant if you’re already a fan. That said, it’s about as consistently lovely as it can be considering the limitations adhered to by both the band and their genre of choice. Most importantly, the group dance around the rise-and-ripple dynamic expertly, never going about their business dispassionately or predictably. And after the still-lingering disappointment of M83’s Before the Dawn Heals Us – which traded the lovely machinated beats of Dead Cities for obnoxious, bloated, cheesedick live drums – I’m perfectly happy settling for an upgrade rather than a complete overhaul.

These boys know how to lasso a listener and slowly, softly, and effortlessly reel their catch in with minimal flipping and flopping. Suffice to say, as soon as opening track ‘The Birth And Death Of The Day’ rubs its eyes and shyly opens them to the world, you’ll be curious as to where EITS will transport you. And you’ll get your answer soon enough, young one: first you’ll be dunked head-first into a sheet of fuzz and wicked sloshes of snare. Then the guitar explosions we’ve all come to know and love begin, the dual six-string salvos tip-toeing around each other with such grace you’ll swear they were born stuck together like siamese twins.

From there Explosions In The Sky use their savvy approach to give us more of what they do best. Most of the songs start with a flutter, work themselves into a resplendent flourish, ease back into a gentle, laying-down-in-a-field-of-warm-poppies trench, then repeat the process. Obviously it’s not always that simple an equation, as All Of A Sudden… is much more redolent of rough-and-ready debut How Strange, Innocence. However, this new album somehow retains the most endearing traits of the aforementioned third album, too. And that’s what really pushes this effort over the top. It lets the drums out to play like the debut and lays the shimmering guitars on thick like The Earth…; it employs an increasingly random tact (How Strange, Innocence) yet ensures the compositions fit together snugly as a whole (The Earth…).

For those simply dying for a post-rock recharge in lieu of Godspeed’s sabbatical this is essential listening. In addition, much like Mogwai’s Mr Beast showed the Scottish group bearing new teeth, tracks like ‘Catastrophe And The Cure’ jump into cascading bliss intensely with nary a build-up, fixing on volume greedily like a veteran druggie shooting a hot nick of scag after a long sober period. This and other subtle changes yield another way to appreciate a band we all seem to appreciate regardless. Sure, good things come to those who wait, but that doesn’t mean we can’t all win from time to time, does it?