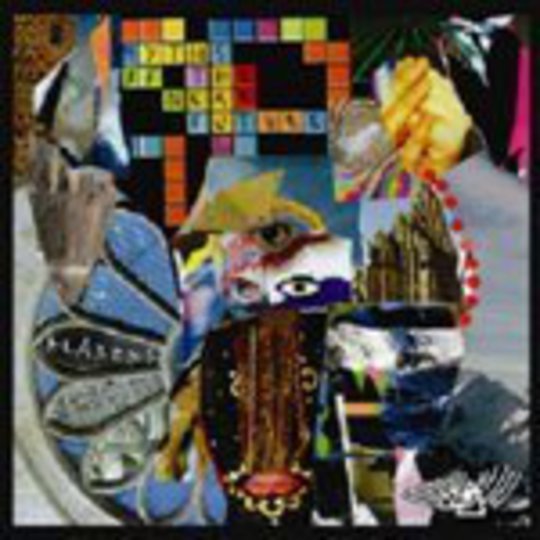 For one minute, let's have some perspective. Let us all take a step back from the hyperbole, the 'hype' and the coining of new genres. Genres invented with the sole purpose of allowing lazy journalists, chattering around tables in JD Wetherspoon public houses, to appear more 'on it' than their contemporaries.

We're now on neutral ground: this is Villa Park during a League Cup semi-final, or the venue where you dump your long-term partner, somewhere away from your respective houses. In front of us sits Myths Of The Near Future; it's the debut album by New Cross three-piece Klaxons. You've not heard of them before, and they've certainly not yet been lucky enough to secure coverage in every music publication going.

Opener 'Two Receivers' is dark and brooding; its production is wide, far-reaching and produces a track that, despite being overtly simple in structure and composition, engulfs the listener and everything around them. Where the magic of Klaxons appears to lie thus far, then, is in their Lego-like building of simple ideas into atmospheric pop songs. An album along these lines sounds fantastic, thankyouverymuch.

Of course, as soon as 'Atlantis To Interzone' starts screaming "DJ!" at me, the comfort zone they've ushered in is cast aside like an axe through the skull of a small child. In the best way possible.

As each track plays out more and more sides to this musical beast are revealed: the effortless radio-friendly pop of current single 'Golden Skans' gives way to the relentless electro-punk of 'Totem On The Timeline'. At every corner, the band seem to be able to surprise - be it with their oblique literary references, melodic prowess or just how massive they, alongside producer James Ford, have managed to make this album sound.

A few tracks down the line and ‘Magick’ reopens Klaxons' can of darkness, but penetrates every line with floor-quaking energy and rhythmic intensity. This is leftfield pop at its most daring and is all the more listenable for its risk-taking.

Let's now return to Earth. You know, where Klaxons actually are on the cover of every other newspaper and magazine, and have been for a few months. Having made the effort and cast aside the media's conceptions, I'm happy to report that their position is justified: Myths Of The Near Future is a brick through the window of your next door neighbour’s and the starting gun in a race to your nearest club. It's a really, really fucking good and danceable pop album that avoids changing lives, but happily enhances them.

And that cover version? Klaxons have catapulted 'It's Not Over Yet' from slightly embarrassing dance 'classic' into one of the most uplifting, epic pop songs of the year.

This isn't a rave record. It was never supposed to be. It's a wildly varying catalogue of melody and energy that eschews genre and scene in favour of songwriting and awe-inspiringly beefy production. Don't let anything get in the way of you picking up this record: it's expansive, free from pretension and easily one of the finest debuts of recent times.