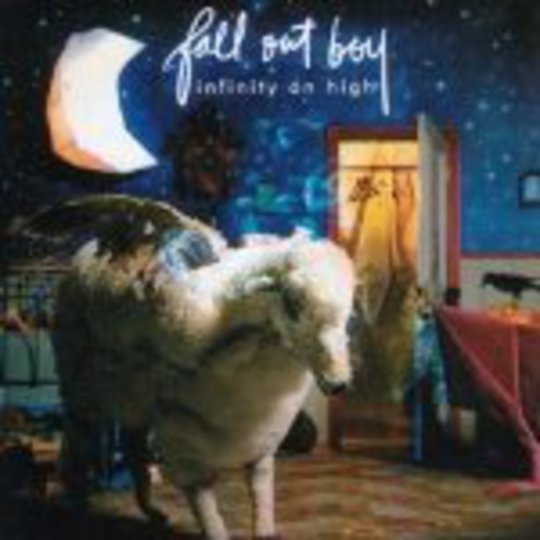 Britain really is a colloquial little place. In the same way we're obsessed with class and social hierarchy, we're also insistent on placing bands in boxes. With pretty little word ribbons wrapped around them. They do things differently in America. First of all, there is pop music. Then there is everything else.

Hence, our excitement and confusion on thoughts of * Fall Out Boy*, with their third record Infinity On High, going 'hip hop'. Naturally, these fears / hopes / comedic guffaws are suitably wide of the mark. Essentially, the inclusion of Jay Z on the opening track and the production duties of Babyface on a handful of songs acknowledge that rock music in the States is a less-ghettoised affair than it is on these shores. Dance, R‘n’B, hip-hop, rock – it's all popular music, and FoB are merely broadening their scope of potential listeners. It's an exercise in crossover marketing rather than an attempt to break new barriers.

Indeed, one of Babyface's tracks 'I'm Like A Lawyer With The Way I'm Always Trying To Get You Off' (for God's sake) sounds rather more like an early ‘90s power ballad. Actually, it sounds like Jimmy Eat World fronted by Michael Bolton. Yes, that means it's great. And while '_This Ain't A Scene, It's An Arms Race_' has a quasi mid-‘90s R‘n’B hook, don't be fooled: lyricist Pete Wentz's rumination on fads, scenes and niches are far more telling. Fuck your cool points, FoB are out of here and on their way to the Billboard stratosphere.

But, we digress. FoB have produced an album aimed at competing. Not with their assumed peers – the Chemical Romances and Panics of this world – but with every big band out there. U2, Green Day and the Chili Peppers are in their sights. They’re competing with pop music, entering a world where very few think twice of Billy Joe and Bono buddying up to sing for iTunes.

And to an extent, they've succeeded. This is as big, accessible and anthemic a record as those with a stake in a band would have hoped for. Crucially, too, they'll probably be keeping the majority of their existing fans whilst adding to them.

The reason why Fall Out Boy are king of whatever scene they're not really in is because they are lord statesmen of The Melody; they are the owners and gatekeepers of more killer tunes and charming chord progressions than anyone else on the black-hoodie and lip-ring circuit. And they know it. The short-term problem is that the world moves fast, and in our eyes they've got work to do to reclaim lost ground and add some. Hence the title of 'The Take Over, The Breaks Over', even if it does a) suffer poor grammar and b) occasionally sound like it's sung by Phil Collins on speedballs. Crucially, it's thrilling. In fact, it's almost that highest of all compliments in FM rock – it could almost be Montage Music. Yes.

Infinity On High is a record on which the band broadens their horizons. Whilst 'Carpal Tunnel of Love' contains enough screams and thrust to keep the middle-of-the-road hardcore kids on board and the maddeningly catchy 'Thnks Fr Th Mmrs' will sound familiar to those who stumbled upon this modern monolith of radio rock via Panic! At The Disco, the overall sound is polished, multi-accessible and very, very pop. As much as the ooompah theatrics of 'I've Got All This Ringing In My Ears And None On My Fingers' sounds like a nod to their competitors, the aforementioned ‘I'm Like A Lawyer…’ and ‘The Take Over, The Breaks Over’ are side-steps out of that world and a leap into pure, drive-time, fingers-tapping-on-the-steering-wheel headiness. Frankly these and the lead-off single sound more like Orson than anything commonly regarded as ‘emo’.

Naturally, this is part of the problem in attempting to love such a record. It’s a CD stuffed to the gill with great tunes, but little else. There's nothing to hang your heart on, as much as there's a huge amount to move your head and feet to. It's not an inherent problem, as long as you didn't previously hold Fall Out Boy particularly close to your chest. Think back to when Weezer went and released 'Beverley Hills'…

At 15 tracks long, there's some fat here that could have been trimmed – see the entirely functional ‘Bang The Doldrums’ or the pretty gash ‘Hum Hellelujah’ – but at just over 50 minutes long it's still a fairly abrupt musical punch in the face. And it's relentless, too: there's only one song in here that doesn't subscribe to excessive BPMs, and that's the pretty dull ‘Golden’. One suspects it’s included so that the band can take a breath, as much as anyone else.

And, of course, it's all wrapped up in Wentz's depressive-egomaniac lyrics – something which seems to piss off as many as those who subscribe wholeheartedly to them. But even lyrically it's a pretty harmless affair: there's no real bile or spite, just a series of strung-together epithets regarding the underdog, in spirit, emotion and actions. In fact, sometimes it's positively uplifting. Middle America is a more lucrative target audience than the truly disaffected anyway.

But… these criticisms seem to largely miss the target, as do the observations that it's not as adventurous a record as The Black Parade or as quirky an effort as A Fever You Can't Sweat Out. Nor, crucially, does it seem to have the same sense of awareness or humour that those records did, but be assured that Fall Out Boy probably don't care. They've got their eyes on the bigger prize, and there's something to admire in a band who realise that there's no way in hell they can pretend to be the underdogs anymore.

Albeit not that much to admire.