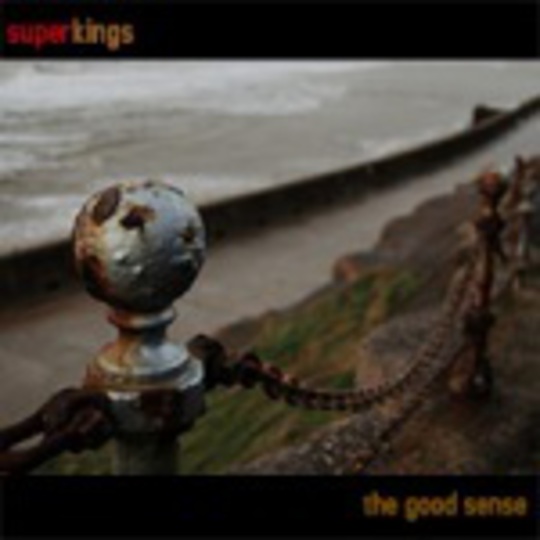 Superkings are a new act from the northwest of England on the independent label, Feedback Records. I caught them live while reviewing an In The City showcase for DiS a few weeks back and was very impressed, so I was more than especially keen to give this three-track single a spin.

And I wasn’t disappointed. _ ‘The Good Sense’ gallops along with a killer melody at the reins, carrying with it the falling-over-themselves lyrics that don’t stray too far from the darker side of life that seems to characterise Superkings’ world. The accompanying tracks are more sombre in mood, but are as immediate and memorable as _‘The Good Sense’, and all three tracks reveal a band with tremendous musical and lyrical depth, which is allied to a genuine flair for dramatic storytelling. The grittiness of the lyrical content, powerfully delivered by lead singer David Wright in what is a very distinctive northern drawl, is expertly counter-pointed with the beautiful and complex musical arrangements that expertly rack up the emotional tension.

This is a band with a great deal going for them, even if they might not be producing what is ‘in vogue’ at the moment. It’s true to say that Superkings will be difficult to pigeonhole easily for the big boys’ liking, but they will without doubt appeal to a wide audience with what is, at the moment at least, an unusual, distinctive and refreshing mix of Bowie, Paul Simon, Nick Cave and Tom Waits. Their sound is both timeless and contemporary, naturally straddling the alternative and the mainstream without the need for compromise. Given the right promotion and exposure, one can certainly see a bright future for them.

The band’s debut album, due out in February next year, should be well worth checking out.