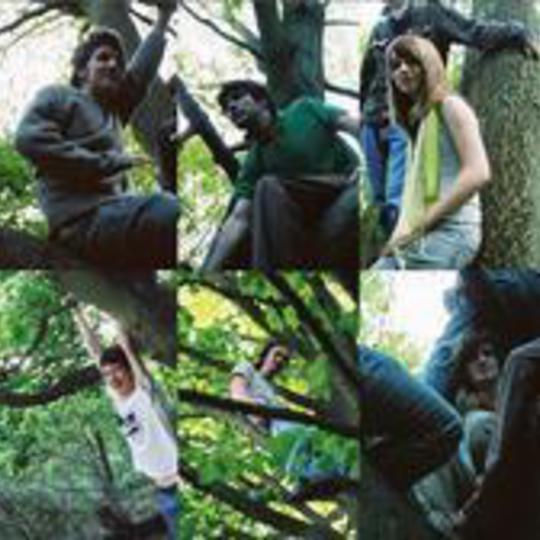 Select one band for your new label’s debut release? I think not! This, the first offering from new London indie Run For Your Life, houses four bands on a single seven-inch slab o’ waxy musical goodness.

Three of the four – Guns Or Knives, FalenizzaHorsePower and Bottlenose Dolphins – fill a side, with the flip the exclusive domain of Tunbridge Wells-based sextet Cats And Cats And Cats (pictured). Perhaps you’ve heard of the latter – DiS put them on with Jeniferever earlier this year – but if, like me, the remaining trio are unknowns, you’re in for a treat.

Cats…’s ‘Fight Fight With Fight’ is a cut from their Sweet Drunk Everyone album – you can hear it here and judge its jerkily artsy merits for yourself. For the record, it’s probably the most ‘accomplished’ offering here; or at least, it’s the one you’ll return to most often. Of their brothers-in-split, Bottlenose Dolphin’s thud-thud riff-riff two-piece rawk ‘n’ crawlawaybeaten is certain to appeal to anyone that remembers Load Records’ Pink & Brown. Lightning Bolt are among their top MySpace friends – that’ll probably tell you something about their approach to bombast on ‘The Mpange’.

The oddly-named FalenizzaHorsePower – if anyone wishes to explain that, please do – scream and holler like a kiddie Fugazi, pounding at their skins as if doing that’s the only thing that’ll keep the Earth turning. It rumbles and splutters, spits and kicks, awkwardly but endearingly so. Fuzzily lo-fi, their ‘Killian’ is the pick of these three-on-one-side songs. Which leaves Guns Or Knives, who also holler into their microphones, seemingly from across the other side of a fuck-off huge aircraft hanger. Once their clatter kicks in, the effect’s an out-of-you-seat jolt to the nervous system, but it’s a short-lived sensation. Too brief and too compositionally haphazard to really make an impact, ‘Progress Progress Progress’ is the weakest of these four songs.

But, considering the variety and overall quality of this release, it’s warmly recommended. Welcome to the business, Run For Your Life. Let’s hope you never have to from the vultures keen to pick at the carcasses of your for-the-love wares.